Please ensure Javascript is enabled for purposes of website accessibility
Log In Help Join The Motley Fool
Free Article Join Over 1 Million Premium Members And Get More In-Depth Stock Guidance and Research
By Will Ebiefung - Feb 8, 2021 at 10:59AM

The short-squeeze movement is melting down. Which companies will be hardest hit?

In late January, retail investors drove up the share prices of heavily shorted companies in an attempt to trigger short squeezes. Now the meme stock movement is melting down, leaving many speculators with massive holes in their portfolios. Unfortunately for some, the pain could be just beginning.

AMC Entertainment (AMC -8.03%) and GameStop (GME -3.56%) are likely to face continued declines this week because of their weak fundamentals. Let's explore the reasons investors should avoid these stocks. 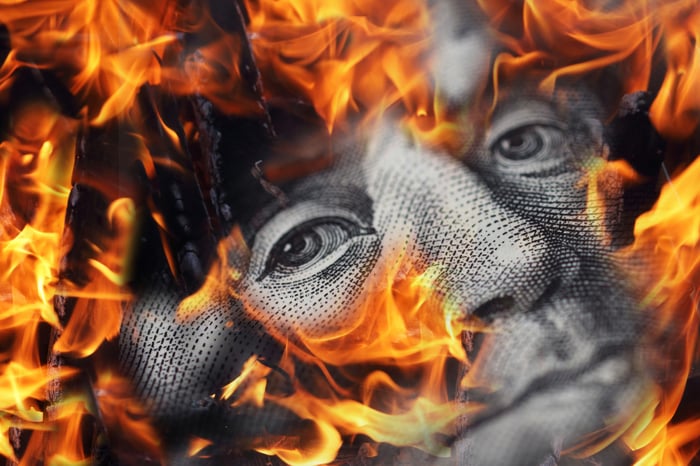 AMC's recent rally was about more than just a speculative short squeeze. On Jan. 25, the company announced that it had completed capital raises for $506 million in equity and $411 million in new debt. CEO Adam Aron used this as an opportunity to reassure the markets by stating, "Any talk of an imminent bankruptcy for AMC is completely off the table."

But while AMC has successfully kicked the bankruptcy-protection can down the road, the stock isn't suddenly a good investment. Capital raises dilute investors' existing shares by reducing their claims on future earnings -- which can be even more painful if the money goes toward sustaining losses or paying down debt instead of creating value.

Third-quarter revenue collapsed 91% year over year to $119 million -- that's better than the 99% decline reported in the second quarter, but not much evidence of a healthy recovery. In fact, theater attendance may never recover to its prior levels. Box office ticket sales have declined at an annual rate of 1.4% since 2002, and the pandemic may have accelerated the trend toward video on demand, similar to the way brick-and-mortar retail saw the sales trend toward online accelerate in recent years.

Like AMC, GameStop stock also enjoyed a short-term price surge, but the rally is already collapsing. Per-share prices are down roughly 87% from their all-time high of $483 set in late January. And investors could be in for even more losses because GameStop operates an outdated brick-and-mortar business model. Unfortunately, its pivot to digital sales is not helping stem its relentless cash burn.

GameStop's third-quarter net sales fell 30% to $1 billion because of the lingering impacts of the coronavirus pandemic, which limits consumer access to its stores. But the decline is part of a longer-term trend that saw sales fall at a compound annual rate of 8% from fiscal 2015 to 2019.

As with movies, customers are eschewing traditional brick-and-mortar businesses in favor of online alternatives.

GameStop is trying to adapt to the digitization trend. Management reports that e-commerce grew 257% to represent 25% of sales in fiscal 2020, but so far this is not improving the company's bottom line. Operating losses expanded from $45.6 million to $63 million in the third quarter. And gross profit margin fell from 31% to 28%. Management blames high shipping costs and online credit card fees for the weakness -- this suggests the growing e-commerce business could be partially to blame.

AMC and GameStop have a lot in common. Both experienced short squeezes, and both are struggling to adapt to the trend of digitization in their respective industries. While hyped-up comeback stories can be tempting, investors should avoid these stocks until they show convincing evidence of turning the ship around.