Please ensure Javascript is enabled for purposes of website accessibility
Log In Help Join The Motley Fool
Free Article Join Over 1 Million Premium Members And Get More In-Depth Stock Guidance and Research
By Rekha Khandelwal - Feb 9, 2021 at 9:06AM

The stock has surged by about 325% in the last three months.

Renewable energy companies will have an increasingly bigger role in meeting the world's energy needs as it transitions away from fossil fuels. Based on this, almost all renewable energy companies are getting increasing investor support. The share price of renewable natural gas seller Clean Energy Fuels (CLNE -0.61%) has zoomed upward by nearly 325% in just the last three months. Some recent developments have made investors more excited about the company's prospects. Let's see if Clean Energy Fuels stock is a buy at current levels.

While the company's gas volumes have grown over the years, the same can't be said about its revenue and profits. 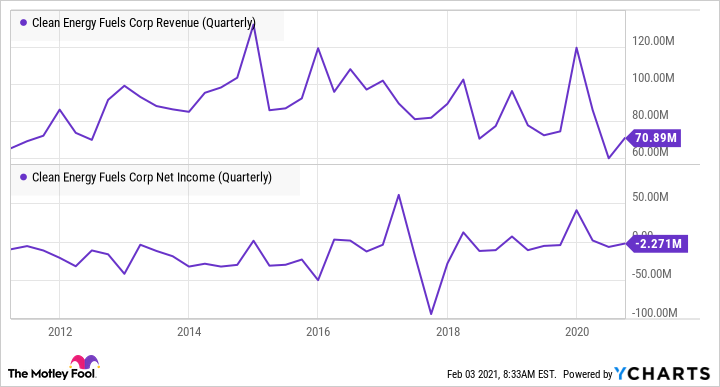 Clean Energy Fuels' revenue over the last five years is on a slight downward trend -- an alarming sign. Moreover, the company has largely generated losses over the past several years.

Clean Energy Fuels is the largest supplier of renewable natural gas as a transportation fuel in the U.S. It is important to understand the reasons why the company's revenue has been falling over the years.

First, the company has been witnessing lower demand from its key heavy-duty truck market. Operators aren't seeing much of an incentive to switch to natural gas, as its lower fuel efficiency compared to gasoline or diesel may substantially erode any financial gains resulting from lower natural gas prices.

Second, the decline in the prices of gasoline and diesel since mid-2014 have reduced the appeal of natural gas as a vehicle fuel and restricted its growth. At the same time, lower gasoline and diesel prices have put pressure on Clean Energy Fuels' gas pricing, and margins. Lower gas prices have more than offset the positive impact of volume growth on the company's revenue.

Finally, governments and environmental regulators are increasingly focused on promoting the use of electric vehicles as a way to reduce carbon emissions. This has restricted the demand growth for renewable natural gas, especially in the light vehicle segment, due to the resulting unpredictability regarding the potential use of natural gas as a vehicle fuel. More broadly, this has resulted in a much slower growth in infrastructure, such as gas filling stations, further restricting growth of all types of gas-powered vehicles. 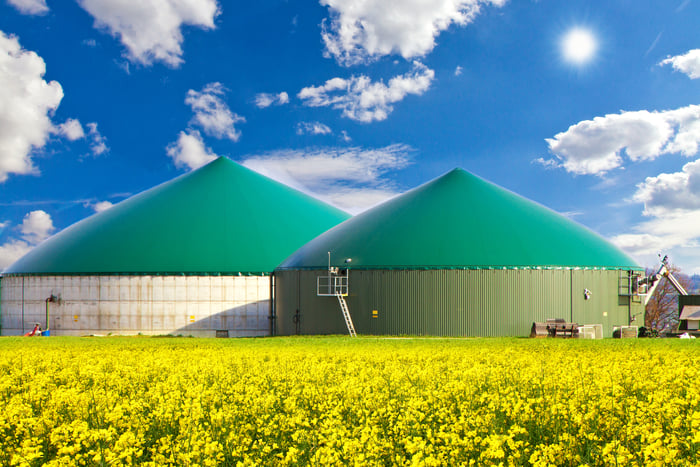 On the flip side, a couple of factors could support Clean Energy Fuels' growth. First, Congress recently extended the alternative fuel tax credit. While that's a positive, it was just a one-year extension of an already existing tax credit. If that hasn't supported Clean Energy Fuels' revenue growth so far, it is unlikely that it will make a major difference in terms of its growth in the future. However, it does suggest a positive policy environment for the company.

Second, Clean Energy Fuels recently entered into partnerships with Total and BP to develop renewable natural gas infrastructure. In 2018, Total acquired a stake of around 25% in Clean Energy Fuels. While these partnerships will provide the company with funding to develop renewable natural gas production facilities, the low demand challenge remains. Moreover, the economic viability of these planned ventures is unknown.

It's unclear how much demand there will be for renewable natural gas. Additionally, Clean Energy Fuels is finding it difficult to grow its top line. These issues alone are enough to make me a bit skeptical about buying its stock. Add in the fact that its price to earnings ratio has surged to nearly 76, and Clean Energy Fuels becomes a stock that I will surely only watch from the sidelines for now.