Please ensure Javascript is enabled for purposes of website accessibility
Log In Help Join The Motley Fool
Free Article Join Over 1 Million Premium Members And Get More In-Depth Stock Guidance and Research
By Billy Duberstein - Feb 10, 2021 at 7:55AM

I couldn't be more comfortable with my Amazon stake, even with Bezos stepping down as CEO. Here's why.

Despite posting blowout earnings last week, Amazon (AMZN -0.03%) slipped a bit after its fourth-quarter earnings report. Of course, the price action wasn't surprising, considering both Amazon's huge run over the past year and the announced retirement of founder and CEO Jeff Bezos.

Bezos is in the running for the greatest CEO of all time, growing Amazon from an idea to a $1.7 trillion behemoth in just 26 years. It's no wonder that investors are a little nervous about him leaving the top spot.

Still, I'm not worried at all, and will comfortably continue to hold my Amazon shares. Here are four reasons why. 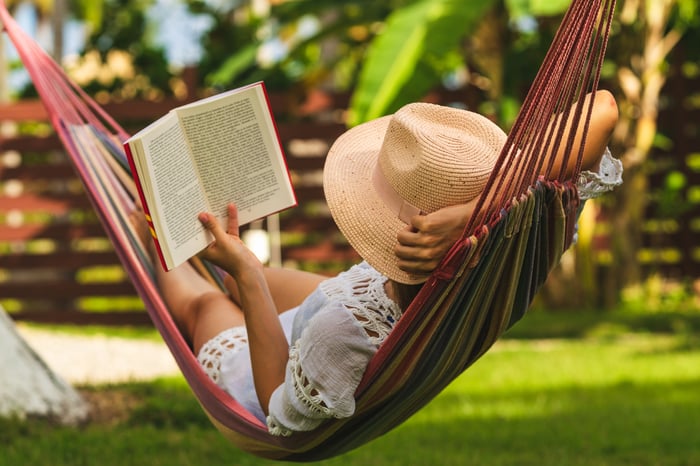 No. 1: New CEO Andy Jassy is a Bezos clone

Amazon shareholders should be quite comfortable with Andy Jassy stepping into the role. Jassy is a Harvard Business School grad who came to Amazon all the way back in 1997. Initially in the marketing department, Jassy was later put in charge of Amazon's venture into selling CDs (remember those?).

In 2002, Bezos asked Jassy to be his "shadow" -- effectively, Bezos' chief of staff. Jassy held that role for 18 months. In a recent interview, Jassy said, "I thought I had very high standards before I started that job... And then, in doing that shadow job, I realized my standards weren't high enough."

Jassy eventually launched Amazon Web Services in 2006, officially becoming CEO of the important unit in 2016. Obviously, Jassy has been an incredible and visionary leader here, growing AWS from an idea to a growing $51 billion run-rate business with operating margins near 30%. As the IT infrastructure for start-ups, large enterprises, and governments alike, AWS is one of the most important businesses in the world.

With a long history of success, a work history steeped in Amazon's uniquely customer-obsessed culture, and Bezos' blessing, Jassy should inspire confidence in Amazon investors.

No. 2: Bezos' role may not be that different going forward

Bezos is known to be detail-oriented and very hands-on. It's quite possible that his new role as executive chairman will be similar to his CEO role. After all, Bezos has pledged to stay involved in many early stage Amazon initiatives, while also devoting more time to his other passion projects, including space company Blue Origin, the Bezos Earth Fund, the Day 1 Fund, and The Washington Post.

Bezos has already been involved with these other organizations for years, periodically selling Amazon stock to fund them. As CEO of a massive global business with over a million employees, Bezos has probably concerned himself only with high-level functions for some time. Amazon CFO Brian Olsavsky noted that Bezos will still be involved with some aspects of the company. As executive chairman, Bezos will still be consulted on any "one-way door" decisions -- that is, major decisions that can't be easily reversed. "Jeff is not leaving, he is getting a new job," Olsavsky said.

Bezos assuming the executive chair role isn't a drastic break from the recent past. Bezos' continued presence on the board indicates Amazon isn't in much danger of a "brain drain" anytime soon.

No. 3: Amazon's businesses are firing on all cylinders

It would also be one thing if Amazon's businesses were slowing down right as Bezos left the CEO role, but that's not the case. In fact, Amazon's recent results blew out already-high expectations. Due to the pandemic and Amazon's continued efforts to make shipping faster (one-day delivery is now available for many items), Amazon has become the ultimate essential business.

In the fourth quarter, Amazon shattered analyst expectations, growing revenue 43.6% to $125.55 billion, almost $6 billion more than anticipated. It earned $14.06, nearly double the EPS expected by Wall Street analysts. Amazon's business units were strong across the board, with accelerating domestic and international sales in its online stores across first- and third-party sellers. It also showed strength in its higher-margin AWS and advertising businesses.

No. 4: Amazon's peers have done quite well since their founders left

The last reason to be bullish on Amazon's future is the outstanding performance of some of its large-cap technology peers since their founders left. Both Microsoft (MSFT 3.20%) and Apple (AAPL 4.01%) have performed exceedingly well since respective founders Bill Gates and Steve Jobs exited the top posts. Bill Gates stepped down in 2008, and Jobs stepped down in 2011. Yet here are both stocks' performances over the past 12 years. 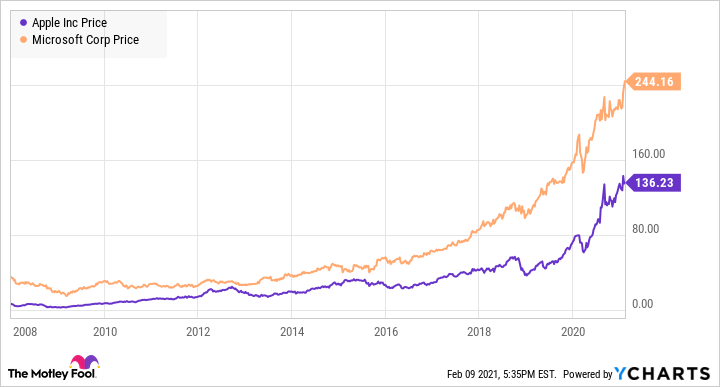 Yes, Microsoft slipped during the Ballmer era's ill-advised attempt to enter the mobile business -- but it recovered quickly once it used its large moat in enterprise software to compete fiercely in the cloud under Satya Nadella.

Under Tim Cook, Apple has improved the iPhone, which first launched under Steve Jobs. These upgrades have made it a truly sticky platform. With that moat intact, Cook has done an excellent job of inventing high-margin services with recurring revenue and massive appeal for Apple's installed base of loyal customers. Cook has also taken Apple's brand halo and grown a significant AirPods business to supplement Apple's base of phones, computers, and tablets. Finally, Cook has finished Jobs' mission of producing in-house semiconductors with proprietary designs, such as Apple's new M1 chip that displaced Intel in the latest generation of Macs.

Like Microsoft and Apple, Amazon clearly has an enormous economic moat, a deep bench of very smart people, and still-incredible growth prospects. Bezos is stepping back, but he'll still have an impact on the company he founded for many years.

Amazon shareholders should therefore remain confident in Amazon's prospects. Those without a position may wish to take advantage of the stock's relative flatlining since last summer to pick up shares of this best-in-class tech stock.