All three of these companies have a durable competitive advantage.

According to the Nilson Report, Visa operates the world's largest payments network, connecting financial institutions, merchants, and consumers in over 200 countries and territories. To put Visa's size in perspective, for every $1 spent by consumers in physical locations (offline), $0.15 goes through Visa's network; and for every $1 spent online, $0.43 goes through Visa's network. That's mind-boggling. 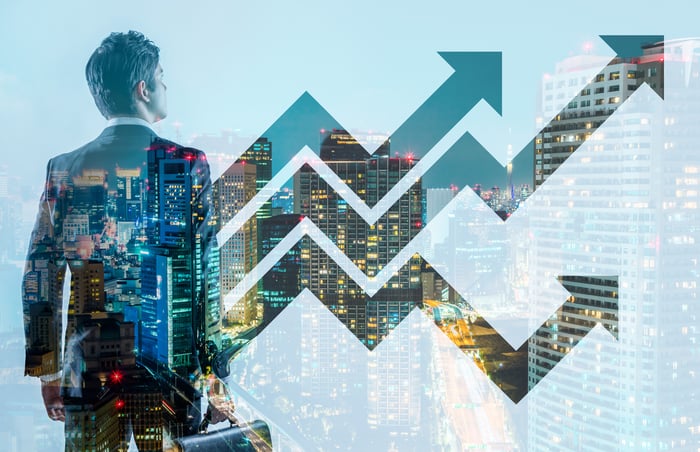 Despite this incredible scale, management still sees a big market opportunity. According to CEO Al Kelly, $18 trillion in global consumer payments still take place in cash and check each year. Visa is pursuing this market by expanding partnerships with financial institutions and fintech companies like Square and PayPal Holdings.

What's more, Visa sees a $185 trillion opportunity in account-based payments like business-to-business (B2B) and peer-to-peer (P2P) transfers. In this market, Visa has aggressively built out its bank-to-bank and real-time transfer capabilities with acquisitions like Earthport and YellowPepper. In fact, the company can now reach roughly 90% to 95% of the world's banked population.

Even with pandemic-related headwinds, Visa's revenue growth has been strong over the last five years. In addition, the company's global scale and solid competitive position have helped Visa expand its operating margin.

In the years ahead, as digital payments continue to increase in popularity, Visa's business should continue to grow and reward shareholders.

This tech giant is one of the most valuable companies in the world, with products that range from software to cloud computing to gaming content. However, Microsoft is perhaps best known for Windows, the most popular desktop operating system in the world, and Microsoft 365, a market-leading suite of subscription-based software that includes productivity applications like Word, PowerPoint, and Excel.

Microsoft has also doubled down on cybersecurity. The recently rebranded Microsoft Defender protects endpoints, emails, and identities, while Azure Defender secures cloud workloads (applications run on remote servers). The company recently announced it has over 400,000 security customers, generating $10 billion in security revenue in the past year. While that's a small portion of Microsoft's top line, the cybersecurity industry is growing quickly and Microsoft's scale means the company is well positioned to benefit.

As proof of its strong competitive position, Microsoft has managed to not only grow revenue quickly, but also to expand its operating margin. This is a result of Microsoft's trusted brand name (which creates pricing power) and Microsoft's highly scalable software and cloud computing businesses. Similar to Visa, the end result is twofold growth in profitability -- revenue is increasing and a greater portion of that revenue is reaching the bottom line.

Last year was rough for Disney. The pandemic kept parks like Disney World and Disneyland closed or at reduced capacity, which led the company to post its first loss in roughly two decades. But there is a silver lining -- Disney is in the midst of an incredible transformation.

Historically, the company's media business has earned revenue through linear television networks like ABC, ESPN, and the Disney Channel. But these legacy formats are being replaced by streaming services. So, as a highly innovative and forward-thinking company, Disney launched its own direct-to-consumer service, Disney+, in November 2019. Disney+ features the company's animated classics alongside media from Marvel, Lucasfilm, and Pixar. Put simply, Disney owns the most valuable portfolio of media content in the world, including titles like The Lion King, Frozen, Star Wars, and The Avengers. In fact, Disney has produced seven of the top 10 highest-grossing films of all time. That's an incredible competitive advantage, and it should make Disney a long-term winner in this market.

According to CEO Bob Chapek, the adoption of Disney+ during the first year surpassed the company's wildest expectations. As of December 2020, Disney reported 86.8 million subscribers. By comparison, Netflix ended 2020 with over 203 million subscribers. In other words, in just over one year, Disney has become the second most popular streaming service in the world.

Here's the bottom line: Disney has plenty of room for growth. The company plans to launch 10 Marvel series, 10 Star Wars series, and more live-action and Pixar content in the next few years. That should help Disney continue to add new subscribers at a rapid rate. In fact, management estimates that between Disney+, ESPN+, Hulu, and the soon-to-launch Star service for international markets, Disney will have a total of 300 million to 350 million subscribers by 2024. That's why Disney looks like a good place to invest your money.