Please ensure Javascript is enabled for purposes of website accessibility
Log In Help Join The Motley Fool
Free Article Join Over 1 Million Premium Members And Get More In-Depth Stock Guidance and Research
By Dan Caplinger - Feb 19, 2021 at 5:19AM

If you own winning stocks, Berkshire Hathaway's legendary investor has a valuable lesson for you.

Many regard Warren Buffett as the greatest investor of all time. The long-term track record of his insurance conglomerate Berkshire Hathaway (BRK.A 0.07%) (BRK.B 0.04%) is nearly unparalleled, and few still alive have the breadth of experience that the 90-year-old Omaha native has about all things Wall Street.

Earlier this week, investors found out the latest moves that Buffett has made with Berkshire's stock portfolio. Once again, Berkshire revealed that its biggest holding by far was Apple (AAPL 0.00%), but the company made some modest moves in handling what's been a huge winner for the insurance company. Below, we'll look more closely at exactly how Buffett has managed his portfolio's biggest stock winner and what it can teach you in handling your own investments.

A brief history of Buffett and Apple 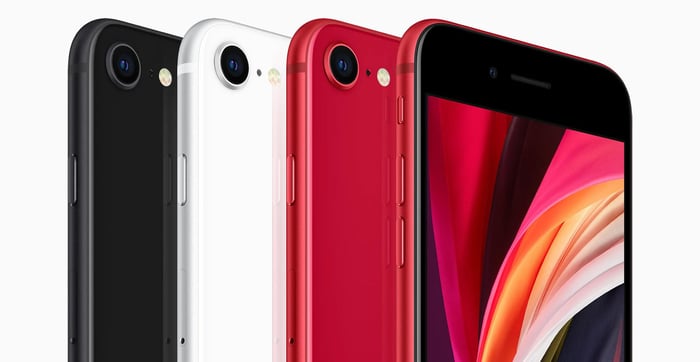 The following two years saw even more buying. Berkshire held 661 million shares by the end of 2017, and its holdings topped the 1 billion share mark at year-end 2018. During 2019, share counts rose and fell gradually but stayed around 1 billion shares.

All this time, Apple's stock price was on the rise. With shares worth $29 at the end of 2016, Berkshire's total position was worth about $6.6 billion. 2017 brought a nearly 50% rise in the stock to $42 per share, and the growth in Berkshire's holdings sent the total value to nearly $28 billion. By the end of 2019, a further combination of rising Apple stock prices and expanded share holdings meant that Buffett held roughly $73 billion in Apple stock.

Over the course of 2020, Buffett started to trim back his stake in Apple. A modest sale announced in the first quarter of 2020 was followed by further reductions in subsequent quarters. By the end of the year, Berkshire was down to 887 million shares of Apple stock.

However, once again, Apple shares have soared. At its closing price around $130 per share on Feb. 18, the value of Berkshire's stake has risen to $115 billion.

Buffett's sales have been interesting because they've essentially freed up cash that he's used in other places to diversify his portfolio. In the third quarter of 2020, he concentrated on pharma stocks like AbbVie and Bristol-Myers Squibb. In the fourth quarter, he added substantial positions in Dow stocks Verizon Communications and Chevron.

Yet the trimming hasn't actually reduced the dollar amount invested in Apple. Because the iPhone maker has continued to rise, Buffett's total Apple holdings have stayed relatively constant in dollar terms.

How to handle your winners

Many individual investors run into the same issues that Buffett has with Apple. If you pick a stock that does extremely well, it can make up an ever-increasing portion of your portfolio. Eventually, you can end up with such a large concentration that it creates immense risk. If something happens to reverse that stock's fortunes, you can suffer huge losses.

Yet selling your entire position prevents you from getting any further gains. It also means a big tax hit if you own your stock in a taxable account. That's true for Buffett, as well, as Berkshire pays taxes on capital gains from selling his positions.

A happy medium is to use big winners as a source of cash for new stock ideas. If the stock keeps rising at least 5% or 10% per year, then trimming 5% to 10% of your position each year should keep your value invested in that stock stable. Ideally, you can then find even bigger winners to deploy the proceeds and keep your portfolio performing as well as possible.

Handling winning stock positions can be a tricky balancing act between fear and greed. Buffett's approach with Apple is one that any investor can follow to provide peace of mind along with the potential for continued strong future returns.