Please ensure Javascript is enabled for purposes of website accessibility
Log In Help Join The Motley Fool
Free Article Join Over 1 Million Premium Members And Get More In-Depth Stock Guidance and Research
By James Brumley - Feb 23, 2021 at 6:37AM

Income-minded investors don't have to settle for lackluster payouts right now. They just have to widen their field of view.

With interest rates still hovering just above the record-low levels reached last month, dividend stocks have adjusted accordingly. The S&P 500's current average yield of around 1.5% is also at an all-time low, save for the brief period it was slightly lower in the early part of the recession following the post-dot-com crash of 2000. Investors seeking new income opportunities aren't enjoying a large number of great options.

Not all hope is lost, however. Anyone willing to venture a little off the beaten path can still find a handful of companies dishing out above-average dividends. Here's a rundown of three such businesses sporting yields at or above 5%. 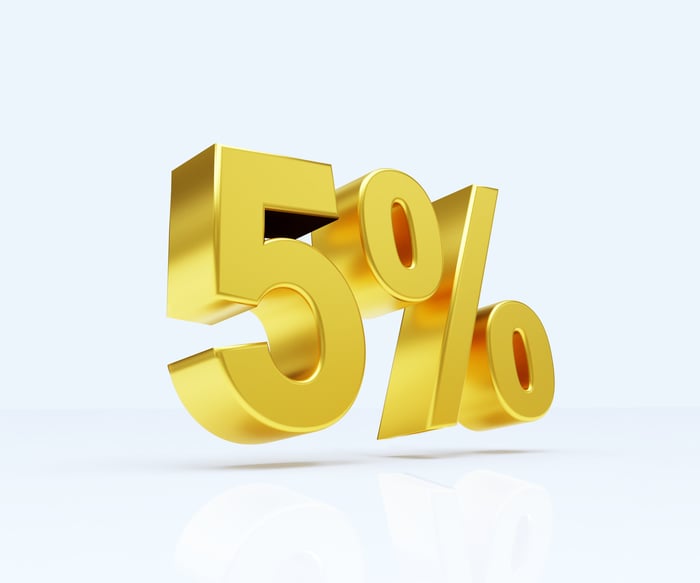 Insurance stocks were given some rough treatment at the height of the COVID-19 crisis, for understandable reasons. Aside from the prospect of surging healthcare bills and life insurance payouts that may have been prompted by the pandemic, a bunch of companies were also protected by business continuity coverage that could have meant costly payouts for insurers. Prudential Financial (PRU 4.00%) was no exception to this headwind. As we look back at the fallout from the pandemic, however, we can see things never hit their feared rock bottom.

Yes, Prudential was substantially in the red in the first and second quarters of 2020, reporting net losses of $271 million and $2.4 billion, respectively. Those losses aren't the result of surging payouts, though. Rather, they're GAAP losses mostly linked to soured investments resulting from the market's meltdown once COVID-19 hit in United States; the insurer reported nearly $700 million worth of investment losses in Q1 and $2.7 billion in Q2. Actual operating income fell from $3.0 billion to $2.0 billion during the six-month stretch, but the company remained operationally profitable in a tough environment. It's more than recovered in the meantime, too. Prudential's fourth-quarter adjusted operating income of $2.93 per share improved on the year-earlier comparison of $2.24, which is more than enough to cover the dividend of $1.15 per share declared during the quarter.

Investors are slowly figuring out that Prudential is not only surviving the pandemic, but may even benefit from a flood of new business because of it. With the stock still trading below its pre-pandemic high, however, the yield for new buyers is a healthy 5.5%.

Whereas most dividend-paying stocks have seen their yields dragged lower of late, utility stocks have been a curious expectation to this norm. But most of these companies haven't seen their payouts hold above the 5% mark, save one -- South Jersey Industries (SJI 0.47%).

It's not a household name. The $2 billion entity only serves around 700,000 natural gas customers in (as the name would imply) the southern portion of New Jersey. It also operates a clean-energy management business, although its core business is providing natural gas to retail consumers.

It's the perfect business model for funding regular dividends. People may postpone a vacation or skip a trip to the mall, but they're going to keep their heat on and keep the water hot. To this end, South Jersey Industries hasn't failed to pay a dividend in any quarter since 1978.

That's not even the most impressive reason an income-minded investor might want to consider this company. Better still is the fact that if you can remove the impact of several stock splits, the company has improved its payout in most years since 2000.

And investors fearing this small utility player isn't big enough to keep up with the world's capital-intensive transition to even cleaner renewable energy sources need to worry. South Jersey Industries is positioning itself properly. In December the company announced it was forging a partnership with Atlantic Shores Offshore Wind to explore hydrogen power and how that technology can be melded with the natural gas business. South Jersey Industries has its place in the future bookmarked.

Finally, add Orange S.A. (ORAN 1.79%) to your list of high dividend yields worth buying into.

Like South Jersey Industries, Orange isn't exactly a household name, although for a different reason. Orange is a leading telecom service provider in Europe, North Africa, and the Middle East, and is the market leader in France, where it's based. It not only adds some international exposure to U.S. investors' portfolios, but it brings relatively steady income to the table as well.

Don't read too much into that message. While the company is committed to making regular dividend payments, it's not outright married to a particular figure or cadence of payout growth. Fluctuations in exchange rates only make its biannual dividends less consistent for owners of the ADR version of the French-listed stock.

Still, the telco is zeroing in on a business that should stabilize its revenue stream and subsequent cash flow. Orange S.A. announced just a few days ago that its cellphone tower company has been renamed TOTEM, and while its chief customer will initially be Orange, the company ultimately aims to lead the aggregation of Europe's mobile/wireless towers into one operating entity. Think something along the lines of American cell tower companies like American Tower or Crown Castle International, except privately owned by a publicly traded parent also in the telecom business. It could take years for the idea to fully blossom, but with a yield north of 6%, it may be worth the wait.

Why This Could Be a Great Stock for Income Investors