Please ensure Javascript is enabled for purposes of website accessibility
Log In Help Join The Motley Fool
Free Article Join Over 1 Million Premium Members And Get More In-Depth Stock Guidance and Research
By Daniel Foelber - Feb 23, 2021 at 7:31AM

Dividend raises and earnings growth are on the horizon for Waste Management and Sherwin-Williams.

Economic jitters and valuation concerns have pressured the broader stock market, resulting in a bit of a sell-off the last couple of days. While no one likes losing money, it's important to remember that pullbacks can actually be healthy in the long run. Warren Buffett is famous for his excitement during downturns, saying that because he's a net buyer of stocks over the long term he likes it when valuations go down.

However, if you're like other income investors and retirees, chances are you want stable and reliable income-generating assets that won't cut their dividends or suffer massive earnings declines. Integrated recycling and trash management company Waste Management (WM -0.43%) and paint giant Sherwin-Williams (SHW -1.70%) are boring but incredibly safe dividend stocks worth adding to your portfolio right now. Here's why.

All things considered, North America's largest trash collector, Waste Management, had a great year. It increased its annualized dividend from $2.05 per share to $2.18 per share. 2020 adjusted revenue was down less than 2% compared to 2019. Adjusted net income was down around 9%, but free cash flow (FCF) rose a hefty 26%. That's great news for dividend investors because FCF can be used to raise the dividend, reinvest in the business, and buy back shares. Waste Management intends to do all of that in 2021.

After halting its share buyback program, the company announced it was carving out $1.35 billion in 2021 for potential buybacks, a sign that it is confident in its ability to generate tons of FCF in 2021. Waste Management is guiding for around $2.3 billion in 2021 FCF and plans to raise its dividend to $2.30 per share -- giving the stock a yield of roughly 2%. A $2.30-per-share dividend would cost the company $975 million, which is less than half of its anticipated FCF. It would also mark its 18th consecutive dividend increase, putting it within striking distance of being added to the coveted list of Dividend Aristocrats.

Waste Management is one of the safest industrial dividend stocks because it can generate stable earnings even during recessions (thanks to its predictable and diversified revenue mix). It can also raise its dividend without straining its FCF -- freeing up extra funds to make timely acquisitions and buy back shares. Its consistency and stability are rare since industrial stocks tend to boom and bust with the economy. And finally, Waste Management benefits from one of the most surefire tailwinds around: consumerism. A growing population and economy mean rising residential and industrial trash and recycling needs, which in turn, give Waste Management more business. Add it all up and there are few dividend stocks that are more reliable than Waste Management.

Similar to Waste Management, Sherwin-Williams is one of the more consistent industrial stocks. Folks familiar with Sherwin-Williams likely know it for its name-brand paint but it has several other consumer brands and dominates the residential and industrial paint and coatings market, too.

Sherwin-Williams' diversified revenue mix helped the company withstand pandemic-induced headwinds in 2020. Its Sherwin-Williams-branded Americas Group posted a small increase in sales, the industrial coatings division was down just 2.5%, but sales in its generic consumer brands group were up 14% thanks to a surge in home improvement projects. However, all three divisions posted year-over-year revenue increases in the fourth quarter, a good sign for 2021. All in, the company notched record-high revenue, a 34% increase in diluted net income, and record operating cash flow. It used $2.93 billion of its $3.4 billion in net operating cash to pay dividends and buy back stock.

Looking ahead to 2021, Sherwin-Williams is forecasting diluted net income per share to be around $24.27, 10% higher than a strong 2020. It's also planning on raising its dividend by a staggering 23.5% to $6.62 per share. Shares of Sherwin-Williams yield less than 1%, but the company's strong performance, industry-leading gross margin, and ability to capture value across its business lines have helped its shares outperform the market over the past 10 years. The company is also a Dividend Aristocrat, having raised its dividend for 29 consecutive years. 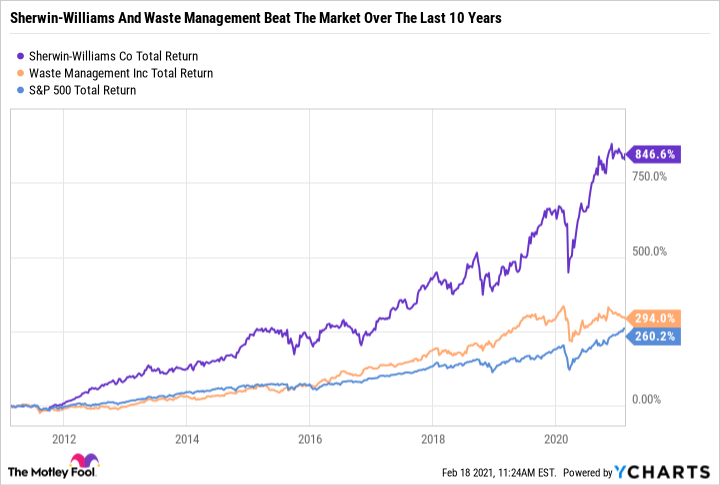 Waste Management and Sherwin-Williams are two of the safest industrial stocks on the market today. And they are actually quite similar despite being in completely different industries. Both companies have their fair share of upside and benefit from a growing economy, while uncorrelated revenues protect against downside risk. This balance separates the two companies from other safe dividend stocks like pipeline companies or consumer staple titans that share Waste Management's and Sherwin-Williams' consistency but lack their upside potential. Income investors searching for conservative opportunities in the industrial sector should look no further than these two stocks.