Please ensure Javascript is enabled for purposes of website accessibility
Log In Help Join The Motley Fool
Free Article Join Over 1 Million Premium Members And Get More In-Depth Stock Guidance and Research
By Jennifer Saibil - Feb 24, 2021 at 7:20AM

And they may double your money this year again.

2020 will be remembered for many reasons, and one of them is crazy highs and lows in the stock market. Some businesses were forever ruined, but others had fantastic gains. The digital revolution was accelerated by the pandemic, and many companies with a digital focus had skyrocketing growth over the past year. Both Etsy (ETSY 4.80%) and Fiverr International (FVRR 11.49%) stock had outstanding gains, and it's not over.

Etsy entered the mainstream during the pandemic as customers flocked to the online platform for handmade masks and other customized products. Revenue and gross merchandise volume both increased more than 100% in the second and third quarters, and while masks were an important part of the overall picture, nonmask sales were strong as well. 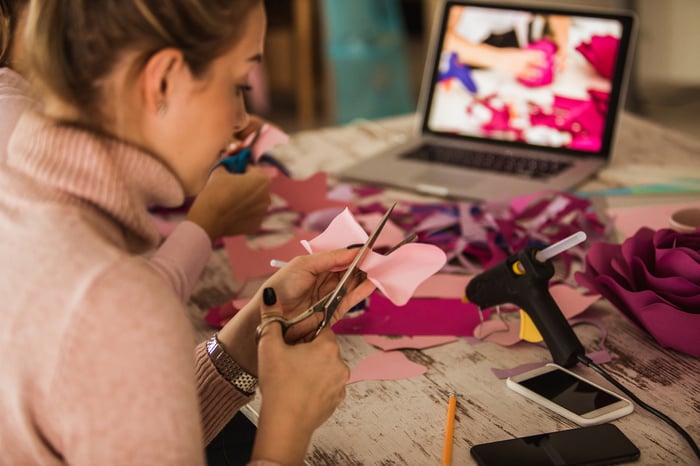 In the second quarter ended June 30, Etsy made some adjustment to its platform to make purchasing easier, including enhanced features such as a favorites button and an improved search function. The result in the third quarter was a better engaged audience, with a 56% increase to 69 million active buyers, and growth coming from nonmask buyers. Buyers are loyal, and 75% of gross merchandise sales (GMS) in Q3 came from buyers who were hooked before the pandemic.

Investors shouldn't underestimate how much of a boon the pandemic was for the company. The stock price was losing before the end of 2019, and in the 2020 first quarter ended March 31, which included the beginning of lockdowns, sales increased 35% and GMS was up 33%.

But that tells us a lot about how things might shake out after COVID-19 mostly fades away. Etsy's growth was pretty impressive when it was still the territory of makers and people who appreciated something different. Will the newfound popularity and skyrocketing sales remain? The platform has millions of new fans and buyers, and even slowed growth should remain impressive for a long time.

The workplace of the future

Fiverr is one of several digital freelance platforms, but it has a differentiated model of members that sells "gigs,"  kind of prefab freelance projects that are sold to clients for a specific fee. The company says that it has the "world's largest freelancer network and most comprehensive digital
service catalog."

Fiverr is another company that benefited from the pandemic as companies had to shift into work-from-home status and began to rely more on digital resources. 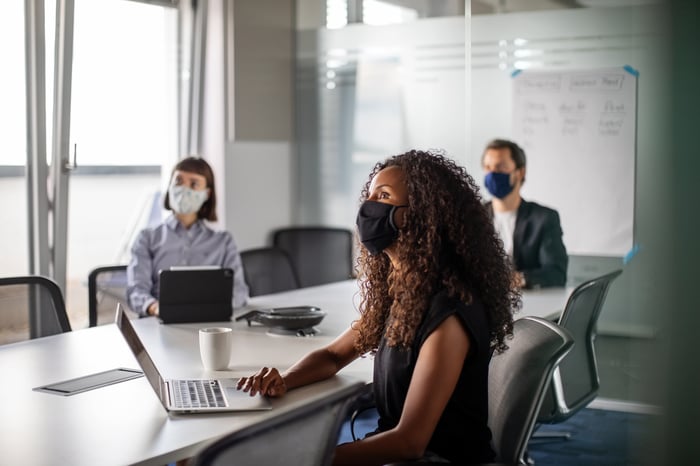 Fourth-quarter results were released on Thursday, and the company posted a standout quarter with 89% revenue growth. Active buyers increased 45% for the period ending Dec. 31, and the company began to operate in 30 new categories. Spend per buyer increased 20%, from $170 to $205, an important indication of customer satisfaction and organic growth.

It expects more high growth in 2021 and gave guidance of 85% to 90% revenue growth for Q1 and 46% to 50% for the year. During the first quarter, the company released its first Super Bowl commercial, which it estimates was viewed by 100 million people, but will add $8 million to first-quarter expenses.

The company still doesn't earn a profit, but gross margin increased. Revenue is still only $56 million, and the company is enjoying and expecting further tailwinds that are boosting its business, which should eventually lead to a positive income.

Fiverr stock gained a massive 730% in 2020, but it has continuing momentum and should keep rewarding investors.

Will the Etsy Strike Controversy Impact the Stock?

2 Years Into the Pandemic, Here's How Etsy Has Done

3 Struggling Stocks to Buy at a Discount