Please ensure Javascript is enabled for purposes of website accessibility
Log In Help Join The Motley Fool
Free Article Join Over 1 Million Premium Members And Get More In-Depth Stock Guidance and Research
By Harsh Chauhan - Feb 25, 2021 at 8:00AM

Fortinet (FTNT 2.43%) was trading at an attractive valuation in November 2020 after a broad market crash helped lower the stock price, and investors who took advantage of that opportunity are sitting on some fat gains right now.

But those who missed Fortinet's terrific rally over the past three months need not worry, as the cybersecurity specialist looks capable of delivering additional upside. Here's why. 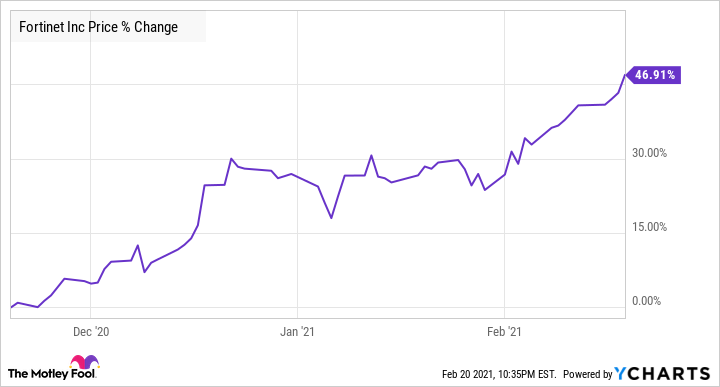 Fortinet calls for impressive growth in 2021

Fortinet is coming off a strong year. The company's revenue jumped 20% in 2020 to $2.59 billion, while adjusted earnings shot up to $3.35 per share from $2.50 per share in 2019. What's interesting to note here is that Fortinet's growth kicked into a higher gear in the fourth quarter of the year, with revenue increasing 21% over the year-ago period. This was better than the 19% year-over-year revenue growth the company had clocked in the third quarter.

Fortinet's 2021 guidance suggests that it can clock similar levels of growth this year. The company has guided for revenue between $3.025 billion and $3.075 billion, the midpoint of which indicates 18% growth over 2020. Adjusted net income is expected to fall between $3.60 and $3.75 per share. Wall Street was expecting Fortinet to earn $3.64 per share this year on revenue of $2.97 billion. The company has set the bar higher, but don't be surprised to see it exceed expectations as it can keep improving in some critical areas.

The margins should keep climbing

Fortinet has been known to lowball its guidance and deliver better-than-expected numbers. A similar trend can be expected in the forthcoming quarters as its service revenue is growing at a nice clip. Fortinet's service revenue increased 22.1% in 2020 to $1.68 billion, up from the 21.6% jump it recorded in 2019.

In comparison, Fortinet's product revenue grew at a slower pace of 16.2% in 2020 to $916.4 million, down from the 16.9% growth it recorded the previous year. The service business produced nearly 65% of Fortinet's total revenue last year, up slightly from 63.5% in 2019. The higher contribution from the services business boosted Fortinet's margin profile.

For instance, security subscriptions accounted for a third of Fortinet's top line last quarter, with revenue from this segment increasing 21% year over year. This business has the potential to keep growing at such rates in the future, going by the pace at which the company's deferred revenue is increasing.

Fortinet reported $2.61 billion in deferred revenue last quarter, up 23.7% over the prior-year period. This outpaced the company's actual quarterly revenue growth of 21%. The faster rate of deferred revenue growth indicates that Fortinet's subscription business is benefiting from longer contract lengths and increased purchases by customers.

Fortinet's average contract length increased to 28 months in the fourth quarter of 2020, up by almost two months over the year-ago quarter. Additionally, the company scored 68 deals valued at over $1 million each last quarter, up from 64 in the prior-year period. There was also an increase in the number of transactions valued at more than $500,000 and at more than $250,000, which points toward higher customer spend.

More importantly, Fortinet managed to push these metrics north despite spending 35.3% of its revenue on sales and marketing, down from 37.4% in the year-ago period.

Is the stock still worth buying?

Fortinet's recent rally has made the stock expensive compared to where it was in November 2020. It now trades at 56.6 times trailing earnings. However, the forward earnings multiple of 44 points toward higher earnings. Investors also shouldn't forget that Fortinet's current trailing price-to-earnings (P/E) ratio is nearly equal to the company's average 2020 multiple of 55.4. The current price-to-sales ratio of 10.6 is also identical to the 2020 average of 10.3.

Given that Fortinet is on track to further improve its financial performance in 2021, investors can still buy this growth stock, as it hasn't become much more expensive compared to last year.