Check your investment goals and risk tolerance to find the answer.

The Dow Jones Industrial Average (DJIA) dates back to 1896, when horses powered local transportation and Barnum and Bailey were the big names in entertainment. More than a century later, the index still represents the market's largest and most financially sound companies -- the so-called blue-chips. The DJIA, along with the broader S&P 500 index, also functions as a gauge for the health of the entire stock market and, to some extent, the U.S. economy.

As the U.S. looks to emerge from the COVID-19 pandemic later this year, you might wonder if now is a good time to invest in the blue-chip index. It's a fair question, but you might have to ask something different to get the right answer. 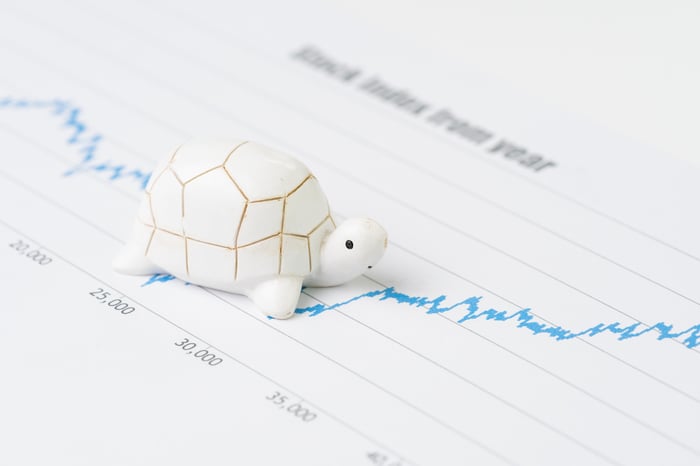 For the defensive investor

Instead of focusing on the outlook for the DJIA or the economy, consider whether your investment goals and risk tolerance align with the DJIA's behavior. That behavior is shaped by 30 of the country's largest public companies -- mature behemoths that tend to show slow and steady growth. If small-cap companies are speedboats that can top 100 miles per hour (at the risk of losing control and spinning out), DJIA constituents are aircraft carriers. They're sturdy and reliable, but not terribly exciting.

That's not to say the DJIA doesn't show volatility. In the coronavirus-induced crash of 2020, the index fell more than 30% from its pre-crisis high and didn't fully recover until November. A longer-term view, however, shows that the blue-chip index can be more resilient than the S&P 500 in down markets.

That's one reason why DJIA stocks are usually more popular at the beginning of an economic crisis versus the end. But even so, you can feel comfortable that the DJIA will continue to rise over the long term. These are high-quality, economically relevant stocks. If they falter, either in performance or relevance, they are cut from the index. As an example, the DJIA dropped Woolworth's in the late 1990s and added Walmart. More recently, the index removed ExxonMobil, Pfizer, and Raytheon in favor of Salesforce, Amgen, and Honeywell.

The slow and steady nature of these blue-chips is appealing when your investment goals involve culling risk from your equity holdings or protecting your capital. It's not appealing if your goals include quick wealth or market-beating returns.

Two ways to invest in the DJIA

You can invest in the DJIA by buying shares of index constituents directly, or by purchasing shares of a DJIA index fund. Since there are only 30 companies in the index, you could manage that portfolio as individual stocks. You would have to monitor your holdings and any index changes, of course. But you'd sidestep fund expenses and have greater freedom to make your own adjustments.

Had you owned all of the DJIA in 2016 or 2017, for example, you might have sold off your position in General Electric well before the energy conglomerate was kicked out of the index. GE's share price, which traded around $30 in late 2016, fell to $13 ahead of its removal from the DJIA in 2018.

Still, you may prefer the time efficiency of an index fund. You have two main options, SPDR Dow Jones Industrial Average ETF (DIA -0.01%) and Rydex Dow Jones Industrial Average Fund. To compare index funds, you generally want to look for a low expense ratio and low tracking error, which is the difference in performance between the fund and the index itself. Usually, the fund's operating expenses account for most of the tracking error.

Investing in the DJIA is a safe haven from downside risk. You won't be immune to short-term fluctuations in value, but the index constituents are generally capable of powering through negative market and economic conditions. If you can hold them for the long term, these blue-chips should reward you with moderate growth over time.

How Can I Invest for $1,000 in Monthly Retirement Dividends?

What the Dow Does in 2017 Just Doesn't Matter. Here's Why.
Take Tax Losses Without Missing the Next Rally
How to Pick the Right Obamacare Policy