The stock market performed well in 2016, and the Dow Jones Industrials (DJINDICES:^DJI) and S&P 500 (SNPINDEX:^GSPC) finished the year near all-time highs. It's natural to look at the new year as a time to evaluate your investments' performance, and with the bull market in stocks heading into its ninth year, some investors are worried about what the stock market will do in 2017. However, most investors shouldn't dwell on what the coming year may bring for stocks.

Here are three key reasons you shouldn't care about what the Dow does this year. 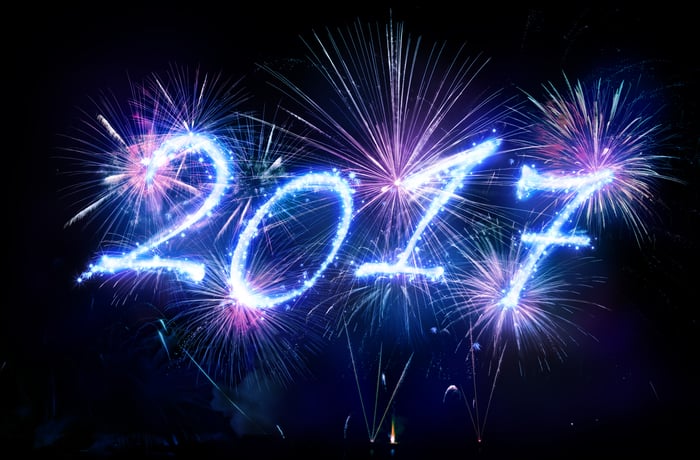 1. Most people have a much longer time horizon than a single year

For long-term investors, what happens in a single year plays a minor role in their overall investing success. As an example, take someone who invested in the Dow Jones Industrials 10 years ago, at the beginning of 2007. In hindsight, that might have seemed like a terrible time to invest, because you would have put your money to work just before the 2008 financial crisis that sent stocks reeling.

However, over that period, the Dow has climbed from around 12,400 to its current level of just below 20,000. That's a roughly 5% average annual increase, and that doesn't even include the dividends that the Dow's component stocks have paid along the way. The Dow's total return has been closer to 7.5% annually over the past decade. When you consider that the period includes one of the worst one-year declines in history, it's reassuring to see how gains in some years can more than offset losses in other years to produce impressive growth.

Some will argue that they don't have the time to wait out a bear market. If your time horizon is short enough that a single year could make a major difference in whether you reach your financial goals, then you shouldn't be heavily invested in the stock market.

2. For many, a falling market is as good as (or better than!) a rising market

If you're still in the phase of your life where you're accumulating savings, then you should actually prefer to see stocks go down, rather than up. That might sound counterintuitive, but the idea is that the cheaper an investment gets, the more shares you'll be able to buy with the money you save toward long-term financial goals like retirement. For instance, if you're saving $1,000 a month and investing in the SPDR Dow Jones Industrial ETF (NYSEMKT:DIA), then at current prices, you'd be able to buy about five shares of the ETF. However, if the market corrects by 10%, then you'll be able to buy about 5.5 shares. That extra half-share will boost your eventual total nest egg slightly, giving you a reward for your patience.

Again, it's important that you don't expect to sell in the near future. As long as you have enough time to ride out turbulence and enjoy a subsequent recovery, then volatility simply creates opportunity.

Finally, one thing that's important to keep in mind is that most people's portfolios won't end up having the same performance as major market benchmarks like the Dow. As a result, even if the Dow were to perform well, there's no guarantee that your portfolio would, too. Conversely, poor performance for the Dow won't automatically mean that your stocks won't shine.

This is particularly true for those who have diversified portfolios that include not only stocks, but also other investments like bonds and real estate, as well as cash. For example, in 2016, many all-purpose bond funds were essentially flat, so those who had a 50/50 portfolio in stocks and bonds essentially earned just half the return of the stock market. Yet that's no reason to feel like a failure, because the intent of such a portfolio is to reduce risk and stabilize returns. That will work especially well in a down market for stocks, as other assets often provide ballast and mitigate any portfolio loss.

Many people will worry about what the Dow does in 2017, but it's not worth fretting over. For these and other reasons, you'll be better served spending your time looking for the best investments on the market and letting the Dow take care of itself.

What the Dow Does in 2017 Just Doesn't Matter. Here's Why. @themotleyfool #stocks $DIA $^DJI $^GSPC Next Article
Current