Please ensure Javascript is enabled for purposes of website accessibility
Log In Help Join The Motley Fool
Free Article Join Over 1 Million Premium Members And Get More In-Depth Stock Guidance and Research
By Will Healy - Mar 2, 2021 at 9:07AM

Why high levels of interest may not lead to investor gains.

GameStop (GME -1.22%) has become one of the biggest investment surprises of early 2021. With the stock having climbed as much as 25-fold in January, it has drawn the attention of numerous investors. However, this interest has also brought unprecedented volatility and massive price swings. Given the company's business, its financials, and the speculative nature of the retail stock, investors should think twice about opening a position.

GameStop built a nationwide footprint by becoming a place to buy the latest video game releases. It also made itself a hub where people could buy, sell, and trade games, consoles, and accessories, and find other merchandise. That model made it a successful company until game makers began to sell their games via online downloads. With that change, GameStop lost much of its reason for being, sending the company's fortune and its stock plunging.

These struggles have also affected GameStop's top management. In February alone, the company appointed a new chief technology officer, and the chief financial officer announced that he would resign in March. 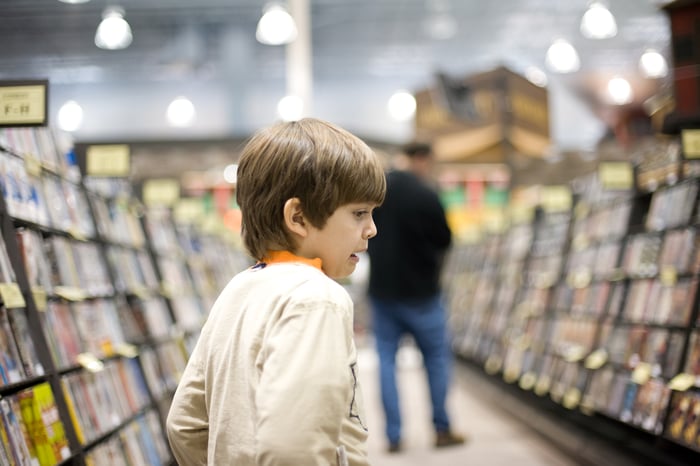 Amid this turmoil, GameStop has moved much of its operations online and taken an omnichannel approach. The company closed over 800 stores between the beginning of 2019 and the first nine months of 2020, quite a change for a company with over 5,000 locations. It also expanded product and category extensions such as comics and other types of collectibles to increase the size of its addressable market. On the video gaming side of the business, this included a "digital-first" approach for game downloads. The company also increased fulfillment options to deliver the most comprehensive set of game options delivered in the fastest way possible.

However, while these moves may help the company to survive, they also leave GameStop with a narrow competitive moat. Physical games and other items to sell or trade gave gamers a reason to visit stores. Now, game downloads leave little room for differentiation or trades. Also, it remains unclear whether customers will turn to GameStop for its new product categories.

Moreover, even with its new strategy, the company's financials still reflect the extent of GameStop's struggles. Yes, in the most recent earnings report, online sales rose by 257% year over year in the third quarter. E-commerce also experienced a 352% increase in November from year-ago levels. In the Q3 2020 earnings call, management attributed the gains to their shift in strategy, adding that COVID-19 lowered comparable sales by three to five percentage points.

Nonetheless, in the first nine months of 2020, overall net sales fell by nearly 31% over the last 12 months to just under $3 billion. While the company's loss of $296 million improved from the $492 million loss in the first nine months of 2019, the 27% and 22% reductions in the cost of sales and sales, general, and administrative expenses respectively fell short of the sales reduction.

In the first nine months of 2020, the company only suffered modest goodwill and asset impairments. Accounting rules require the adjustment of some existing assets to their fair value. While it can bring a tax write-off, it also reduces overall income. GameStop reported $5 million in impairments versus more than $375 million in the first nine months of 2019. This is how GameStop narrowed its losses.

Nonetheless, this shows that GameStop cannot cut its way to a comeback. Hence, net sales will probably have to turnaround before free cash flow turns positive.

Another factor hurting long-term investors in GameStop pertains to trading momentum that has separated GameStop stock from these fundamentals. This began when a group of investors on Reddit's r/wallstreetbets site noticed large bets against GameStop stocks by hedge funds in anticipation of the company's failure. Seeing a potential opportunity, some investors began to buy.

This led to a run-up in the stock to record levels. That surge took GameStop from about $19 per share at the beginning of the year to a peak of $483 per share by January 28. It then fell to a low of $40 per share by February 23. Recently, GameStop stock just exploded higher as another surge past $100 per share begins. 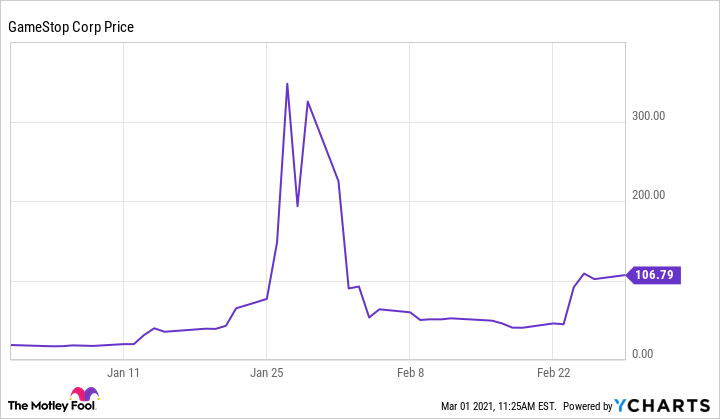 Unfortunately, this picture would likely change should speculators lose interest in GameStop. At that point, stockholders would own a declining retailer struggling to redefine itself through omnichannel sales. Investors tend to buy stocks because they expect higher returns, not merely because a company finds a way to survive. For this reason, an end to the speculation will probably not bode well for GameStop stock.

Where GameStop goes from here

GameStop remains a retailer in decline. Nonetheless, the encouraging growth rates in online sales offer hope for its survival. It has also benefited from speculative interest as average investors battle hedge funds.

However, speculation rarely lasts for long periods. Hence, long-term GameStop investors need to make decisions based on fundamentals, which now point to possible survival rather than likely prosperity. Unless the company can find a way to move beyond treading water, any position in GameStop looks more like a bet than an investment.