Please ensure Javascript is enabled for purposes of website accessibility
Log In Help Join The Motley Fool
Free Article Join Over 1 Million Premium Members And Get More In-Depth Stock Guidance and Research
By Jim Halley - Mar 4, 2021 at 6:26AM

The past 12 months have been a wild ride for the genetic testing company's stock, with a sub-$10 low and a high of more than $60.

Invitae offers diagnostic and predictive genetic testing to help patients, healthcare providers, biopharma companies, and other groups diagnose specific conditions or determine someone's risk of developing certain diseases. The genetic testing market is set to be worth more than $21 billion by 2027, growing at a compound annual growth rate of 10% until then, according to a Research and Markets report. But does Invitae's current price offer a nice purchasing opportunity to get in on the industry's growth, or is its recent dive a sign of things to come? How Invitae views its own niche

The company's shares have risen almost 100% over the past year, though they've fallen more than 25% in the past month. While it hasn't turned a profit since its founding in 2013, investors like Invitae's top-line growth. It reported $279.6 million in revenue in 2020, a 29% rise year over year. It also increased testing volume by 41% in the year to 659,000 billable units. That's despite the headwinds caused by the coronavirus pandemic earlier in the year, when genetic tests took a back seat to COVID-19 diagnostic and medical concerns.

The company sees its future in making high-quality genetic tests affordable and plentiful, increasing its business through volume.

The company's biggest move last year was its purchase in October of ArcherDX, another genetic testing company that specialized in oncology, including personalized cancer monitoring and liquid and tissue biopsy analysis, for $1.4 billion in cash and stock. To complete the deal, Invitae borrowed $135 million.

While some of Invitae's tests are covered by insurance carriers, the company said that for those whose insurance doesn't cover the costs, the tests can be as low as $99 for noninvasive prenatal screening and $250 for diagnostic, carrier, or proactive testing.

There's already a lot of competition in genetic testing from bigger companies, such as Abbott Labs, Roche, Quest Diagnostics, and Illumina. Invitae, with a market cap of $9.6 billion, is one of the smaller players. Analysts seem excited about the company's prospects, though. It's one of the top 10 holdings in Cathie Wood's ARK Invest Innovation ETF, for example, grouped in with companies such as Tesla, Square, Roku, Teladoc Health, Shopify, and CRISPR Therapeutics.

The company reported a net loss of $608.9 million, a rise of 149% over 2019. In its annual report, Invitae said that while it expects its revenue to expand, it may be a while before it turns a profit as it concentrates first on growing the business.

The company's debt-to-equity ratio is 0.51, which is not really a big cause for alarm, but Invitae has grown its total net long-term debt 562% in the past three years. 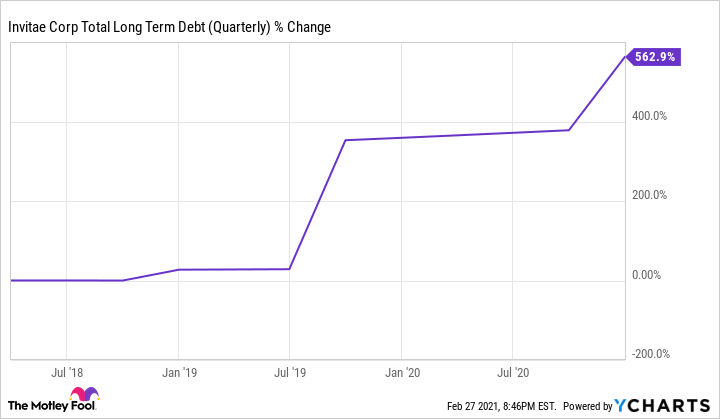 Of greater concern is the company's cash position of $360.7 million on Dec. 31, down from $398 million on Sept. 30, according to the company's fourth-quarter earnings call. While management has been able to raise cash by offering the sale of stock, that, of course, dilutes current shareholder value. Going that route also becomes difficult if the stock's price falls.

The company burned through $441.1 million in cash in the fourth quarter alone, though $352.7 million of that was attributed to the acquisition of ArcherDX. Without acquisitions, the company said it would have gone through $74.8 million in the quarter, including Archer's own cash burn.

Invitae's beta over the past five years is 2.038, meaning it is almost 104% more volatile than the S&P 500. There are good reasons for that. For one thing, it's a relatively new company in an emerging market where there are a lot of unknowns and a lot of potential competition. Looking at the company's ups and downs over the past year, they make sense. The company's stock tanked in April, not long after the rest of the market dropped when the coronavirus pandemic shutdowns began. Shortly after that, Invitae issued more shares. Since then, the company's shares have steadily risen, cresting in mid-December after the company reported three studies that showed the benefits of genetic testing for early detection of breast cancer.

With its three-year revenue gain of 226.8%, I think it's safe to say that Invitae is a classic growth stock.

There are some red flags, particularly the company's cash position, but I like its long-term prospects considering its revenue growth and the increasing prevalence of genetic testing in general. People are willing to spend $100 to find out their ancestry, which in many cases is something they already know. Why wouldn't people be willing to part with a little more than $100 to see if they need to take special precautions to guard against diabetes or heart disease?

Cautious investors may want to wait until they see Invitae's path toward profitability, but at its current price, this is an opportunity to buy on the dip before the company's shares rise again, especially as more people return to their regular doctors and create the opportunity and need for more genetic tests.