Please ensure Javascript is enabled for purposes of website accessibility
Log In Help Join The Motley Fool
Free Article Join Over 1 Million Premium Members And Get More In-Depth Stock Guidance and Research
By Nicholas Rossolillo - Mar 4, 2021 at 9:15AM

After its recent 20% price pullback, this is a great long-term value on a highly profitable company.

Share prices for Universal Display (OLED 0.43%) pulled back over 20% from all-time highs after the company released its final quarterly update for 2020. A breather in many high-growth tech stocks may have been the primary reason, but UDC's stock was getting ahead of itself in the months leading up to the Q4 report. However, after hitting it out of the park in the last quarter, and with plenty of growth levers at its disposal in the next few years, this is starting to look like a long-term value again.

Ending a forgettable year on a high note

UDC fared poorly during the onset of the pandemic last spring. Revenue was cut in half year over year during Q2. However, it would have been a good buy at that time -- the company's sales have since rallied and then some, notching a 39% year-over-year advance in Q4 to $141.5 million. And as UDC has continued to reach a more profitable scale the increase in net income has been even more dramatic, jumping 104% during the final months of 2020 to $53.9 million.

All told, 2020 went from disaster to a pretty good outing for the OLED screen patent holder and basic materials seller.

Though it was a wild year, seasoned UDC shareholders know that the company's financials will ebb and flow with the activity of its manufacturing partners (manufacturing itself is a highly cyclical business). In spite of that volatility, the rosy longer-term story remains intact: OLED is still slowly but steadily displacing LED as the gold standard in screen technology, and Universal Display is the best way to invest in the movement. Management reiterated that it sees global manufacturing capacity up 50% by the end of 2021 compared to where it was at the end of 2019. Though the manufacturing capacity of its partners doesn't equate to revenue growth for UDC, it does bode well for more basic material sales (historically roughly two-thirds of revenue) and more royalty and tech licensing (the other third) over time. 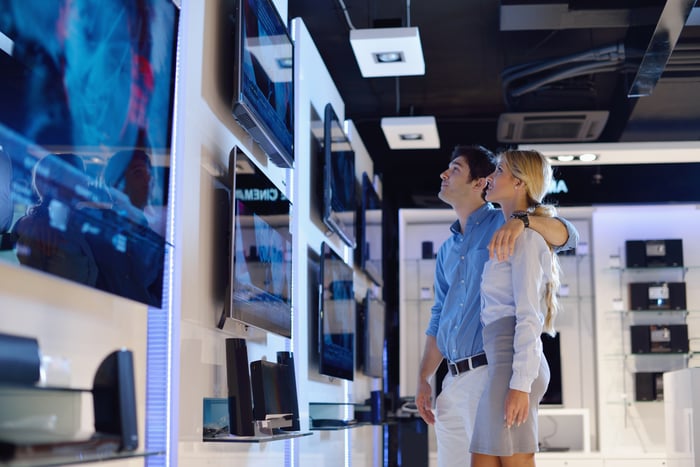 At the moment, UDC is getting a lift as more smartphones and high-end TVs adopt OLED displays. But there's more going for the company long-term. Blue phosphorescent emitters are still being developed, which would provide a big boost to UDC's material sales (when those arrive). And a new manufacturing system for OLED screens (called OVJP, or organic vapor jet printing) will also start selling next year, which could help reduce the cost of manufacture and increase consumer adoption of OLED. Besides a new royalty and licensing revenue stream, promoting more OLED device sales means UDC gets to sell more basic materials -- making it a great picks-and-shovels play on next-gen displays.

And if the past is indicative of where UDC goes next, all of those new developments mean plenty of bottom-line increases. Universal Display is a highly profitable firm, even in a lean year like 2020. Free cash flow profit margin was a very healthy 28% last year and over 40% in 2019. As a result, UDC has built up an impressive $730 million in cash and short-term equivalents, and it has zero debt. The dividend yield on the stock is just 0.4% a year, but the quarterly payout was just hiked from $0.15 to $0.20. There's plenty more dividend income in the decade ahead.

As of this writing, Universal Display has a market cap of $10.3 billion and shares trade for 85 times trailing 12-month free cash flow. However, this highly profitable firm is still growing fast and is poised for a big rally this year as it laps the initial effects of the pandemic. It may carry a premium price tag, but this is in all actuality a great long-term value on the future of electronic displays.