Please ensure Javascript is enabled for purposes of website accessibility
Log In Help Join The Motley Fool
Free Article Join Over 1 Million Premium Members And Get More In-Depth Stock Guidance and Research
By Taylor Carmichael - Mar 6, 2021 at 6:18AM

A rocket company, a 3-D capture software company, and two biotechs are about to hit the public markets. Smart investors can get in now via special purpose acquisition companies.

What's nice about being early in picking a future winner is that you don't have to put up a large amount of money to eventually make a fortune. A $1,000 investment made when a company is a small cap can produce tremendous returns over the next 20 years. And because of the revolution in special purpose acquisition companies (SPACs), we're seeing a wave of opportunities that fit that exact bill, right now.

Here are four SPACs that I really like: HighCape Capital Acquisition (CAPA), Holicity (HOL), Gores Holdings VI (GHVI), and VG Acquisition (VGAC). All four of these SPACs are no longer "blank check" companies -- they have deals in place to merge with some outstanding private companies. Here's why I'm excited about each of these names. 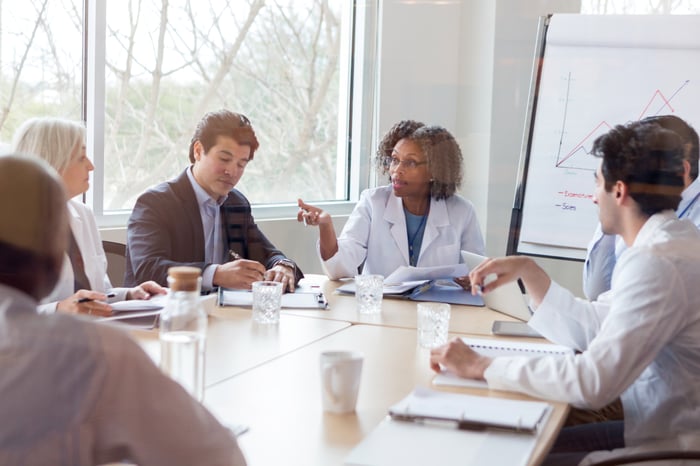 Quantum-Si has developed a chip that serves as a foundation of a sequencing platform for proteins. "DNA sequencing changed medicine and research by revealing what could happen in the body; protein sequencing shows what is happening right now," said Dr. Jonathan Rothberg, the founder of Quantum-Si. The demand for a map of proteins is huge, as 90% of drugs target one or more proteins. So while sequencing human DNA is a major business -- Illumina is one genetic sequencing company with a valuation close to $65 billion -- arguably, the sequencing of human proteins will be an even larger market opportunity.

Under the deal stuck with HighCape, the private company was valued at $1.4 billion with shares priced at $10 a pop. Since the deal was announced, HighCape's stock has run up to $14, so it has roughly a $2 billion market cap right now. And the company raised a cool $500 million from the transaction, without taking on any debt.

Competitors include SomaLogic and Nautilus Biotechnology, both of which are private businesses. But while SomaLogic and Nautilus are identifying and quantifying proteins, Quantum is the only one that is now sequencing proteins. It's a vast market opportunity, and Quantum-Si will be a first mover in the space. Right now the company is in the pre-revenue stage; the commercial launch of the first protein sequencing device is scheduled for 2022.

In 2019, Virgin Galactic went public via a SPAC. This space stock has been a huge winner for early investors, quintupling in a little over a year. While the space tourism company was the first prominent space stock to hit the public markets, it won't be the last. Astra is going public via Holicity this year, and I'm more excited about Astra's business model than I am about space tourism, or even high-speed business travel.

Astra shoots satellites into space. The company has a relatively low-cost model, with launches currently costing about $3 million. It wants to reduce that to $1 million, and it plans to have daily satellite launches by 2025.

While Elon Musk's SpaceX is technically a competitor, the two companies are on opposite sides of the space spectrum. SpaceX is shooting massive rockets into space. The Falcon 9 will carry about 25 tons of satellites into space on one launch, at a cost of $62 million (each satellite is about as big as a car). Astra's payloads are much smaller. Its satellites are about the size of basketballs.

Astra has over $150 million in contracted revenue, and says it has $1.2 billion in the pipeline. Management estimates the market opportunity over the next decade at $100 billion. Early venture capitalists investing in Astra include Marc Benioff, the founder of salesforce.com, and Eric Schmidt, a former executive at Alphabet.

3D-capture specialist Matterport is going public in the second quarter. The company said in a January investor presentation that it is "fueling the digital transformation of the built world." This software space represents a $240 billion market opportunity -- so investors are paying attention.

With Matterport's technology, you can capture images of your space with an iPhone and turn those images into digitized renderings. Once your physical space is online, you can design, build, manage, and promote your real estate over the internet.

Matterport is a first mover in spatial data, and already has $100 million in run-rate revenue, with 10 billion square feet captured using its technology. The company is growing like mad. In 2020, it had 250 corporate subscribers to its software platform, up from 40 in 2019. Its revenue is growing by 87% on an annual basis, and its gross profit margin is up to 73%.

To house your data, Matterport charges $1 per space per month for the basic package. Even at that small price, the upside is amazing. If the company captures even 1% of the real estate market, it could bring in $2.4 billion in annual revenue. And the company is planning additional services that might increase the charge to $5 per space every month.

23andMe has the largest genetic database in the world: Over 10 million people have trusted the company with their genetic data. That dwarfs the 1 million people at Regeneron or the million-veteran program being run at Personalis. Right now, the company is providing an ancestry-tracing service. But its target market is personalized health.

23andMe can tell you if you are susceptible to diabetes or chronic kidney disease, or whether you have the carrier gene for cystic fibrosis or sickle cell anemia. And the database is a trove of patient data. 23andMe has a collaboration agreement with GlaxoSmithKline (GSK 2.20%) to find targets for drug research. The two companies have over 30 research programs in place in the areas of oncology, immunology, cardiovascular disease, neurobiology, and metabolic disease. GlaxoSmithKline has already made a $300 million stock investment in 23andMe.

The duo is very early in the drug discovery process, and has only one drug in phase 1 trials. I'm not investing here yet, but I'm definitely keeping 23andMe on my watch list. And while it might be early, I'm using the SPAC vehicles to make small investments in Astra, Quantum-Si, and Matterport. Astra is a fast-rising upstart in the space race, while Quantum-Si will be the first to sequence our proteins, and Matterport has created a new market of digitizing real estate. I'm hopeful that one or more of these small caps will become a dominant stock over the next decade.