Please ensure Javascript is enabled for purposes of website accessibility
Log In Help Join The Motley Fool
Free Article Join Over 1 Million Premium Members And Get More In-Depth Stock Guidance and Research
By Will Healy - Mar 10, 2021 at 9:07AM

Which 5G provider will give stronger signals to investors?

Verizon Communications (VZ 0.80%) and T-Mobile (TMUS 1.03%) exercise tremendous market power. Along with AT&T, these telecom stocks form a 5G oligopoly bolstered by high fixed costs and the fastest wireless speeds. Over time, T-Mobile has delivered higher investor returns on lower pricing for its service. Now, as 5G coverage expands, investors will have to determine whether Verizon's network quality and first-mover status will bring higher returns than T-Mobile's.

Despite slower stock growth in recent years, Verizon retains competitive advantages. It started as the company offering the "largest, most reliable" network in the 4G realm. Verizon also won the race for the fastest 5G network launch, bringing service to parts of Chicago and Minneapolis in April 2019.

Now it offers 5G to more than 200 million customers in over 1,800 cities. Additionally, it has launched its fastest 5G, 5G Ultra Wideband, in 55 cities, offering speeds as fast as 4 gigabytes per second (Gbps). 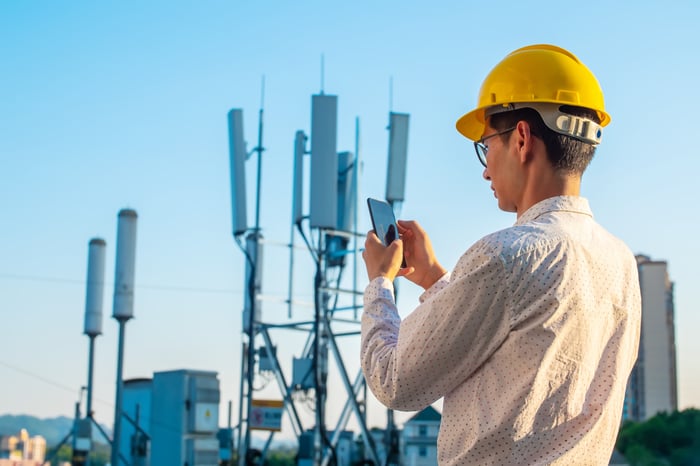 This has helped Verizon become a cash cow. In 2020, the company spent $18.2 billion on capital expenditures, yet still generated free cash flow of $23.6 billion. That left Verizon more than enough cash to cover its 2020 dividend costs of $10.2 billion. Moreover, Verizon hiked the dividend for the 14th consecutive year in 2020. Given that its payout consumes less than half of its free cash flow, the company can probably afford further dividend increases. At $2.51 per share annually, the dividend yields approximately 4.4%. Additionally, the P/E ratio of 13 comes in lower than AT&T's 19 multiple, making this cash flow stream appear cheap.

However, Verizon's low revenue growth has likely held down the earnings multiple. Competition from T-Mobile and AT&T has long kept both net additions and revenues in check. 2020 operating revenues fell by 3% from year-ago levels to $128.3 billion. GAAP earnings also fell by almost 8% over the same period to $4.30 per share.

Moreover, network costs have contributed to the total debt load rising to about $129 billion. This represents quite an expense for a company worth only $69.3 billion in stockholders' equity -- the amount left after subtracting liabilities from assets -- taking the debt-to-equity ratio to just under 1.9.

Additionally, during 2020, debt grew by more than $17 billion, while equity increased by around $6.4 billion. Although this made the debt an increasing burden, it also helped boost the company's cash position by almost $20 billion, which has given Verizon liquidity during the pandemic. The company's cash flows allow it to pay the $4.2 billion in annual interest needed to service the debt, which should lessen concerns about these obligations.

Nonetheless, this debt weighs on Verizon stock, which experienced no net gains over the last year. During the same period, the S&P 500 rose by 31%. In the previous 10 years, Verizon's stock increased by 58% compared with 192% for the S&P. 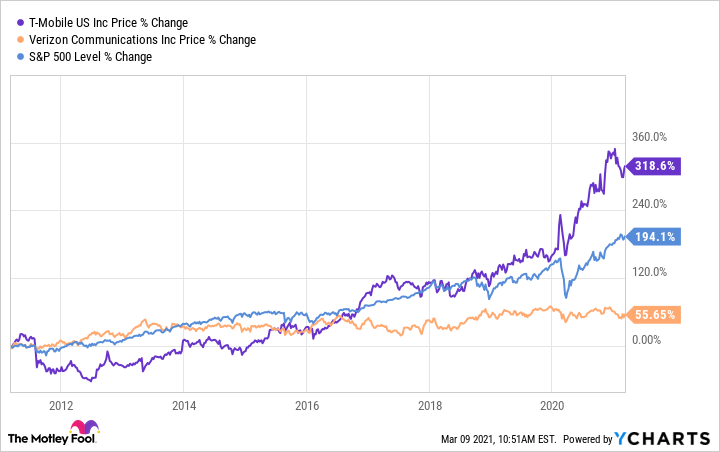 As an exclusively wireless company, T-Mobile may appear better-suited to provide 5G. It has acquired more licensed spectrum through its purchase of Sprint, and T-Mobile emerged the big winner in a recent spectrum auction. Owning licensed spectrum gives a company exclusive control of a frequency over a defined geographic area, offering a provider the ability to improve service. Through this, T-Mobile can better compete on quality.

T-Mobile initially attracted customers through lower pricing, and stockholders responded favorably. They bid its stock price higher by more than 45% this year and by about 320% over the last 10 years. This means that despite not offering a dividend, T-Mobile has delivered higher shareholder returns than Verizon. This has taken the P/E ratio to 45, about 3.5 times Verizon's multiple.

Nonetheless, while T-Mobile's 2020 revenue of $68.4 billion lags Verizon, it increased by 52% year over year as it absorbed Sprint. Factors such as rising operating expenses, a 240% surge in interest expenses, and debt extinguishment expenses, all brought about by the Sprint merger, brought net income to just under $3.1 billion, a 12% drop from 2019 levels.

The company did not break down how much of its revenue growth came from absorbing Sprint. However, in comparison, 2019 revenue and net income for T-Mobile before the merger rose 4% and 20%, respectively, from 2018 levels.

Additionally, the merger dramatically increased total debt to about $73.6 billion, up from $27.3 billion in 2019. Still, with the company worth around $65.3 billion after subtracting liabilities from assets, the debt-to-equity ratio of about 1.1 burdens T-Mobile less than its peer.

Still, T-Mobile's financials have weighed on free cash flow, which came in at about $3 billion for 2020. This excludes gross payments for the settlement of interest rate swaps which the company used to help finance the Sprint merger. These payments came in at more than $2.3 billion, meaning T-Mobile would have generated only $658 million in free cash flow without the payments.

Also, operating activities generated only $8.6 billion in cash. If not for the $3.1 billion generated from deferred purchase prices, T-Mobile would have reported negative cash flow.

Despite the higher valuation and complicated cash flow picture, investors will likely see higher returns in T-Mobile. T-Mobile has long outcompeted Verizon on price. Now, with increasing amounts of spectrum, T-Mobile can improve on quality.

Moreover, even though T-Mobile reports much lower free cash flow, it has also dramatically increased its investment in property and equipment. Not all such investments generate returns. Nonetheless, with T-Mobile's history of consistently higher revenue and earnings growth than Verizon, it increases the likelihood that its increased capital spending will pay off for T-Mobile over time.