Please ensure Javascript is enabled for purposes of website accessibility
Log In Help Join The Motley Fool
Free Article Join Over 1 Million Premium Members And Get More In-Depth Stock Guidance and Research
By Will Healy - Mar 11, 2021 at 7:44AM

Comparing the two pioneers of industry.

Investors comparing Netflix (NFLX 1.98%) and Amazon (AMZN 3.66%) may think first of the companies' rivalry in streaming video -- but these stocks' efforts to begin new industries probably serve as a more important commonality. Amazon stood out by spawning two different powerhouse business segments: e-commerce and cloud computing. While that advantage could make Amazon the better bet over the streaming video pioneer, investors should take a closer look at both to evaluate which stock holds more potential for higher returns.

Netflix has definitely benefited from its own strategic decision-making. It transitioned away from mail-in DVDs as soon as technology allowed for streaming. It also pivoted to proprietary content as competitors began to emerge. Today, Netflix leads the streaming market with almost 204 million subscribers as it dominates the Golden Globes. This subscriber count far outpaces its nearest competitor, Disney's Disney+, with around 95 million subscribers. 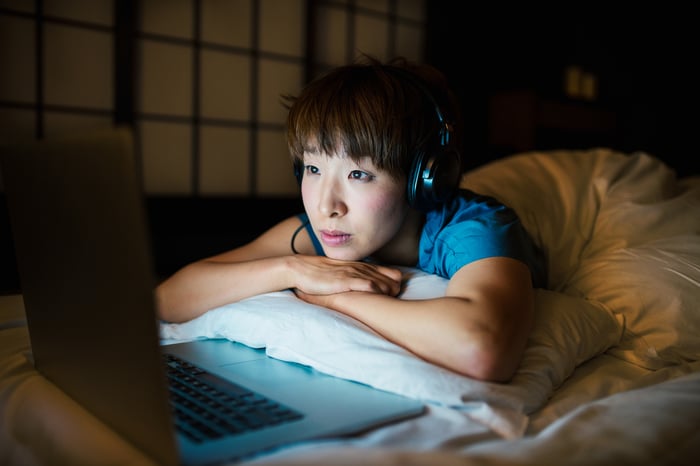 Amazon similarly leads in e-commerce, selling nearly $341 billion in goods in 2020. While that still lags Walmart's (WMT 1.97%) $555 billion in net sales, Walmart earns most revenue from in-store retailing. Also, Amazon has started a successful cloud computing business, AWS. It maintains a significant market lead over competitors, controlling about one-third of the market, according to ParkMyCloud. Additionally, AWS accounts for the majority of Amazon's profits.

As mentioned before, both operate streaming video platforms. Nonetheless, Amazon treats streaming as an added benefit for subscribing to its Prime service and does not release specific financial figures on Prime Video. Thus, for purposes of comparing stocks, investors should not view the two companies as "competitors."

Instead, investors should look more closely at what each company's financials reveal about its true strengths and weaknesses.

In fiscal 2020, Netflix's revenue increased by 24% year over year to nearly $25 billion. Its net income rose 48% to just under $2.8 billion over the same period. Income surged as slower growth in operating expenses more than offset Netflix's rising cost of interest and foreign exchange losses.

Nonetheless, investors should take Netflix's net income with a grain of salt. Debt moved higher as content spending steadily rose. BMO Capital Markets forecasted over $17 billion in content spending in 2020. The pandemic shut down production for much of the year, and Netflix did not confirm that figure or reveal how much it allocated to content in 2020.

Nonetheless, the company spent $15 billion in content development in 2019. This conflicts with the $12.4 billion reported in cost of revenue that year, meaning debt likely financed some development costs.

As a result, total debt has risen from under $3.4 billion in 2016 to over $16.3 billion in 2020. This far exceeds equity of just under $11.1 billion, the company's value after subtracting liabilities from assets, and leaves the debt-to-equity ratio at almost 1.5.

Knowing this discrepancy, investors should question how long Netflix can finance content development through debt. Eventually, the company may have to dilute shares or scale back development to maintain its financial stability.

This approach stands in stark contrast to Amazon's financial picture. Its net sales grew by 38% from year-ago levels to $386.1 billion, and net income rose by 84% to $11.1 billion. Income surged as operating expense growth lagged revenue increases, and, unlike in 2019, Amazon turned a non-operating profit in 2020.

Amazon's leadership in two industries also serves as an advantage. AWS accounted for $13.5 billion of Amazon's $22.9 billion in operating income in 2020. This allows AWS to subsidize competitive initiatives.

In 2019, net income grew modestly for retailing as the company switched from two-day to one-day shipping. As a result, overall shipping costs in 2019 rose by more than $10 billion, or 37% from year-ago levels, during a period when retail sales revenue increased by just over 18%, or $38 billion during that period. However, since AWS increased operating income by 26%, the company still grew net income by 15%.

Amazon also supports a more stable balance sheet. In 2020, long-term debt increased by more than $8 billion to $31.8 billion. Nonetheless, the $31 billion in annual free cash flow easily covered interest expenses of just over $1.6 billion. Also, since Amazon supports an equity value of $93.4 billion, its debt-to-equity ratio comes in at a more comfortable 0.3. This makes debt a less significant burden for Amazon than for Netflix.

That debt picture also helps Amazon come out a clear winner among these tech stocks. Netflix appears headed for a hard choice between financial stability and staying ahead in the content race. In contrast, the profit levels of AWS can insulate Amazon amid a highly competitive retail environment. This success in two different industries of its own creation makes Amazon difficult to challenge.