Please ensure Javascript is enabled for purposes of website accessibility
Log In Help Join The Motley Fool
Free Article Join Over 1 Million Premium Members And Get More In-Depth Stock Guidance and Research
By Adam Levine-Weinberg - Mar 12, 2021 at 7:19AM

The retail REIT is burning cash and struggling to sign up new tenants to fill the massive vacancies in its real estate portfolio.

Shares of troubled retail REIT Seritage Growth Properties (SRG -4.20%) have been on a tear in recent months. Investors have bet enthusiastically on reopening and recovery plays -- especially stocks with high short interest like Seritage.

However, a huge disconnect between Seritage's stock price -- which has tripled over the past 10 months, recovering a good chunk of its pandemic-related losses -- and its financial performance has developed. Indeed, Seritage released a dreadful fourth-quarter and full-year earnings report this week. 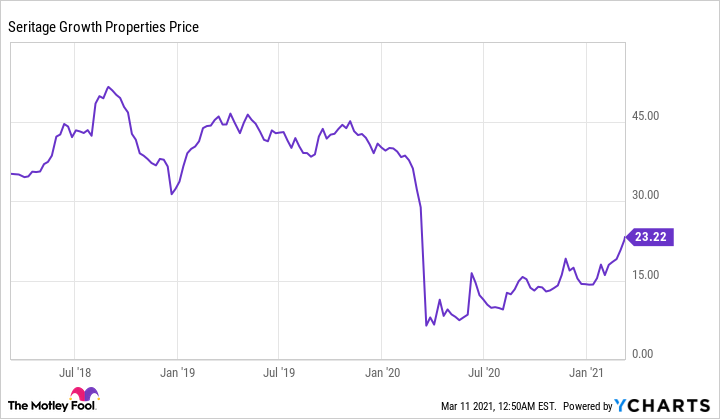 Seritage has been posting weak financial results for years, as the Sears spinoff struggled to redevelop properties as quickly as Sears and Kmart closed stores. That said, entering 2020, it seemed to be on the right track.

The COVID-19 pandemic thoroughly disrupted Seritage's business plan, though. Some tenants filed for bankruptcy and closed stores. Others backed out of new leases. Still others remained in business but haven't stayed current on their rent.

This caused Seritage's total NOI to fall 48% year over year to $37.8 million in 2020. In the fourth quarter, total NOI plunged 55% to $8.6 million. Making matters worse, the pandemic has undermined leasing activity. Seritage signed leases for just $8.1 million of annual base rent last year after averaging over $40 million of lease signings annually in recent years.

Due to this disruption, Seritage ended 2020 with just $54.5 million of SNO leases, down nearly $30 million year over year. Meanwhile, in-place rent fell from $107.7 million at the beginning of 2020 to $96.1 million at year-end. In short, Seritage is further than ever from achieving profitability and positive cash flow.

Seritage bulls like to highlight that the REIT owns lots of high-potential real estate -- which is true. However, redeveloping real estate is extremely expensive. Prior to the pandemic, Seritage was spending $100 million or more each quarter on capital expenditures. Yet it has a weak balance sheet, with $1.6 billion of debt and just $144 million of unrestricted cash as of Dec. 31, 2020. Seritage has no easy way to raise the money it would need to finance the slow and expensive task of redeveloping most or all of its high-potential real estate. Moreover, the REIT is currently burning at least $100 million annually before spending a dime on redevelopment. Annual interest expense, overhead costs, and carrying costs for vacant real estate far exceed Seritage's in-place rent of $96.1 million.

Selling non-core properties to fund redevelopment costs was always part of Seritage's strategy. However, it's now selling high-potential real estate to raise cash -- even as it has dialed back its redevelopment activity. That's a very troubling development (no pun intended!).

No turnaround in sight

Seritage has frozen most of its capital spending, with the exception of a handful of retail redevelopments that were nearing completion prior to the pandemic and a few large-scale projects. That will preserve cash in the short term, but it also means that Seritage isn't making much progress toward reducing its underlying cash burn.

Additionally, even if all of Seritage's SNO leases converted to rent-paying status tomorrow, it wouldn't get the REIT to cash breakeven. To reach breakeven -- let alone profitability -- Seritage must raise more capital on attractive terms, sign many more leases, and execute effectively on its redevelopment projects.

None of those tasks will be simple. Together, they add up to a tough uphill climb for Seritage Growth Properties over the next few years. Investors can probably find better places to put their money.