Seritage Growth Properties shareholders may be benefiting from a short squeeze now, but the REIT stock is likely to surrender its recent gains as the company continues to burn cash.

The COVID-19 pandemic crushed Seritage Growth Properties' (SRG 2.84%) business in 2020 -- as was the case for most owners of retail real estate. Shares of the real estate investment trust (REIT) fell from around $40 a year ago into single-digit territory last spring.

While Seritage shares briefly surpassed $20 last June, the REIT stock ended 2020 below the $15 mark. However, it surged again last week, closing at $22.37 on Thursday, as investors chased risky assets and bet on heavily shorted stocks like Seritage. 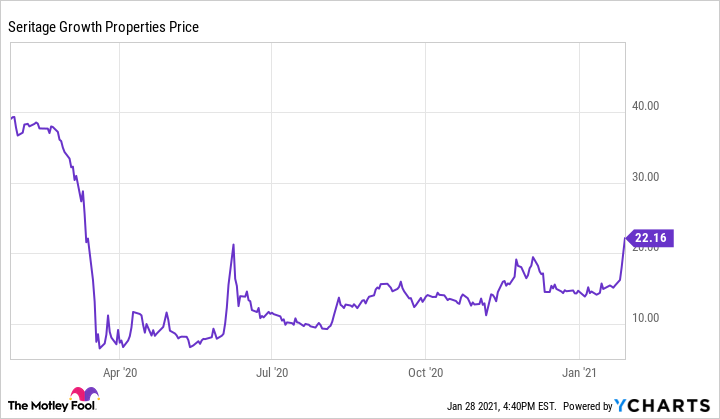 Seritage Growth Properties stock could certainly move higher in the near term if a short squeeze continues to develop. Nevertheless, investors should take advantage of the recent rally to get out of this troubled REIT stock.

Seritage was formed in 2015 to buy most of Sears Holdings' real estate. The REIT started with a compelling strategy. It leased most of its assets back to Sears Holdings but aimed to gradually redevelop them to increase their value. In most cases, that would involve replacing a Sears or Kmart store with higher-paying tenants. At some urban sites, Seritage aimed to build substantial mixed-use projects, including offices, apartments, and/or hotels.

This strategy worked well initially. However, by 2018, Sears was closing stores much faster than Seritage could line up new tenants. The loss of rental income decimated Seritage's cash flow. The pandemic made a bad situation much worse. Some of the REIT's replacement tenants have closed stores at its properties, failed to pay rent, or backed out of leases for new locations. (Indeed, entertainment, theater, gym, and restaurant tenants accounted for over 30% of Seritage's in-place rent as of early 2020.)

As a result, Seritage has been burning cash faster than ever. It has had to sell properties that it previously viewed as core assets to cover that cash burn (as well as its ongoing development expenses). Clearly, this situation isn't sustainable.

Seritage released a dreadful investor update on Tuesday, making the REIT stock's recent surge particularly ironic. The best news was that Seritage collected 91% of billed rents last quarter, up from 86% in the third quarter. Still, 91% is a long way from 100%. Investors shouldn't be too excited to learn that nearly a year into the pandemic, 9% of Seritage's tenants still can't pay rent.

Second, Seritage continued to lose current and future tenants. This included the termination of its final five leases to Sears and Kmart. Annual in-place rent fell to $96.1 million by the end of 2020, down from $107.7 million a year earlier. And whereas the REIT had signed leases for future store openings covering $84.3 million of annual base rent at the end of 2019, that figure stood at just $54.5 million as of Dec. 31, 2020.

Finally, while Seritage resumed some additional construction work last quarter, most of its redevelopments remain on hold. This implies that few of its signed-not-opened (SNO) leases will convert to rent-paying status in 2021. The delays also increase the risk of additional SNO lease terminations.

Right now, Seritage's underlying cash burn rate exceeds $100 million per year. In addition to about $150 million of annual cash interest expense and overhead costs, the REIT has to spend tens of millions of dollars a year to cover real estate taxes and property operating expenses for vacant real estate. By contrast, in-place base rent currently stands at less than $100 million, as noted above.

It will take years of aggressive leasing activity and redevelopment work -- which will have to be funded by additional asset sales -- just to reach breakeven. Moreover, fewer potential tenants are looking to expand now compared to two years ago, and Seritage will face more competition to attract them (due to high retail vacancy rates).

Seritage was one of many stocks to surge in January despite weak fundamentals. In the short term, that trend could continue. However, speculative manias never last forever. In the long run, Seritage's poor business prospects will inevitably undo any rally for the REIT stock. Companies with strong underlying businesses have a much better shot at delivering good long-term returns for investors.