Please ensure Javascript is enabled for purposes of website accessibility
Log In Help Join The Motley Fool
Free Article Join Over 1 Million Premium Members And Get More In-Depth Stock Guidance and Research
By Jason Hawthorne - Mar 14, 2021 at 6:25AM

The clot-removing device maker is nearly perfect, and it's priced like it.

The system of veins, arteries, and capillaries in our bodies could stretch around the world more than two times. That's a long distance for blood to flow smoothly. When a blood vessel is damaged, sometimes tiny platelets and then proteins conspire to prevent leakage by forming a clot. Unfortunately, this clotting can cause serious medical problems such as heart attacks and strokes.

Inari Medical (NARI -0.91%) has developed tools and procedures for two specific kinds of clots, deep vein thrombosis (DVT) and pulmonary embolism (PE), and doctors are rapidly adopting its approach. With a huge potential for growth and impressive financial metrics, Inari could be just what the doctor ordered for your portfolio. 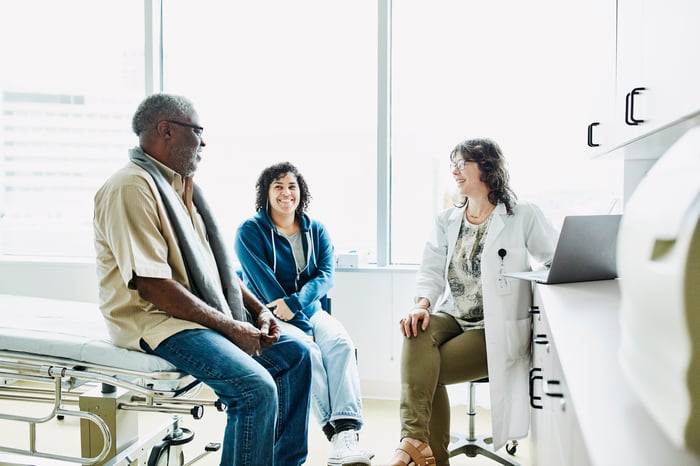 An easier solution for caregivers

Inari's products retrieve large clots from veins without drugs, which can be ineffective, expensive, and dangerous. Clot-busting drugs often require multiple administrations and a stay in the intensive care unit (ICU) due to bleeding risks. Typically, administering the drugs is only reimbursed by insurers at a low rate, despite the expense. That combination of factors created a need for an easier, more cost-effective treatment option.

It's now become clear that new option is Inari's ClotTriever for DVT and FlowTriever for PE. These tools are able to remove a large volume of clots without the drugs and ICU stay. Similar to the evolution in treating strokes and heart attacks, Inari's products represent a move toward catheter-based, minimally invasive procedures. Further, the disposable nature of the products means hospitals don't need to make large capital investments as they would with some equipment.

A better solution for patients

DVT is rarely life-threatening. However, when clots form in the deep venous system, about half of patients develop lifestyle-limiting pain and swelling. Nine in 10 DVT patients are unable to work 10 years after diagnosis. Since DVT develops over time and is usually only treated once it becomes an emergency, it is often too late for drugs to be effective. Conversely, once the blockages are identified and removed, it quickly reduces strain on the heart.

On the other hand, PEs are dangerous. The condition occurs when a clot breaks off and blocks an artery in the lung. It is the third-leading cause of cardiovascular death and the No. 1 cause of preventable deaths in hospitals. The mortality rate of PE if left untreated is estimated to be as high as 30%; it's 8% even when diagnosed and treated.

For investors who are excited about the clinical benefits of the company's products, the financial metrics might cause genuine euphoria. The average procedure generates $9,100, and the company recently reported astounding growth numbers despite headwinds from COVID.

In the fourth quarter of fiscal 2020, year-over-year revenue was up 144%. For the full year, sales climbed 173% to $140 million and gross margins topped 90%. Unlike many high-flying growth companies, Inari turned a profit of $0.43 per share. Management has a five-point plan to keep the growth going and is executing flawlessly so far. The company is also virtually debt-free, with a debt-to-asset ratio -- total liabilities divided by total assets -- of 0.07.

The impressive growth may just be getting started. Management believes fewer than 5% of patients who could benefit from its devices are being treated with them. Ultimately, they estimate the addressable market at $3.8 billion. This all bodes well for shareholders. The only caveat is valuation.

The stock currently trades at 37 times sales and more than 640 times earnings. Of course, growth like Inari's can justify even these extreme valuations in some peoples' minds. However, the current price is discounting a lot of that future growth already. For investors who love the financial profiles and recurring revenue of software-as-a-service (SaaS) businesses but lack exposure to the healthcare sector, Inari would be a great addition to a portfolio. Yet, at its current valuations, waiting for a pullback to buy shares may be warranted.