Please ensure Javascript is enabled for purposes of website accessibility
Log In Help Join The Motley Fool
Free Article Join Over 1 Million Premium Members And Get More In-Depth Stock Guidance and Research
By Lawrence Nga - Mar 16, 2021 at 8:15AM

Despite its size, Tencent can continue to grow for years to come.

After a breakout 2020, the S&P 500 index and Nasdaq Composite have scaled new records this year as well. Still, some investors are getting nervous -- and for obvious reasons.

For one, there are signs the market euphoria could be coming to an end. Stock valuations have hit dizzying levels, and as reality sets in, the rug might get pulled out from under the rally. Even Tesla stock -- once a market darling -- has dropped in value roughly 12% in the past month.

For long-term investors, market corrections are just part of the game. They provide potential opportunities to scoop up stock in world-class companies at discounted prices. At the moment, one of these great discounted stocks is Tencent (TCEHY -1.38%), Asia's biggest technology company. Here are two reasons Tencent's stock is worth buying during a market correction. 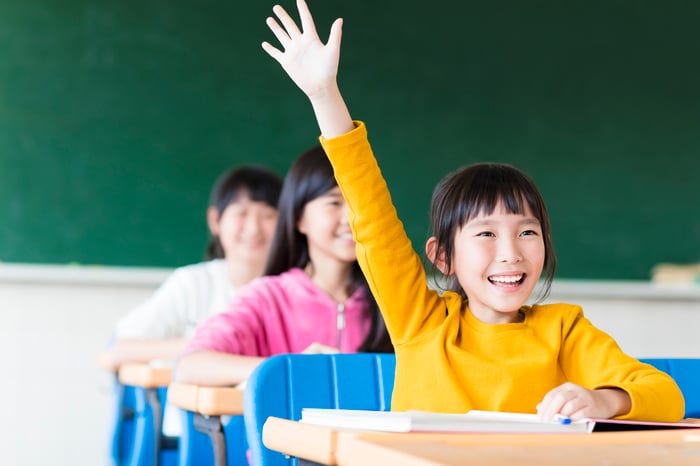 A track record of world-class performance

Over the last 15 years (since its IPO in 2004), Tencent has delivered revenue and profit growth at a stellar compound annual rate of 46% and 42%, respectively.

As a result, Tencent has amassed a cult-like following among investors. It is trading at 643 Hong Kong dollars (as of this writing), up a whopping 869 times from its adjusted IPO price of HK$0.74 (taking to account its 5-for-1 stock split in 2014). Anyone who invested $10,000 in Tencent's IPO and didn't sell now has shares worth $8.7 million.

Tencent has managed this thanks to its relentless focus on customer satisfaction. One of its early efforts at this was the creation of QQ, an instant messaging platform developed for the PC era. After making QQ the undisputed leader in instant messaging, Tencent expanded it to provide online services ranging from news to online games. That boosted the stickiness of QQ, keeping users coming back for more.

Tencent has since replicated QQ's success with WeChat, one of the world's biggest "super apps." From a simple mobile messaging app, WeChat has transformed into a place where users can do everything from online shopping and ride-hailing to playing games and socializing with their friends. All this is done without ever leaving the main app.

As a result, Tencent is now deeply ingrained in the lives of its 1.2 billion Chinese consumers. With users increasingly dependent on its services, Tencent is well-positioned to sustain its growth trajectory. For perspective, in the third quarter of 2020, Tencent's revenue and net profit rose 29% and 32% year over year. That's a remarkable growth rate for a company of Tencent's size with an equivalent market cap of roughly $775 billion.

Riding on the tailwinds of global digitalization

Over the past two decades, the internet has completely transformed the way we live. By creating game-changing tools and software powered by the internet, Amazon, Alphabet, and Facebook became three of the world's biggest companies.

Similarly, Tencent has benefited from the rise of the internet economy. From instant communication to online payments and games, Tencent's wide range of services will fuel its future growth.

But that's just half the story. Tencent has evolved into a major investor in other internet and technology companies. This includes stakes in Pinduoduo, Sea Limited, HUYA, Snap, and even Tesla, just to name a few.

These investments are a ticket to growth far beyond Tencent's own core markets. For example, Tencent's 25.6% stake in Sea Limited is helping it benefit from the rise of e-commerce and gaming in Southeast Asia.

All this is part of Tencent's master plan. By investing in emerging market leaders instead of trying to be a jack of all trades, Tencent can focus on what it does best while benefiting from growth outside its core competency.

A great company, but valuation is not cheap

By now, it's clear that Tencent is a great company with a bright future. Moving forward, the company has dual engines to fuel growth: the strength of its sticky product offerings and its unique capital allocation strategy.

Tencent currently trades at a P/S ratio just over 12. That's not excessive, given Tesla trades at about twice that multiple. But Tencent is also not a screaming buy, considering rival Alibaba Group Holding trades at a P/S of 6.7.

That said, if the much-talked-about market correction finally shows up, Tencent's stock will also drop. That will give investors a better entry point, and some margin of safety.