Please ensure Javascript is enabled for purposes of website accessibility
Log In Help Join The Motley Fool
Free Article Join Over 1 Million Premium Members And Get More In-Depth Stock Guidance and Research
By Will Healy - Mar 19, 2021 at 11:46AM

Are short squeezes the only factor driving the headphone maker's shares higher?

Most consumers or investors would not consider Koss Corporation (KOSS -4.44%) the most recognizable name in the headphone market. However, the Milwaukee-based manufacturer has received considerable attention in recent weeks as its stock has experienced dramatic swings due to short squeezes. Still, while speculation has boosted Koss, investors may want to think twice before buying into this consumer discretionary stock.

The state of Koss Corporation

Koss opened for business in 1958 after inventing stereophones. Nonetheless, while it prospered for a time, competition and failed attempts at diversification forced Koss to declare bankruptcy in 1984. Though it emerged from bankruptcy the following year, its stock has failed to gain traction for the last few decades. 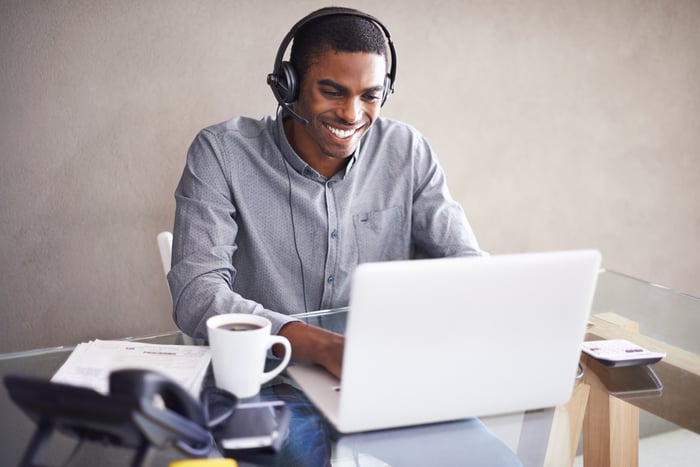 This seems to have changed thanks to WallStreetBets. Interest from this popular message board on the web site Reddit led to a spike in activity that took it to a high of $127.45 per share on Jan. 8, before it fell back below $20 per share two weeks later. However, the stock has seen renewed interest in recent days. It again topped $40 per share on March 10.

This stands in contrast to its performance before WallStreetBets drove speculation. Koss stock sold for under $1 per share as recently as the spring of 2020. It also traded for less than $4 per share at one point in late January. 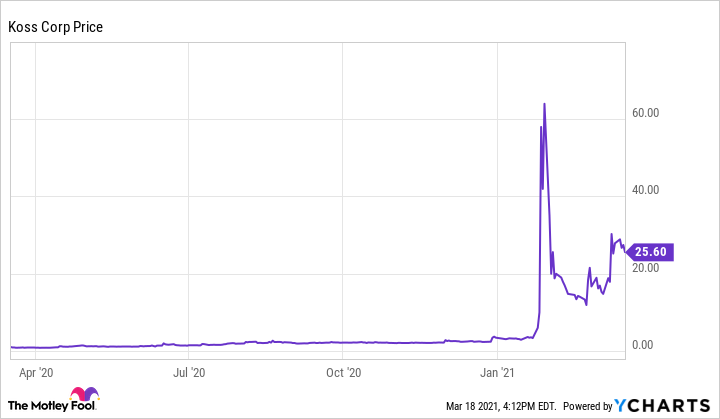 Despite its struggles, Koss derives some tailwinds from industry trends. Grand View Research predicts that its industry will benefit from a compound annual growth rate (CAGR) of 20% through 2027. CEO Michael J. Koss confirmed that increasing numbers of employees working and participating in meetings from home offices boosted demand for headphones.

Koss remains competitive in Bluetooth and wireless headset markets. For example, reviews on Amazon's site give its Koss Porta Pro On Ear Headphones a rating of 4.7 of five stars.

Unfortunately for Koss, this activity does not mean that its headphones necessarily offer the company a meaningful competitive advantage. While some reviews call the headphones "good for their price range," they confirm the need for lower pricing to gain an upper hand.

Also, Koss must compete with the likes of Apple and Sony, companies that have created full-fledged electronics ecosystems that extend well beyond headphones. Given this reality, one can understand why Koss currently holds a market share of less than 1%, according to CSIMarket.

The company's financials offer a mixed picture. During the first two quarters of 2021, revenue increased by 6% versus the previous fiscal year's first six months. Also, the company earned about $639,800 during that period, an improvement over the loss of around $526,400 reported in the first six months of 2020.

As a result, the company holds no current debt, and it generated $410,000 in free cash flow during the first six months of fiscal 2021.

However, unlike Koss, Sony also earns revenue from financial services and other sources that helped it to earn a significant profit during each of the last two quarters.

In contrast, Koss attributes its profit, free cash flow, and debt repayment primarily to a $506,700 paycheck protection program (PPP) loan that the government later forgave. Otherwise, the company would have earned about $133,000 during that period, almost 80% less than its reported net income.

Also, most of the rest of the net income gain came from the first quarter. During that time, the company reduced its cost of goods sold and selling, general, and administrative expenses. These cuts more than compensated for the 4% quarterly sales decrease it suffered over the previous year.

How to play Koss stock

Despite recent profits, most investors would not consider Koss stock a buy if not for speculation. What little competitive advantage Koss holds comes from charging a lower price for a commoditized product. Moreover, since its profit and positive cash flow came from cost cuts and loan forgiveness, the financials do not position Koss stock for long-term growth.