Please ensure Javascript is enabled for purposes of website accessibility
Log In Help Join The Motley Fool
Free Article Join Over 1 Million Premium Members And Get More In-Depth Stock Guidance and Research
By Adria Cimino - Mar 20, 2021 at 6:00AM

Why? They're focusing on one of the biggest coronavirus problems.

We all know the pandemic isn't over. But that doesn't mean it's too early to start thinking about which vaccine stocks will climb once the crisis eases.

"Vaccine stocks?" you might ask. "Won't vaccine demand be over by then?" Probably not.

Experts predict the coronavirus -- and new strains -- will be around well into the future. And that means countries will need to buy vaccine doses beyond the pandemic.

This also means many companies can benefit -- not just the ones that brought a vaccine to market first. Right now, 82 vaccine candidates are in clinical development and 182 are in preclinical development, according to the World Health Organization.

The following three companies are tackling new variants of concern -- strains that are more transmissible or more dangerous than the original coronavirus. And this work could make them winners farther down the road. 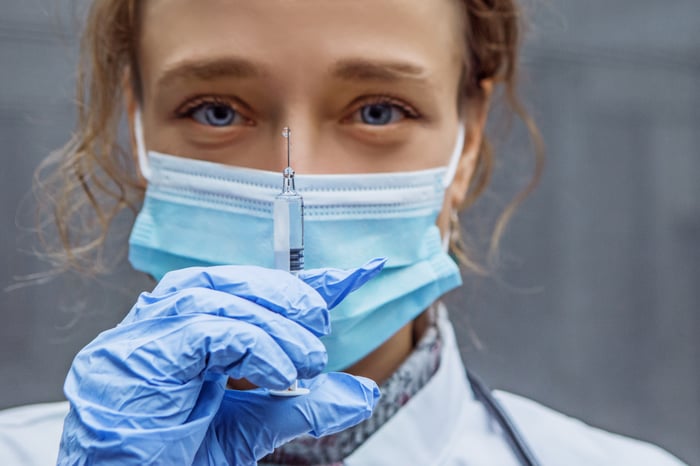 These results show that Novavax can handle today's variants to a certain degree. But Novavax is taking things a step further. The company also is investigating strain-specific candidates. Possibilities include a strain-specific booster or a combined vaccine. Novavax plans on launching a clinical trial by the middle of the year.

The advantage of Novavax is its original coronavirus vaccine candidate is close to market. That could generate revenue in the coming months -- and a possible new product could bring in revenue later on.

Gritstone Oncology (GRTS -0.51%) is at an earlier stage. The advantage here is that it's starting out with a focus on handling new strains. The company signed a clinical trial agreement with the National Institute of Allergy and Infectious Diseases earlier this year. Together, they plan to begin a phase 1 study.

Here's what's intriguing about Gritstone's approach: The company's investigational vaccine includes the coronavirus spike protein and parts of other viral genes. The idea is that the body's T cells can then identify and fight the virus -- even if it has greatly mutated.

Today's vaccines focus on the spike, which is the protein used to infect. The challenge is, if too many mutations alter the spike protein, the vaccine's efficacy decreases.

Inovio Pharmaceuticals (INO -4.57%) was one of the first to enter the vaccine race. But the path has been bumpy. The U.S. Food and Drug Administration (FDA) placed a partial clinical hold on the company's phase 2/3 trial in the second half of last year. And that slowed things down. The FDA had questions about the trial and the smart device used to deliver the vaccine candidate.

Since then, the FDA lifted the hold on the phase 2 portion. And Inovio completed enrollment in that part of the trial. But the hold remains on phase 3, pending questions about the delivery device.

So far, Inovio has only reported data from the phase 1 trial. The candidate produced neutralizing antibodies in most participants.

That's encouraging. But as the coronavirus strains have gained ground, it will be important to see data from the later-stage trial. This, and the fact that Inovio has lagged behind others, make me wary about the vaccine candidate's prospects to gain market share.

But here's what brightens the picture. Inovio has started working on a new "pan-COVID" vaccine to better address variants. The company is using its gene optimization algorithm to look at sequences from today's strains. The idea is to then create a synthetic spike protein to cover today's variants and those of the future.

This sort of vaccine could be a game-changer. That's because it could protect against possible variants before they even have a chance to develop.

Investing in Novavax, Gritstone, and Inovio only for their new strain projects is high risk right now because research is in the early stage. The companies haven't yet started clinical trials on these candidates. But if early trial results are positive, the story could quickly change. And that's why, for investors hoping to get in on the vaccines of the future, these three are biotech companies to watch.