Please ensure Javascript is enabled for purposes of website accessibility
Log In Help Join The Motley Fool
Free Article Join Over 1 Million Premium Members And Get More In-Depth Stock Guidance and Research
By Travis Hoium - Mar 23, 2021 at 10:02AM

Disney's growth days aren't behind it yet.

Can a company that doesn't currently pay a dividend be a great dividend stock? In the case of Disney (DIS 3.33%), it might be possible.

Disney had a decades-long history of paying dividends until 2020, when the COVID-19 pandemic threw the business into flux. Theme parks were closed, blockbuster films were delayed, and no one knew when there would be an end to the disruption, so management suspended the dividend. But Disney may be an even stronger dividend stock today than it was a year ago, because its cash flow will be more durable in the future, and this could be a growth stock once again.

What last year said about Disney

You can see in the chart below just how devastating 2020 was to Disney's business. The company took a restructuring and impairment charge of $5.7 billion last fiscal year, primarily to adjust the value of parks and resorts assets, and that drove the large net loss. But what I also see in the chart below is that Disney's revenue didn't fall off a cliff, and that's more telling about where the company is going in the future. 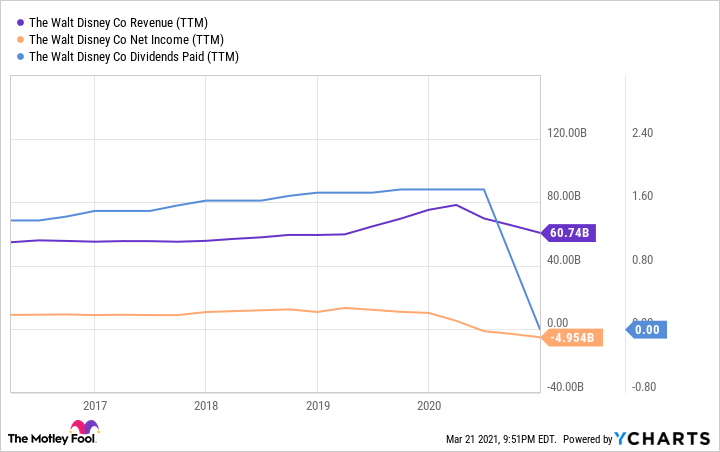 Despite parks and experiences revenue falling 61% to $2.6 billion and studio revenue dropping 52% to $1.6 billion last year, overall revenue was only down 23% to $14.7 million. That's because media networks revenue was up 11% to $7.2 billion and direct-to-consumer was up 41% to $4.8 billion. And it's this last segment that should excite investors the most.

Most of Disney's growth over the past year has come from Disney+, which now has over 100 million subscribers. The company has reconfigured its content around the new direct-to-consumer service, including new content from Marvel, Pixar, Lucasfilm, and Disney Studios.

If you look at the revenue trend above, Disney+ is what will ultimately drive Disney's growth. Not only is the streaming service adding subscribers at a rapid clip, but there are also opportunities to add to revenue in the future.

The current price is $6.99 per month, which compares to the Netflix Premium option with four simultaneous streams for $17.99 per month. There's lots of room to raise prices, which Disney is starting to do with an increase to $7.99 per month later this month. Disney can also bundle ESPN+ and Hulu, streaming services it also owns. Slowly but surely, Disney will expand both its user base and revenue per user.

Even though last year was tough for Disney, it generated nearly enough free cash flow to pay its previous dividend, which just shows what a great cash-generating company this is. 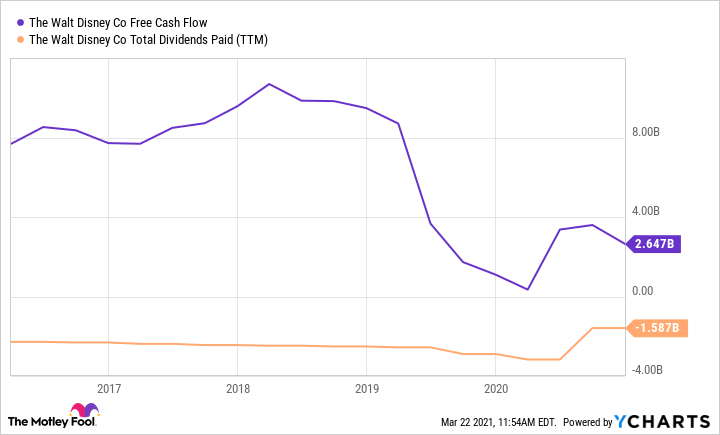 As parks and theaters open more fully, I think we'll see cash generation jump and the dividend begin flowing again. And with the addition of Disney+ to the business, there's an opportunity to grow cash generation long-term. This is a great dividend stock to own today, despite the fact that it may be a few quarters before investors see a dividend payment again.