Please ensure Javascript is enabled for purposes of website accessibility
Log In Help Join The Motley Fool
Free Article Join Over 1 Million Premium Members And Get More In-Depth Stock Guidance and Research
By Manali Bhade - Mar 23, 2021 at 7:03AM

Buying these stocks is a smart way to make that stimulus check work for your future.

The Internal Revenue Service has already released the third $1,400 stimulus check to around 90 million eligible Americans by direct deposit, and to an additional 150,000 Americans by mail. Many people who were affected by the COVID-19 pandemic will be using the money for their daily necessities and to pay bills.

However, many Americans -- especially those who don't need the money for day-to-day expenses and already have some contingency funds -- are investing this stimulus in the stock market. It's a smart move that can prove to be especially rewarding if you pick up fundamentally strong stocks. If you are a stimulus recipient and can invest this $1,400 for your future, then Jumia Technologies (JMIA -7.95%), FinVolution Group (FINV -0.89%), and ShockWave Medical (SWAV -2.20%) could be the right stock picks for you. 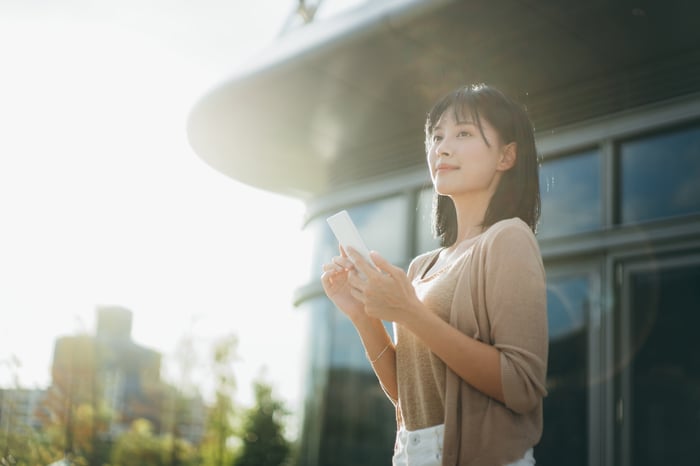 Jumia Technologies' stock has already soared over 1,600% in the last year. Headquartered in Germany, this "Amazon of Africa" operates an integrated ecosystem comprising an online marketplace, logistics business, and payments business.

Jumia is shifting from an asset-heavy, inventory-laden traditional retailer model to an online platform model. Hence, although the total revenue earned from commissions and fulfillment fees is lower, it generates higher profitability for the company. Additionally, the asset-light approach will also help the company to rapidly scale in the African market in future years. The company's strategy of shifting toward smaller-sized and more profitable everyday product categories and away from phone and electronics is helping improve unit economics, which translates into higher margins. Jumia is also focusing on improving overall usage efficiency by reducing cancellations, failed deliveries, and returns on cost efficiencies -- another major driver taking the company closer to breakeven.

Jumia Pay is also seeing rapid adoption, with total payment volume increasing 58% year over year and JumiaPay accounting for 35% of the total Jumia transactions in 2020. The company is working to position JumiaPay as a preferred digital payment option beyond Jumia marketplace, by partnering with prominent players across sectors in Africa.

Jumia is trading at a 12-month trailing price-to-sales (P/S) multiple of 25.7, which is steep. However, when this is compared to P/S multiples of e-commerce players such as MercadoLibre (MELI -7.89%) and Sea Limited (SE -3.96%), which are relatively small in market capitalization and focused mostly on developing markets, Jumia's valuation seems quite comparable. With a reach of over 600 million Africans and an annual active customer account of only 6.8 million at the end of 2020, Jumia has plenty of room to grow in the years ahead.

Shares of Chinese fintech company FinVolution Group have been on fire lately, rising over 470% in the last year and over 196% so far this year. Founded in 2007, the company was once a leading Chinese peer-to-peer platform, but now acts as a loan facilitator between borrowers and over 50 institutional funding partners.

FinVolution has strategically shifted its focus to borrowers with better credit profiles and has improved its risk management practices. Subsequently, the company now expects fourth-quarter vintage delinquency rates  (loans that originated in the recent quarter and are past due) to be below 3%, a significant improvement from 6% in the prior-year period. The company's fourth-quarter funding cost has also come down to 7.5%, from 10% in the prior-year period.

FinVolution's loan origination volume was up 24% year over year to 21 billion yuan in the fourth quarter, exceeding the upper end of the guidance range of 20 billion yuan. The company is guiding for a 56% to 87% year-over-year increase in loan origination volume in fiscal 2021. This is an achievable target, considering that FinVolution is rapidly expanding in the rather underpenetrated consumer finance market in domestic China and Southeast Asia. China's consumer credit-to-GDP ratio is only 13%, much lower than 20% of the U.S. The consumer credit-to-GDP ratio in Indonesia, the Philippines, and Vietnam is only 1%. With 116 million registered users and only 2.2 million active borrowers, there is great potential for the company to rapidly expand its loan volume. However, uncertainty about the COVID-19 pandemic may impact demand for consumer finance -- and that can have a detrimental impact on growth rates.

FinVolution is currently trading at a forward price-to-earnings (P/E) multiple of 6.6, which is quite cheap for a small company in the early stages of business. Prominent fintech players such as PayPal (PYPL -2.86%) and Square (SQ -6.68%) are trading at forward P/E multiples of 43.8 and 131, respectively. FinVolution has a strong balance sheet with cash of 4.6 billion yuan and a conservative leverage ratio (total loans outstanding on the platform divided by shareholder equity) of only 3.2 at the end of 2020.

In the fourth quarter, Shaofeng Gu, chairman and chief innovation officer of FinVolution, increased his ownership stake in the company to 29.6%. When top management continues to aggressively invest in a company, it is usually a bullish sign for retail investors.

Medtech company ShockWave Medical is putting a new twist on an old technology. Intravascular lithotripsy (IVL), a technique that has been used to break up kidney stones for decades, is now being used to break up calcium deposits that are blocking peripheral and coronary arteries. ShockWave estimates its annual total addressable opportunity is more than $6 billion. Since IVL is a highly safe, well-proven, affordable, and effective way to unblock arteries, it has the potential to become the standard of care.

ShockWave has been successful in demonstrating the superiority of IVL over angioplasty in unblocking severely calcified peripheral lesions prior to stenting in a study. The company has also demonstrated the robust efficacy and safety of IVL in treating severely calcified cardiovascular disease in the same study. ShockWave recently secured U.S. Food and Drug Administration approval for IVL in coronary artery disease indication (it was previously approved only for treating peripheral lesions). The future growth prospects of ShockWave will depend on educating healthcare providers and payers about the benefits of IVL and securing regulatory approvals in additional indications.

ShockWave's fourth-quarter earnings performance was quite impressive, with revenue jumping 59% year over year to $22.7 million and gross margins rising year over year from 61% to 72%. The company has a strong balance sheet with cash and cash equivalents of $202.4 million and only $25 million of debt at the end of 2020.

ShockWave is trading at a 12-month trailing P/S multiple of 58.7, which is almost three times the medical technology industry's average P/S multiple of 20. But considering the transformative potential of the company's IVL technology in the coronary artery space, share prices could soar even higher in 2021.