Please ensure Javascript is enabled for purposes of website accessibility
Log In Help Join The Motley Fool
Free Article Join Over 1 Million Premium Members And Get More In-Depth Stock Guidance and Research
By Keith Speights - Updated Mar 25, 2021 at 10:33AM

Moderna's (MRNA 1.04%) upward share price momentum appears to be fading. In 2020, the biotech's stock skyrocketed by more than 430% due to investors' excitement over its COVID-19 vaccine, mRNA-1273. Moderna started off this year on a positive note as well, with the stock tacking on over 75% more by early February. Since then, though, it's been mainly downhill.

Some investors may be of the view that the last several weeks were merely a temporary pullback. Others could see Moderna as a once-hot biotech stock with an unjustifiably high valuation that's in the early innings of a sustained decline. If the latter take is right, the opportunity to make solid returns with Moderna has gone by the wayside. But is it really too late to buy Moderna stock? 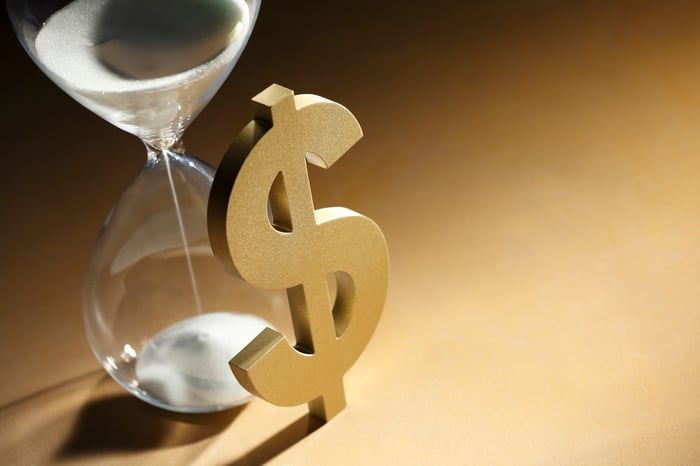 Fewer major catalysts in the near term

Major catalysts such as positive clinical updates and regulatory wins generally fuel big gains for biotech stocks. The bad news for Moderna is that will have fewer opportunities to deliver these kinds of catalysts in the near term.

Investors already know that mRNA-1273 ranks as one of the top COVID-19 vaccines based on efficacy. They're fully aware that Moderna stands to make well over $18 billion in sales from the vaccine this year alone. As a result, Moderna's market cap is close to $55 billion.

Granted, there are a few potential catalysts for Moderna on the way. The company could beat expectations in its quarterly updates. It's conducting clinical studies evaluating mRNA-1273 in teens and in younger children, and positive data readouts from those could boost the stock. Moderna also plans to advance its cytomegalovirus (CMV) vaccine into late-stage testing and expand the number of clinical programs in its pipeline.

However, none of these potential catalysts is likely to move the needle for Moderna in a spectacular fashion. They also present the possibility for the company to deliver disappointing news that causes the stock to fall.

There's one big potential game-changer for Moderna that could mean the stock is actually undervalued instead of overvalued. And it's an obvious one when you think about it.

Moderna's shares trade at below 3 times expected sales. That's a price-to-sales multiple that would make sense for a bank or an insurer. However, biotech stocks on average trade at more than 8 times sales right now. Big pharmaceutical stocks have an average P/S ratio of close to 5.

Why is Moderna's P/S multiple so much lower than biopharmaceutical industry averages? Because investors largely don't believe the tremendous revenue it has on the way for 2021 will be sustainable. They appear to think that demand for COVID-19 vaccines will plunge once the pandemic is brought under control. But what if that view is wrong?

Moderna executives have stated in the past that they anticipate the COVID-19 market will evolve into something more like the seasonal flu market is now. Pfizer CFO Frank D'Amelio recently said the giant drugmaker expects annual vaccinations will be required to keep the coronavirus threat in check. He also hinted at potential price increases for Pfizer's COVID-19 vaccine in the future.

If Moderna can generate anywhere close to the level of revenue it stands to make in 2021 on a recurring basis, the stock should have room to move higher. That isn't an unrealistic expectation. In fact, analysts' average 2022 revenue estimate for Moderna is around $13 billion. That's nearly three-fourths of what it expects to make this year. It also gives the company a P/S of a little over 4 -- still under industry averages.

Late -- but not too late

My view is that Moderna's valuation isn't too steep considering the real possibility that the biotech will have strong recurring revenue from here on out. I also think that its pipeline could produce some huge winners over the next decade.

For example, Moderna is developing a next-generation COVID-19 vaccine that could be even better than mRNA-1273. That vaccine could require only a single dose and should be able to be stored in standard refrigerators. If the candidate is successful in clinical studies, Moderna would likely be in an even stronger position over the long run in the COVID-19 vaccine market.

The company thinks that the CMV vaccine heading into pivotal testing this year could generate peak annual sales of between $2 billion and $5 billion if approved. And I look for Moderna to bring more messenger RNA vaccines to market within the next few years targeting other widespread viruses such as flu as well.

It's unrealistic to expect that Moderna will more than quintuple in value in one year again as it did in 2020. But while it's too late to get in on that kind of astronomical gain, my view is that it's not too late to buy the stock.