Please ensure Javascript is enabled for purposes of website accessibility
Log In Help Join The Motley Fool
Free Article Join Over 1 Million Premium Members And Get More In-Depth Stock Guidance and Research
By Lee Samaha - Mar 26, 2021 at 8:10AM

The aviation market is set for a recovery, but just how well placed is the airplane manufacturer to benefit from it.

With the commercial aviation industry set to embark on a multi-year recovery, it makes sense to start thinking about which aerospace stocks could benefit. Given Boeing's (BA -4.95%) dominant position in the industry, it's probably the first port of call for curious investors. With that in mind, let's take a look at where Boeing could be in the next five years.

The commercial aerospace industry will recover

The commercial aviation industry is attractive right now. Granted, the pessimists will focus on the inherent risk of ongoing lockdowns and travel restrictions due to the pandemic. However, the optimists will point out that air traffic data is improving. Also, the management of a slew of leading aerospace companies such as General Electric and Raytheon Technologies (RTX -3.04%) is forecasting a multi-year recovery. 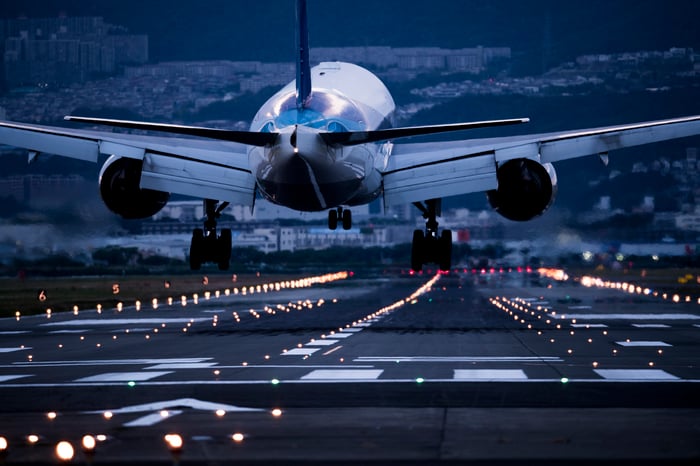 The optimists have a point. After all, the industry could hardly have a worse year than it had during the pandemic in 2020. With global vaccination programs in place and travel restrictions easing, it's a question of "when, not if" for a recovery.

To understand Boeing's role in the recovery and its profit potential, it's a good idea to break out exactly how the aviation giant makes money. The chart below shows how reliant the company was on earnings at Boeing Commercial Airplanes (BCA). Things were going fine for the company before two separate crashes of the 737 MAX in 2018 and 2019 caused a worldwide grounding in 2019. Then in 2020 the pandemic hit.

Boeing's Defense, Space and Security (BDS) business can provide some decent support, but the outlook is lackluster at best. For example, Boeing CEO Dave Calhoun, on the last earnings call, said, "the scale of government spending on COVID-19 response has the potential to add pressure to global defense spending in the years ahead."

Meanwhile, Raytheon Technologies CEO Greg Hayes believes his company can grow its defense revenue. However, this comes down to its international strength and exposure to "high-growth areas," such as defense systems, missiles, and intelligence rather than the "flat budgetary environment" he foresees. Finally, Boeing Global Services (BGS) will recover as passenger flights come back, but it's unlikely to move the needle in the way that BCA could. 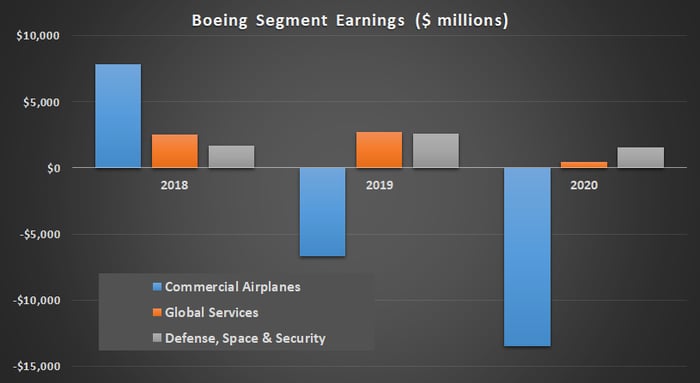 The key to BCA's future earnings is revenue growth. That may seem like an obvious statement, but consider the fact that BCA's profit margin is mainly dependent on production growth. As airline production ramps up, the unit cost of production tends to drop, meaning that each additional plane will be produced at a higher profit margin. Over time, as production and revenue go up, so does the profit margin. 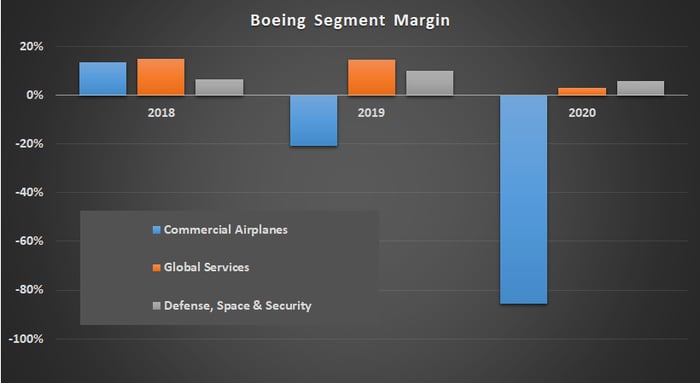 In turn, the key to revenue growth is orders on the narrow-body 737 MAX. Boeing had previously hoped for a wide-body replacement cycle to begin at the start of this decade, driven by orders for its 777X and 787 wide-body aircraft. However, the likelihood is that domestic air travel will recover more quickly than international travel. So it's likely that narrow-body demand will recover first.

Simply put, Boeing needs orders on its narrow-body flagship, the 737 MAX. The good news is orders are starting to come back. The bad news is they have a long way to go before Boeing can reclaim former glories. Moreover, the commercial aviation market is a lot different from what it was a couple of years ago. In a nutshell, it's a buyers' market now.

Previously, Boeing and Airbus were struggling to ramp up production to meet demand, but now it's a question of retaining existing orders and fighting over every new order. The following chart shows 737 and 737 MAX net orders compared to the Airbus A320 family of airplanes. It's been a nightmarish couple of years for Boeing and the 737 MAX in particular. In case you were wondering, the decline in net orders in 2019 and 2020 is due to cancellations. 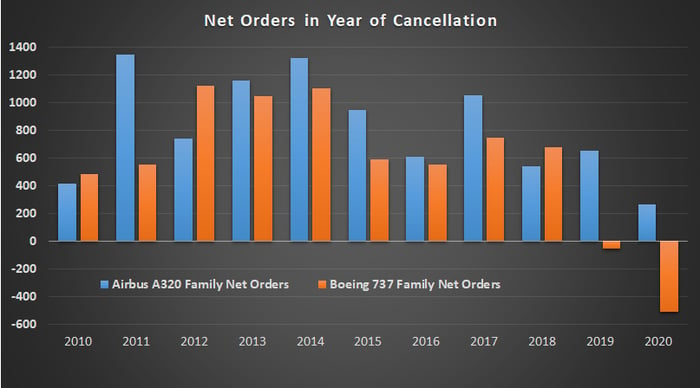 The question now is what kind of orders Boeing can win for the 737 MAX and at what price? An aviation recovery is highly likely, and end-market demand for narrow-body airplanes will come back. On the other hand, Airbus is a fierce competitor, and there's no guarantee that the 737 MAX will consistently win orders over the Airbus A320 NEO. Moreover, Boeing may end up discounting heavily to win orders for the 737 MAX.

Where will Boeing be in five years?

All told, Boeing will undoubtedly be a stronger company in a few years, but the high level of uncertainty around 737 MAX orders and pricing means it's tough to predict what the BCA margin profile will look like in the future. And that means it's hard to know just what level of earnings Boeing will have in the future. As such, it's probably not the best way to play a recovery in commercial aviation.