Please ensure Javascript is enabled for purposes of website accessibility
Log In Help Join The Motley Fool
Free Article Join Over 1 Million Premium Members And Get More In-Depth Stock Guidance and Research
By Zhiyuan Sun - Mar 28, 2021 at 6:45AM

Being able to scout for future growth potential is a crucial pillar of investing success.

It is not uncommon to see investors missing out on their best profit opportunities due to fright over a company's financial statements. Don't get me wrong -- doing due diligence on a stock you want to buy is essential. However, a company's stock performance is tied to its future potential, even though evidence from the past is the overwhelming source of information for many investors.

It can be misleading to look at past financials when a company is at a turning point in its growth story. That would be kind of like only using your rearview mirrors while driving. Today let's look at why a troubled airline, a company with a promising treatment for Alzheimer's disease, and an electric vehicle battery charging company are among the top growth stocks with exciting catalysts ahead -- even if their financial statements show a few red flags. 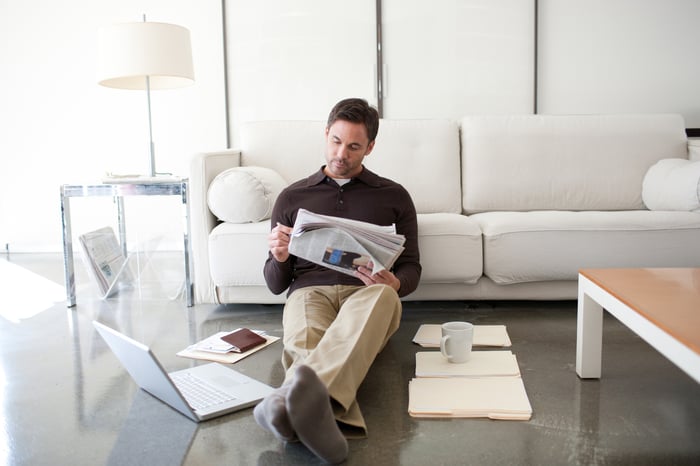 American Airlines Group (AAL -2.92%) stock has become a bargain after the coronavirus pandemic decimated its core business in 2020. Last year, the company's revenue declined by an astonishing 62.1% from 2019. Simultaneously, its operating loss amounted to over $10 billion compared to an income of $3.07 billion in 2019. But what makes it a buy now?

The coronavirus pandemic could dissipate quicker than expected. The Biden administration is on track distribute coronavirus vaccines to all American adults by the end of July. Depending on how other countries fare, global travel demand could return to normal by 2022. Trading at just 0.6 times revenue, American Airlines is incredibly cheap considering the company could see its sales and earnings recover (and then some) within the next 24 months.

American Airlines has the one of the largest and most efficient global airline networks. Last year, when it couldn't transport people, the company made money by utilizing its passenger fleet for cargo-only deliveries. It managed to run 5,200 such flights and delivered 167 million pounds of supplies across the world.

The airline also realized $1.3 billion in cost savings that will carry over after the pandemic ends. American Airlines is also upgrading its fleet to include the new Boeing 737 Max and Airbus A321 models in the coming year. Right now, the company has $14.3 billion in total liquidity to weather its operations until the threats posed by the virus subside. For investors looking for stocks with immediate or near-term rebound potential, American Airlines is a fantastic choice.

With a $1.9 billion market cap, no product revenue, and an estimated operating loss of $25 million for 2021, many investors are probably wondering how Cassava Sciences (SAVA 4.88%) could possibly be considered a top growth stock. Well, the secret sauce lies in its pipeline. You see, it's been nearly two decades since the U.S. Food and Drug Administration approved an Alzheimer's drug. To date, there is no cure for the disease, let alone a treatment that can slow its progression. Cassava is looking to change that.

Its experimental therapeutic, simufilam, will be ready for phase 3 clinical trials by the end of the year. In phase 2 clinical trials, 98% of patients who took the drug saw improvements in biomarkers associated with Alzheimer's disease, with impressive gains in episodic and spatial memory compared to a placebo.

Another open-label study verified these results, in which patients taking simufilam saw a 10% enhancement in their cognitive abilities and 29% enhancement in associative symptoms such as anxiety, delusions, and agitation. While that might not seem like a lot, one path forward is for the company to combine simufilam with current standard of care drugs for Alzheimer's, such as donepezil, for synergistic effects.

Right now, Cassava is pretty well capitalized, with more than $280 million in cash on its balance sheet to carry out further investigations. That's a lot considering its cash use will only amount to $20 million to $25 million this year. Given the multi-billion dollar market opportunity, if successful, this is definitely a solid biotech you should add to your watchlist.

Similar to Cassava, Blink Charging (BLNK -4.53%) has a sizable market cap ($1.3 billion), negligible product revenue, and is running at an operating loss. Nonetheless, I think its stock is an exciting investment. As it turns out, Blink Charging is laying the foundation of an electric vehicle charging network across the nation.

So far, it has deployed over 9,600 residential charging stations and 5,700 commercial stations in 40 states. There are more than 190,000 members registered for its services.

By the end of the decade, Bloomberg projects the number of electric vehicles in the U.S. will increase to 13 million, up from 1 million today. That's a massive total addressable market, and is just what Blink Charging needs for commercial success. Right now, its charging stations are compatible with all-electric vehicle models across North America, including those manufactured by Tesla (granted, an adapter is required). Investing in infrastructure is a long-term investment that pays off handsomely, making Blink Charging an intriguing stock to buy and hold.

5 Ultra-Popular Stocks to Avoid Like the Plague in February