Please ensure Javascript is enabled for purposes of website accessibility
Log In Help Join The Motley Fool
Free Article Join Over 1 Million Premium Members And Get More In-Depth Stock Guidance and Research
By Jeremy Bowman - Mar 29, 2021 at 5:45AM

The similarities to the dot-com bubble are uncanny.

The bubble in electric vehicle (EV) stocks may already be starting to pop.

Shares of Tesla (TSLA 0.14%) are down 28% from their all-time high, while Nio (NIO 4.90%), the leading Chinese EV maker, is off 43%. Other popular EV-related Robinhood stocks like Churchill Capital (CCIV), Blink Charging (BLNK 0.00%), Nikola (NKLA 2.28%), and Workhorse (WKHS 2.81%) are all down significantly from previous peaks. Looking out at a longer time frame, however, these stocks are still up multiples from where they were just a year or two ago before the EV sector took off. In other words, if this is a bubble, these stocks could have a lot further to fall.

In fact, the sector resembles the height of the dot-com bubble in 1999 in a number of ways. Keep reading to see five of them. 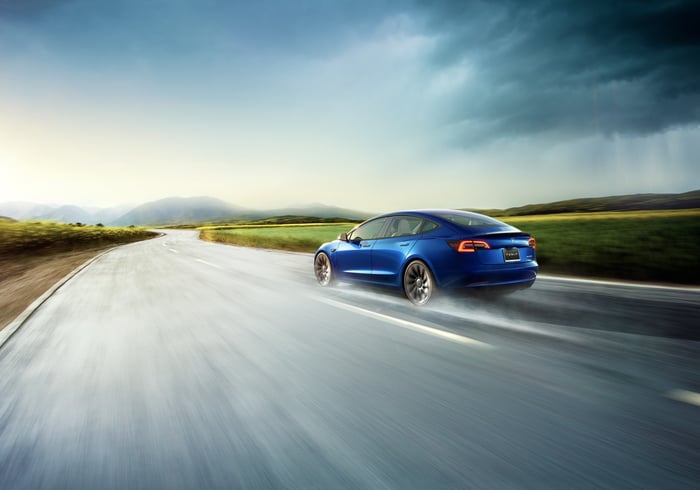 In the late 1990s, Intel, Cisco, Microsoft, and Oracle were the titans of tech, much in the way that Tesla and Nio represent the EV sector today. From the start of 1995 to the Nasdaq peak in 2000, a basket of those four stocks gained 2,150% (or more than 80% a year) as enthusiasm for all things internet-related reached a fever pitch. Once the Nasdaq peaked, however, those stock crashed, giving up most of those gains in less than a year.

This time around, EV stocks have seen a similar eye-popping surge. Since the start of 2020, Blink Charging has gained as much as 3,000%, while Nio and Workhorse had jumped more than 1,000%. Tesla, whose market cap approached $1 trillion at one point, had gained nearly 1,000% at its height.

The massive run-up in tech stocks in the late 1990s proved to be unsustainable. The current one in EV stocks is starting to look similar.

2. A mania for new issues

The dot-com boom saw a surge in demand for IPOs, and the boom was named "dot-com" in part because investors gladly bid up any new issue with that attached to its name, no matter whether it was Amazon.com or Pets.com.

Much like the current market has been characterized by a mania for SPACs (special purpose acquisition companies), so the late 1990s were with IPOs, which regularly doubled or more on opening day. In fact, some internet stocks set goals of jumping 300% or even 400% on their IPO day, according to Fortune, and the speculative fever around those stocks made that possible.

Today, the favored way of going public is through SPACs, which face less regulatory scrutiny than IPOs, and EV SPACs in particular have seen some wild gains. Prior to its merger with Lucid Motors, Churchill Capital IV stock ran up nearly 500%. Nikola had gained around 700% before that stock unraveled amid fraud allegations forcing CEO Trevor Milton to step down. Much like tech stocks went public in the 1990s with little evidence showing a viable business, today many EV companies are going public with no revenue or products at all, just plans to produce them.

3. A flood of amateur investors in the market

The dot-com boom coincided with a breakthrough in market access as new platforms like E*Trade allowed investors to easily trade and manage their own portfolios without going through a professional broker. That, along with surging stock prices, beckoned millions of new investors into the market, many of whom eventually lost their savings.

This time around, Robinhood and similar mobile trading apps have encouraged a new generation of investors, and many of those have focused on EV stocks. Among the 100 most-popular Robinhood stocks are a number of EV companies, with Tesla at No. 2 and Nio at No. 5; Plug Power and FuelCell Energy, which focus on hydrogen fuel cells; Churchill Capital IV; Workhorse; Nikola; Blink Charging; and Xpeng, another Chinese EV maker. With nine EV-related companies on Robinhood's top 100 list, it's clear that the sector has attracted the newest generation of investors, many of whom may have no previous investing experience.

Back in 1999, analysts were regularly doubling their price targets to keep up with the surging growth in stocks. That created a feedback cycle as the higher Wall Street targets seemed to justify the stock gains. Henry Blodget famously slapped a $400 price target on Amazon in late 1998, calling for the stock to roughly double, which set off a surge in other internet stocks and even stocks of Amazon's book-selling peers like Barnes & Noble and Books-A-Million. Amazon would go on to break through that price target before it cratered well below $400 in the dot-com bust.

Today, the role of head market cheerleader is being played by Cathie Wood, founder of growth ETF manager ARK Invest, whose ETFs doubled last year amid a surge in stocks like Tesla. Wood received fanfare when her early 2018 split-adjusted price target of $600 for Tesla calling for it to jump by 1,000% turned out to be right. Now, Wood sees the stock jumping another 400% to $3,000, though that prediction has faced a fair amount of skepticism.

5. The technology is revolutionary

Perhaps the most important similarity between EV stocks and early internet stocks is that both are premised on significant technology revolutions. While there was some debate back in the 1990s if the transformative power of the internet would be truly lasting, today it's clear that the internet has changed almost every facet of modern life from how we shop to how we communicate to even how we look for love. The challenge of the dot-com boom wasn't determining that the internet was revolutionary, but finding the stocks that would be winners and separating those from the ones that would eventually go bankrupt.

This time around, EVs have reached a tipping point where it looks relatively certain that the technology will go mainstream. Eventually, most cars on the road will be EVs. Governments like California's are instituting future bans on internal-combustion vehicles. Legacy automakers like Volkswagen and General Motors are overhauling their businesses to produce EVs at scale, and the market is rewarding them with surging stock prices.

Electric vehicles in an overall sense are winning in the battle against internal-combustion vehicles, but that is much different from every EV stock being a winner. While there will be a few companies that will lead or even dominate the market, many will fizzle out, especially considering that margins in auto manufacturing are traditionally thin.

Given that reality, investors may want to temper their expectations for the sector. Much like the situation in 1999, valuations will eventually return closer to historical means as the mania around the newest breakthrough technology subsides.