Please ensure Javascript is enabled for purposes of website accessibility
Log In Help Join The Motley Fool
Free Article Join Over 1 Million Premium Members And Get More In-Depth Stock Guidance and Research
By David Jagielski - Mar 31, 2021 at 6:40AM

Although these stocks have been underperforming the S&P 500 over the past year, investors shouldn't ignore them.

There are two things I look for when investing in stocks: high gross margins and cheap valuations. If the cost of goods sold is eating up a good chunk of a company's revenue, it will be difficult for the business to turn a profit. And if its shares are trading at a low multiple of earnings, that can help sweeten the deal and make it a solid investment that other investors may be overlooking. 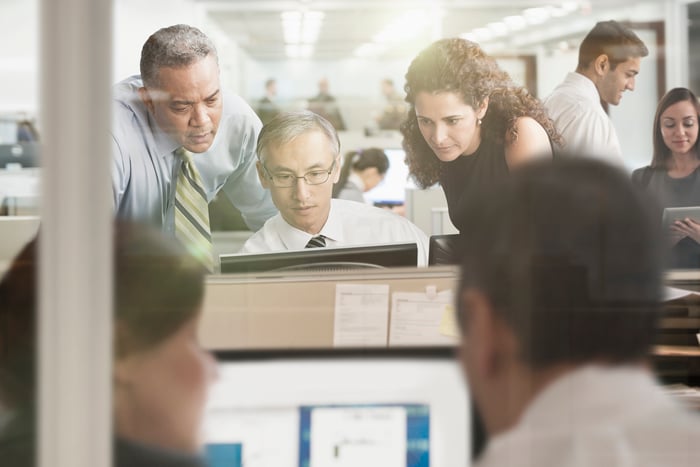 Amgen is coming off a tough year in 2020, during which the pandemic disrupted its business. On Feb. 2, the company released its year-end results and noted that in the fourth quarter (ended Dec. 31, 2020), physician-patient interactions were still not back to where they were before the pandemic began, although they were rebounding. That impacts the number of drugs that doctors are prescribing, which negatively affects Amgen's sales. Product sales for the year totaled $24.2 billion and grew 9% year over year, but that was mainly as a result of Otezla -- which Amgen owns through its acquisition of Celgene. The acquisition didn't close until late 2019, so Amgen's numbers in 2020 included a full year of sales from Otezla ($2.2 billion), but only a modest $178 million in the previous year. Without that bump in sales, Amgen's revenue would have been flat.

However, with the rollout of COVID-19 vaccines, the pandemic could soon come under control. And that could lead to more physician-patient interactions, which, in turn, would mean much stronger numbers for Amgen. Despite the challenges of 2020, the company still reported a profit of $7.3 billion, which was down 7.4% year over year. A big part of the reason it can consistently produce profits is due to its gross margins, which were at 76% last year, slightly down from over 80% in previous years.

With a forward price-to-earnings (P/E) multiple of about 15, Amgen looks like a cheap buy compared to the average stock in the Health Care Select Sector SPDR Fund, which investors typically pay 27 times earnings for. Although the healthcare stock has underperformed the S&P 500 over the past 12 months (26% returns versus 55%), it could be an underrated investment right now that has a lot of potential upside in a post-pandemic world.

Investing in energy stocks hasn't been all that safe over the past year. Since not much travel is taking place, there isn't a whole lot of demand for oil. But the industry could again be a popular place to invest in. With the price of oil back up to over $60 per barrel (in 2020 it was below $50 for most of the year), the summer travel season coming up, and people eager to get their lives back to normal, things haven't looked this good for the industry in a while.

TC Energy could make for a solid investment, as its business is more stable than most in the industry. In 2020, it generated 13 billion Canadian dollars in revenue, down just 1.9% from the previous year. However, profits of CA$4.9 billion rose by 10.8% as it benefited from lower tax expenses. The company credits its stability during this time to the regulated and long-term contracts it has with its customers, pointing out that it is "largely insulated from volatility associated with volume throughput and commodity prices."

Last year, the company's gross margin was at 74%, which is the highest it has been in recent years. The stock has only risen by 10% in the last 12 months, but with a forward P/E of less than 15, it also makes for an attractive value buy right now. Industry giant ExxonMobil trades around 21 times its future earnings.

Another great area to invest in as the pandemic (hopefully) abates is tech. Oracle provides cloud-based services and hardware that equips companies with what they need to become more digitized. Whether it is allowing employees to work remotely or utilizing more of the cloud, companies are looking for ways to adapt. Research and advisory company Gartner projects that in 2021, end-user spending on cloud services will rise by more than 18% and be worth $305 billion. And that trend isn't going to stop -- in 2022 the company expects it will rise by a similar percentage.

When Oracle released its most recent results on March 10, it only reported positive year-over-year sales growth from its cloud-based services and licenses over the nine-month period ending Feb. 28. Sales from those segments rose by 3.6% while hardware and other services declined. And again, with a strong gross margin of around 80%, the company had no trouble not just turning a profit, but growing it. Net income of $9.7 billion over the last three quarters was up 38.4% from the prior-year period as Oracle brought down its operating expenses by 2.4% and benefited from a lower tax bill.

With a 41% increase in price over the past year, Oracle's stock has been the best-performing one on this list. But it still trades at a modest forward P/E of 15 -- nowhere near tech giants Microsoft and Amazon, which trade at 32 and 65 times their future earnings, respectively. Although its growth numbers haven't been all that great, there's a lot of potential in both the short and long term as companies will likely make long-overdue upgrades as things get back to normal. That, combined with the emergence of cloud-based services, makes Oracle a cheap and underrated investment that you can safely hold for many years.