Please ensure Javascript is enabled for purposes of website accessibility
Log In Help Join The Motley Fool
Free Article Join Over 1 Million Premium Members And Get More In-Depth Stock Guidance and Research
By Jim Halley - Updated Apr 1, 2021 at 8:12AM

This is a huge deal for the industry; New York is the second-most-populous state (behind California) to approve adult-use cannabis sales. I have a few stocks in mind, which are already active in the state, that are especially well-poised to benefit from legalization. 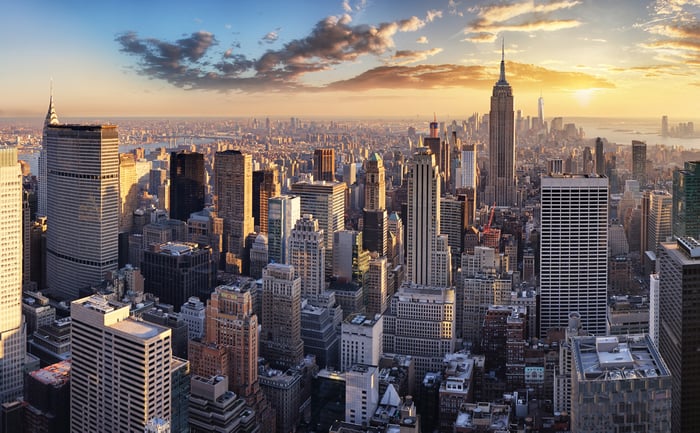 Who has a foothold?

Cuomo said the legislation could bring in $350 million in annual taxes and create between 30,000 and 60,000 jobs for the state. With the proposed legislation expected to have an effective tax rate of 13% on marijuana sales, that means Cuomo is anticipating nearly $2.7 billion in annual sales of adult-use marijuana.

As we've seen in other states, such as Illinois and Arizona, companies that already have a solid footing in the state's medical marijuana sales stand to benefit the most, at least initially. Last year, Illinois gave existing medical cannabis companies an edge, allowing them to license existing medical marijuana stores for adult-use and then allowing them to add an additional store for recreational sales. Arizona, which is opening up to adult-use sales this year, is giving priority to companies that already have medical-marijuana licenses there.

New York has capped the number of medical marijuana businesses at 10 in the state, with each allowed four licenses. The companies with the biggest market caps in that group are Curaleaf Holdings (CURLF 1.81%), Green Thumb Industries (GTBIF 0.23%), and Columbia Care (CCHWF -0.53%).

Curaleaf's headquarters is in neighboring Massachusetts, and the company, which has 101 retail locations in 23 states, is heavily focused on the northeast, particularly in limited-license states, which is the route New York took for medical marijuana. In its four New York medical-use dispensaries, Curaleaf said it already employs 210 people.

"New York has the potential to be one of the most vibrant cannabis markets in the U.S., and proposals to legalize adult-use need to be focused on ensuring that the state can achieve considerable tax revenue, job creation, and social equity benefits as soon as possible," said Joe Bayern, CEO of Curaleaf, in a recent press release.

Curaleaf has been steadily growing revenue. In 2020 it reported $626.6 million in revenue, up 184% year over year. It has also been moving closer to profitability with seven consecutive quarters of positive adjusted EBITDA and said it had $144 million in adjusted EBITDA last year, up 456% over 2019.

The company's stock is up more than 268% over the past 12 months, but has dipped about 5% in the past month, making its shares a little more tempting of a buy right now.

Columbia Care has a home-field advantage

Columbia Care is headquartered in New York City, so it may have a built-in advantage as it tries to grow business in the state. The company, which was co-founded in 2012, by current CEO Nicholas Vita, a former Goldman Sachs vice president, reported full-year 2020 revenue of $197.9 million, up 151% year over year. It also had a record adjusted EBITDA of $9.5 million in the fourth quarter, an increase of 124% over the prior quarter and its second consecutive quarter with positive adjusted EBITDA. Columbia Care's share price is up more than 275% over the past 12 months, but down about 4% over the last month.

It is planning to close on its purchase of Green Leaf Medical later this year, giving it a bigger presence in Maryland, Ohio, Virginia, and Pennsylvania. The company was bullish in its 2021 outlook, predicting combined revenue between $500 million and $530 million and annual combined adjusted EBITDA between $95 million and $105 million, and it said those numbers excluded any impact from New York's legalization.

Chicago-based Green Thumb is another huge multistate operator, with 13 manufacturing plants, 56 retail locations, and licenses for an additional 41 dispensaries. The company bought its way into the New York medical marijuana market by purchasing Fiorello Pharmaceuticals in 2019 and has three retail locations in the state, with a fourth one planned to open in Nassau County on Long Island.

Green Thumb already experienced the move from medical-only sales to medical and adult-use sales in Illinois and fared well. It operates in 12 states and last year reported revenue of $556.6 million, up 157.2% year over year. It also just reported $22.5 million of net income in the fourth quarter, its second consecutive quarter of positive net income.

As with the other two companies, its shares did phenomenally well last year but have come back to earth a bit recently. Green Thumb's stock is up more than 327% over the past 12 months but is down more than 30% over the last month. One cloud hanging over the company is that it is being investigated in a pay-to-play scandal regarding the awarding of state marijuana licenses, according to The Chicago Tribune. 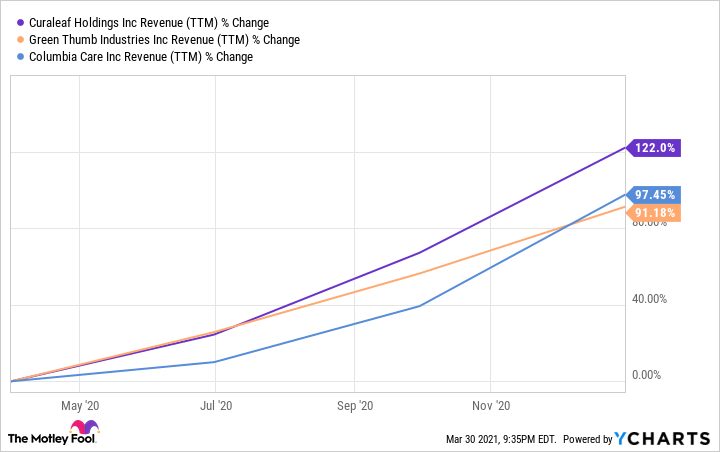 All three of these companies have been growing revenue at a great rate, and are ready to do even better now that New York will be opening up to adult-use sales. I think Columbia Care, even though it's the smallest of the three, will benefit the most from the move. It has the closest connection to the state, and if its revenue truly does increase this year by 252% as the company predicts, it will fare even better if adult-use sales in New York start by the end of the year. Its shares seem to have the most room to grow as well. At 4.8, it has the lowest price-to-book (PB) value of the three stocks, compared to 6.6 for Green Thumb and 7.2 for Curaleaf.

Curaleaf, though, is the safest pick right now. It has the most resources and may be profitable by the end of the year. Green Thumb might be the riskiest pick because of its pending investigation, but if that blows over, it has nearly as many resources to adapt to adult-use sales in the state as does Curaleaf.