Please ensure Javascript is enabled for purposes of website accessibility
Log In Help Join The Motley Fool
Free Article Join Over 1 Million Premium Members And Get More In-Depth Stock Guidance and Research
By Brett Schafer - Apr 4, 2021 at 8:30AM

The company is the backbone behind many renowned restaurant chains.

Olo (OLO 2.29%) is a software-as-service (SaaS) business powering the digital offerings of many popular restaurant chains. The stock made its debut on March 17 after its initial public offering (IPO) raised $450 million in a deal that saw strong demand from the market. Here's what investors should know about this high-growth company and why SaaS investors should put it on their watchlist. 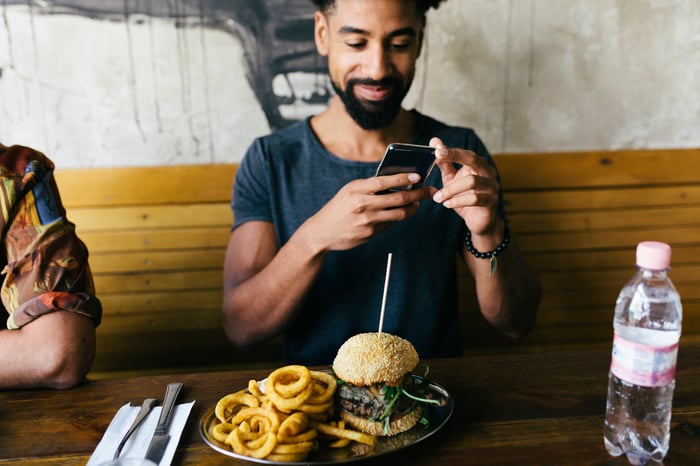 Olo is a software platform that serves multilocation restaurant chains. It provides tools for ordering, dispatch (i.e. delivery), and rails (optimizing ordering, menu items, and pricing into the restaurant's point of sale (POS) system). Customers can subscribe to one, two, or all three of these modules when using Olo's products. The company serves many high-growth restaurant brands, including Five Guys, Shake Shack, and Wingstop. According to its IPO prospectus, Olo typically sells its software at the corporate level so the implementation process can be streamlined all in one go.

Restaurants use Olo to improve the customer journey, optimizing the three-step order to kitchen to customer process. Why is this important? Because of all the different methods customers have to order from a restaurant these days. There are third-party delivery apps like DoorDash, the restaurant's own website or mobile application, and voice orders (over the phone or smart devices), to name some of the popular ways people like to get their food. Building the software tools to streamline all of these platforms for a restaurant's POS system is not something many companies can do on their own, which is why Olo provides so much value to these chains with dozens or even hundreds of locations.

Getting the ordering process right is crucial. A Salesforce study found that 50% of consumers will switch brands if a restaurant's digital solutions are not meeting their needs. When a company chooses Olo, it hopefully has prevented this problem from happening, which should keep customers happier and more likely to come back and order from that location again.

Olo's business has done quite in the lead-up to its market debut. Gross merchandise volume (GMV), which is the total amount of dollars flowing through Olo's platform, has nearly doubled each of the last five years. To put that in perspective, in 2014 Olo surpassed $100 million in cumulative GMV. In 2020, that number hit $14.6 billion.

This GMV growth has translated into sales growth as well. Total revenue grew from $31.8 million in 2018 to $98.4 million in 2020. Over that same time span, gross margin expanded from 66% to 81%, which shows how profitable the company's core software business is. And even though Olo is growing its top line at a high double-digit rate, it was able to generate $16.1 million in operating income last year.

Olo is also going after a market that looks to be in its early innings. In 2019, digital and delivery made up only 10% of restaurant spend, significantly less than other retail segments. In 2020 that percent likely rocketed higher, but the tide is still definitely headed in Olo's direction.

With $98.4 million in sales, $16.1 million in operating income, and a market cap of $3.7 billion as of this writing, Olo trades at a premium valuation. Its price-to-sales ratio (P/S) of 38 and price-to-operating.-income ratio (P/OI) of over 230 are nosebleed multiples, even compared to those of its software peers.

It has competition coming from its partner DoorDash, which just launched a white-label service for deliveries made on a restaurant's own website. It is also possible that the huge demand boost from COVID-19 lockdowns was temporary, making Olo's valuation look cheaper than it actually is. However, with all these factors at play, investors should remember that Olo has a track record of phenomenal growth, and a ton of opportunity ahead of it as it tries to get its software into as many restaurant chains as possible.

Olo is a fascinating business that looks to be firing on all cylinders as it enters the public markets. It has high margins, a strong value proposition to its restaurant partners, and may just be the software solution that not only helps restaurants increase their profitability but also improve the customer experience. While Olo clearly trades at a premium, this is a business that any software investor should put on their watchlist.

Hungry? Buy These 2 Restaurant Stocks Instead of Going Out to Eat

These 3 Recent Market Debuts Are Down Big: Why I'm Ready to Buy

Should You Buy Toast Stock? A Breakdown of Restaurant SaaS

This Stock Is Radically Transforming a Multitrillion-Dollar Industry