Please ensure Javascript is enabled for purposes of website accessibility
Log In Help Join The Motley Fool
Free Article Join Over 1 Million Premium Members And Get More In-Depth Stock Guidance and Research
By Adria Cimino - Apr 6, 2021 at 6:00AM

It all depends on the U.S. vaccination program.

Over the past 20 years, Disney (DIS 3.33%) has generally grown annual profit and revenue -- until the coronavirus pandemic sent the entertainment giant into a tailspin. Disney parks temporarily closed, its ships stopped sailing, and the company reported an annual loss. Only its streaming services offered a bit of a bright spot. People were spending more time at home -- so they opted for at-home entertainment.

But better days are ahead. And investors and Disney fans may start seeing some of that magic soon. The U.S. has now vaccinated more than 21% of the adult population. And the government has bought enough doses for all Americans who want a vaccine. Even better, the goal is to make those vaccines available by the end of May. This is a key element to end the pandemic. And that means it's a key element to reviving Disney's biggest business: its parks. Considering this, let's take a look at where Disney may be in a year. 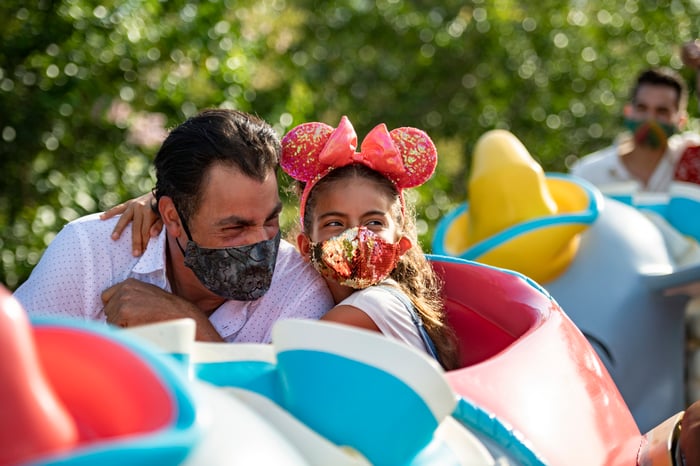 When most of us think of Disney, we think of its parks. And that segment, which also includes experiences and products, made up nearly 38% of annual revenue in 2019. That's the biggest portion of any business segment. The Florida theme parks -- including The Magic Kingdom -- reopened last July. They had been closed for four months. On April 30, Disney plans to reopen Disneyland and Disney California Adventure -- they've been closed for more than a year.

Disney expects its Paris park to remain closed through the second quarter as the country struggles with coronavirus cases. As vaccinations pick up, though, it's reasonable to imagine that all of Disney's parks may be open a year from now.

It's too early to say whether the parks will be open at full capacity by then. Right now, for instance, the Florida parks are at 35% capacity. But here's the good news. Even at that level, revenue generated surpassed the costs of opening them, according to Disney. So, a year from now, park revenue may be on the road to recovery.

At the same time, the strength that has carried Disney through this crisis also will be contributing to growth. And here, I'm referring to streaming service Disney+. The service garnered 94.9 million subscribers in just a little over a year of operations. That beat even Disney's highest expectations. The direct-to-consumer unit, which includes Disney+, posted a 73% gain in revenue in the recent quarter. But the unit still operates at a loss because of the expense of launching and ramping up Disney+.

But here's more good news. Disney expects it will post peak losses for Disney+ this fiscal year. That means we can expect steady improvement from that point -- and profitability in fiscal 2024. The company plans to roll out the streaming service to most markets by the end of this year. And Disney will continue to invest in content because it considers that is the best way to keep subscribers.

All of this sounds great. But don't expect Disney to be back to 2019 revenues a year from now. CEO Bob Chapek said during the February earnings call that he wouldn't comment on that possibility. He did say that if the government meets vaccination goals, it would be "a game changer" and "could accelerate our expectations and give people the confidence that they need to come back to the parks."

The vaccination rollout will determine what the Disney picture looks like a year from now. If it goes smoothly, park revenue and Disney+ revenue could be major growth drivers -- and key to bringing Disney back to an annual profit. Investors believe in Disney. The stock has climbed 99% over the past year. That's in spite of the coronavirus woes. So, once the situation improves, I expect this travel stock to continue marching higher -- over the long term.