Please ensure Javascript is enabled for purposes of website accessibility
Log In Help Join The Motley Fool
Free Article Join Over 1 Million Premium Members And Get More In-Depth Stock Guidance and Research
By John Rosevear - Apr 9, 2021 at 7:03AM

Hyliion and the SPACs merging with Hyzon and Faraday Future had a rough ride last month.

Many electric-vehicle (EV) stocks had a rough ride in March. Nearly all fell sharply in a broad sell-off early in the month, as concerns about rising interest rates in the United States led investors to reduce positions in higher-risk names.

While some, including category leader Tesla (TSLA 1.24%), were able to rally as March came to a close, other less-prominent names continued to lag into April.

Here's how these three companies' stocks fared in March, according to data from S&P Global Market Intelligence.

Here's a look at how all three stocks fared in March, with Tesla (in purple) added for reference. 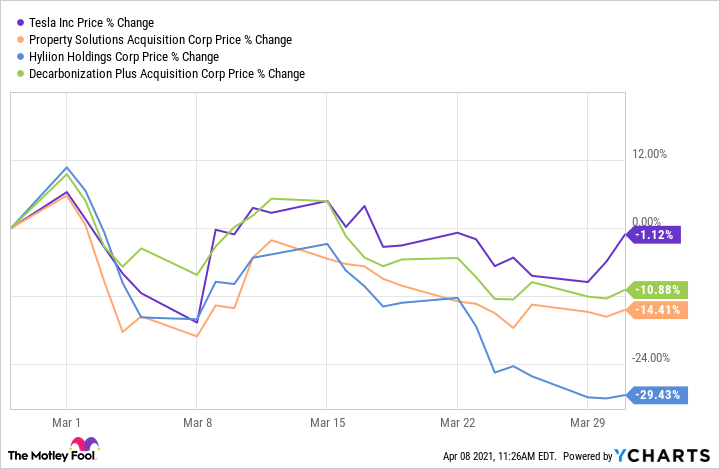 Broadly speaking, EV stocks tend to follow Tesla's ups and downs. But as you can see, Tesla's big bounce at the end of March didn't give these other stocks much of a lift. I think the explanation for that is pretty simple: While Tesla is a well-established business, these three companies have very little revenue. And while all have some promise, a closer look might help explain why EV investors remain wary.

The next major events for Hyzon and Faraday will be the completion of their SPAC mergers. Both expect the deals to close by the end of June. Hyliion, which reported a narrower-than-expected loss for 2020 in February, will likely report its second-quarter results in early August.