BetMGM is growing faster and is a better value for investors.

The online gambling business has gotten a lot of attention from investors over the past year as betting has opened up in new markets and companies like DraftKings (DKNG 0.86%), Rush Street Interactive (RSI 3.21%), and Golden Nugget Online Gaming (GNOG) have come public. The biggest is DraftKings, whose market cap is almost $25 billion, bigger than the more established MGM Resorts' (MGM 3.63%) $21 billion cap.

Legacy gambling companies are trying to keep up, but in many cases it's the nimble technology upstart that ends up dominating the brick-and-mortar incumbent. MGM Resorts is trying to buck that trend with some large and lucrative partnerships. And the strategy might just be successful. 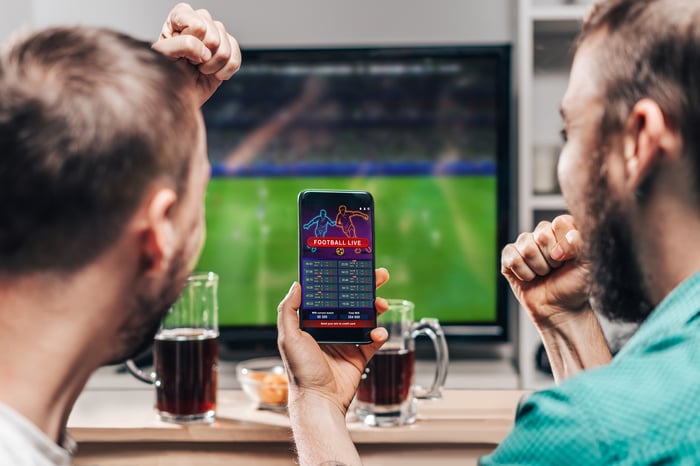 The strategy MGM Resorts is deploying is pretty simple. The BetMGM app, which is a partnership with British firm Entain, applies for an online sports betting or iGaming license in as many states as possible, and BetMGM partners with as many high-profile businesses and celebrities as it can.

The latest deal came in the form of a multiyear deal with Audacy, which recently changed its name from Entercom Communications, putting the app front and center for millions of sports radio listeners across the country.

MGM has also partnered with the NBA, MLB, NHL, MLS, NASCAR, and many more sports organizations in order to attract enough users to make the business viable. The strategy is to pay up front for big-name partners and apply that marketing to as many state markets as possible in order to grow the business. DraftKings has partnered with the NFL, UFC, individual sports teams, and even Turner Sports, but MGM has a wider partnership reach. And its bet is that will translate to more long-term growth.

The argument for DraftKings

On the flip side of the argument is that DraftKings is a pure play in online gambling and owns 100% of the business. MGM owns only 50% of BetMGM, limiting its upside in the long term.

If MGM doesn't stay focused on online gambling, it could lose out to smaller, more focused operators. But right now it's betting that the name recognition of MGM and the sheer amount of money and marketing that it's putting into the business will make it successful. But DraftKings' more focused strategy could prove to be better if customers choose its platform.

In a recent presentation to investors, management said that customer retention is over 80% and one-year revenue retention is over 100% (meaning users who stay end up making up for the lost revenue from users who leave). And the company has a highly recognizable brand, operates in more states than competitors do, and generates more revenue from online gambling than competitors. So far, the strategy is working and pure-play could end up winning out over bigger brands like MGM Resorts.

MGM is the value play

From an investment standpoint, it's BetMGM's higher growth rate and MGM's lower market cap that make me think MGM Resorts is the better buy. Let's assume that BetMGM's operations are worth the same as DraftKings' today, based on the growth rates and partnerships I highlighted above. MGM's 50% stake in BetMGM would then be worth $12.3 billion. Investors are getting all of MGM's other operations for just $6.5 billion, which is a steal given that in 2019 the company's resorts generated $3.0 billion in adjusted EBITDAR, which is a proxy for cash flow from resorts. I think that makes MGM Resorts an absolute steal compared to DraftKings.