Please ensure Javascript is enabled for purposes of website accessibility
Log In Help Join The Motley Fool
Free Article Join Over 1 Million Premium Members And Get More In-Depth Stock Guidance and Research
By Bram Berkowitz - Apr 10, 2021 at 6:06AM

SoFi earlier this year announced that it would go public through a SPAC merger. The company has high aspirations, but can it deliver?

The online lender SoFi, which will soon go public through Chamath Palihapitiya's blank-check company Social Capital Hedosophia Holdings Corp. V (IPOE), has some pretty ambitious growth plans. The company has an $8.7 billion valuation and is projecting to grow its membership and revenue at a pretty rapid rate. Does this make SoFi the growth stock for you? Let's investigate.

SoFi offers a wide array of financial products including home mortgages, student loans, personal loans, and credit cards. The company also has an online brokerage and cash management offering. Last year, SoFi purchased the fintech Galileo, a platform that helps other fintechs carry out front- and back-end functions such as account setup, account funding, and direct deposit, among other functions.

The whole idea with all of these products is for SoFi to create a "financial services productivity loop," where customers that come to the company for one product end up using SoFi for their other financial needs. The more products that a customer purchases from SoFi, the more profitable the company becomes, because there is less spend required on customer acquisition. For example, a customer that signs up for SoFi Money's cash management product and then a personal loan becomes much more profitable than with just either one, or if two different people had signed up for only one of those products. 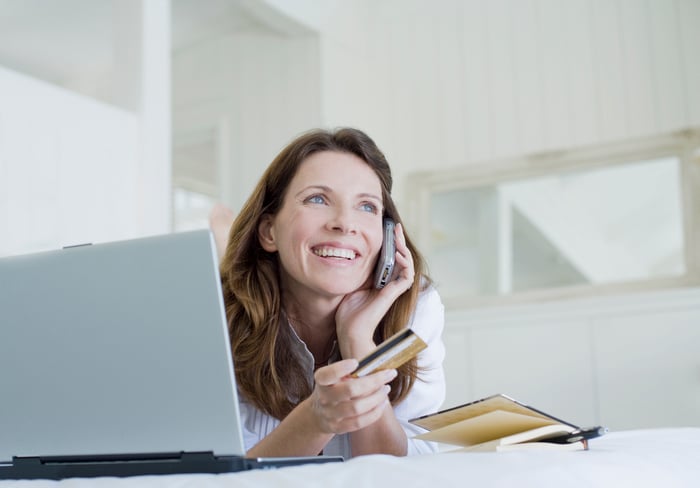 With the financial services productivity loop strategy in mind, SoFi's CEO Anthony Noto really sees two big opportunities. The first is that the top 10 legacy banks in the U.S. hold more than half of the 500 million U.S. consumer bank accounts. Noto believes the company will be able to continue to create a more differentiated product to lure these legacy bank customers over to its platform.

The other opportunity Noto sees is in regard to the other 50% of U.S. bank accounts held by smaller financial institutions. In this area, Noto sees a B2B play and believes Galileo and SoFi products can help these institutions create better products and services.

For SoFi to succeed in its strategy, it needs to grow members, show that it is cross-selling products to members, and also exhibit growth with Galileo.

In terms of membership, the company is doing well with 1.7 million members at the end of 2020 and expectations that it will grow membership to 3 million by the end of this year. The company also is seeing success in its cross-selling efforts, with 65% of its home loans coming from existing members.

Recently, SoFi announced that it plans to offer an auto loan refinancing option for its members because of customer demand and the high auto loan balances the company sees among its existing members. It's good to see that the company can roll out new products quickly considering its strategy.

SoFi has big plans for Galileo, an acquisition the company shelled out $1.2 billion for in 2020. In SoFi's regulatory filing following the announcement that it would go public, there isn't a lot of info about Galileo's growth, but I assume it has been strong in recent years, considering the platform has 59 million accounts on it and generated more than $90 million in fees through the first nine months of 2020. Clients of Galileo include other big fintechs like Robinhood, Revolut, Monzo, and Current. Galileo also plans to explore international opportunities in Latin America and Asia, so I am definitely excited by what I see with this platform, which is expected to generate more than $900 million in revenue by 2025.

Will it meet expectations?

SoFi got a pretty lofty $8.7 billion valuation, but it also has pretty lofty aspirations. The company is projecting adjusted net revenue of $3.7 billion by 2025 and earnings before interest, taxes, depreciation, and amortization (EBITDA) of $1.18 billion. SoFi also recently acquired the tiny Golden Pacific Bancorp, which will accelerate its goal of achieving a bank charter. The company expects the bank charter to significantly streamline operations and add an additional $300 million of adjusted EBITDA to the company by 2025 for total EBITDA of nearly $1.5 billion that year.

SoFi expects to first be profitable starting in 2023 and currently trades around $17 per share. Investors are going to watch how the company performs relative to its projections, but if it can hit its goals, the stock should be able to grow quickly.

Palihapitiya said during a conference call after the merger that the $8.7 billion valuation represents a 9 times price-to-earnings (P/E) multiple based on 2025 projections. But the average P/E among larger traditional banks is 11 times and the average in the financial services sector is even higher.

Not only does SoFi expect to grow much faster than your standard financial company, but with the bank charter likely in place later this year, the growth the company has demonstrated so far, and its ability to quickly roll out new products and cross-sell, I think SoFi should ultimately be able to hit its projections and be a great growth stock.