Please ensure Javascript is enabled for purposes of website accessibility
Log In Help Join The Motley Fool
Free Article Join Over 1 Million Premium Members And Get More In-Depth Stock Guidance and Research
By Rekha Khandelwal - Apr 14, 2021 at 7:14AM

The trio offer double-digit yields. But are those yields sustainable?

If you are hunting for top dividend yields, oil and gas stocks are probably high on your list. The energy sector offers some of the highest yields available right now. Three energy stocks -- MPLX (MPLX -1.43%), Sunoco (SUN -1.59%), and Antero Midstream (AM -2.74%) -- currently offer double-digit yields. Before jumping in, though, you should understand the risks associated with these stocks. Let's take a closer look at each of these to find if they can continue paying their fat dividends in the years to come.

MPLX is a logistics MLP formed by refiner Marathon Petroleum (MPC -4.75%) in 2012. Marathon Petroleum owns around 62% of MPLX's outstanding units and accounts for roughly 55% of its revenue. As its general partner, major shareholder, and top customer, Marathon Petroleum exercises significant control over MPLX's growth, which increases its risks. 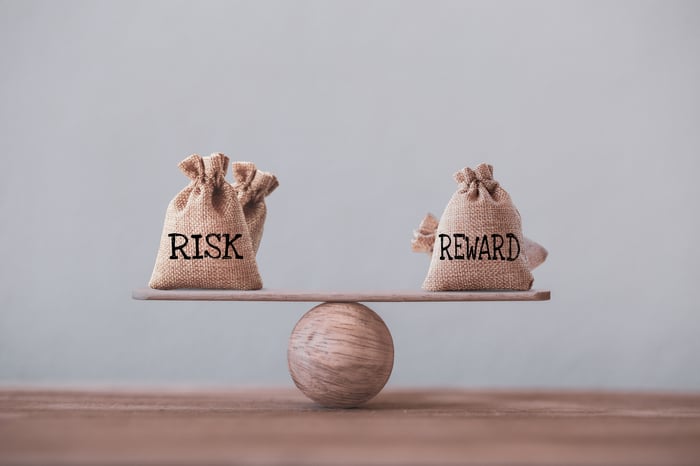 All three companies -- MPLX, Sunoco, and Antero Midstream -- recognized significant one-off charges in 2020. MPLX recognized impairment charges of roughly $3.4 billion in the first quarter of 2020 relating to its gathering and processing of assets and goodwill. These charges primarily resulted from deteriorated market conditions that affected several of MPLX's producer customers, in turn affecting expected use of MPLX's assets.

Similarly, Antero Midstream recognized $673 million in impairment charges in 2020 relating to its gathering assets due to the changed industry environment. Both MPLX and Antero Midstream reported losses for the year on a GAAP basis.

Sunoco, on the other hand, recognized an $82 million inventory adjustment charge in 2020 due to lower fuel prices. Even though the company reported growth in its adjusted EBITDA, its net income for the year fell.

Although companies may need to occasionally write down assets if there is a major change in the market environment, you should be wary of companies that recognize such charges more often than their peers. Huge impairment charges in unfavorable market conditions also indicate a company's earnings vulnerability and affect its leverage metrics.

MPLX reported a debt-to-adjusted-EBITDA ratio of 3.9 for 2020. Though that looks conservative, it changes significantly if impairment charges are considered. 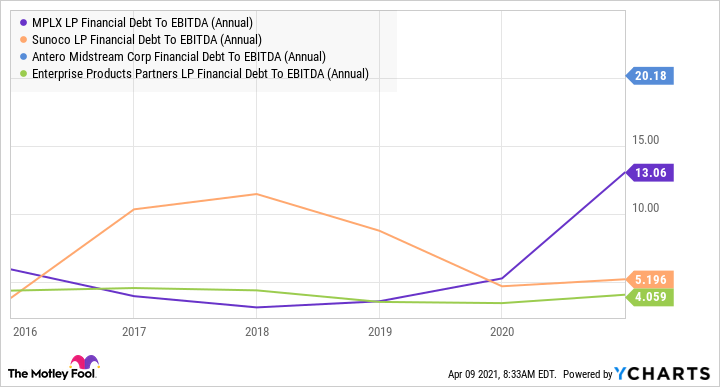 The company's debt-to-EBITDA ratio has otherwise been conservative historically, as the graph above shows.

These ratios are significantly higher than those of, say, industry bellwether Enterprise Products Partners (EPD -0.85%). All in all, you need to be aware of the risks that these adjusted numbers don't tell. If you are planning to invest in these stocks, you would do well to keep an eye on the adjustments that these companies are making to their earnings. Notably, adjusted EBITDA numbers are still useful for comparing the company's operational performance between two time periods.

Not for all investors

MPLX's high yield can largely be attributed to the above-mentioned factors, which may potentially limit its growth. However, an expected recovery in the demand for refined products will bode well for Marathon Petroleum, and in turn for MPLX. MPLX reported robust results for the year 2020. The company's adjusted EBITDA rose 2% to $5.2 billion. Distributable cash flow (DCF) was 1.46 times MPLX's distributions for the year. MPLX's strong operational performance and the positive outlook for Marathon make MPLX's high yield attractive right now.

Likewise, Sunoco's adjusted EBITDA rose 11% in 2020, despite lower volumes of fuel sold. The rise was primarily due to higher fuel margins. For the year, Sunoco's DCF was 1.5 times the distributions paid for the year. A strong footprint of terminal assets complementing Sunoco's fuel distribution network allows it to optimize storage fees. Further, bulk purchases give Sunoco substantial buying power, and a strong brand perks-up its margins.

Antero Midstream reported a 2% rise in its adjusted EBITDA in 2020. All three companies expect positive EBITDA growth in 2021.

If market conditions remain supportive, these companies can continue paying their attractive dividends. But there's a reason for the high yields on these stocks. There are other options right now in the energy sector that offer better yields on a risk-adjusted basis.