The retailer says the full-time model has worked well at its distribution centers.

Retail giant Walmart (WMT 0.60%) said in a press release today it's planning to bring its ratio of full-time employees to two-thirds, or approximately 67%, by the end of 2021. The company says this is a major increase from 53% five years ago, and over the same half-decade timespan the number of full-time workers has risen by roughly 100,000.

The company's press release also notes full-time labor already accounts for 80% of the workers at its fulfillment centers and distribution centers. The high proportion of full-time to part-time employees at these locations has proven to be a successful model, according to Walmart's statement. It also says retaining workers longer by giving them stable long-term work helps to build small teams who work efficiently together at individual locations. 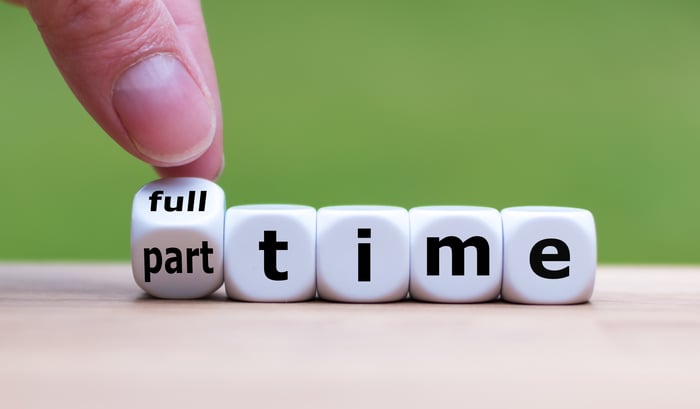 Walmart went on a major hiring binge last year to meet increased demand during the COVID-19 pandemic and lockdowns. Its profits also enabled it to accelerate branching out strongly into multiple markets and areas of business.

The company is maintaining the momentum it gained in 2020, with a fourth-quarter IPO of Indian e-commerce company Flipkart potentially giving Walmart's own stock a boost given its 77% stake in the enterprise. Walmart also owns multiple other brands that could eventually see their own IPOs, possibly boosting its whole interrelated complex of companies higher.

Even the recently announced closure of McDonald's (MCD 1.03%) restaurants inside Walmart stores can't slow the massive company down. The retailing titan is likely to bring in other restaurants or replace the departing Golden Arches with digital-only "ghost kitchens" focused exclusively on delivery, with no dine-in facilities or ordering counters at the location.