Please ensure Javascript is enabled for purposes of website accessibility
Log In Help Join The Motley Fool
Free Article Join Over 1 Million Premium Members And Get More In-Depth Stock Guidance and Research
By Jeremy Bowman - Apr 8, 2021 at 8:45AM

Flipkart is planning an initial public offering (IPO) for the fourth quarter this year.

According to Bloomberg, the leading Indian e-commerce company, which is 77% owned by Walmart (WMT -9.49%), is seeking a valuation that could top $35 billion. Based on the $16 billion Walmart paid in 2018, which valued Flipkart at $21 billion, that $35 billion price tag would represent a gain of nearly 70% in Flipkart's valuation in just three years.

Walmart had been considering taking the company public through a special purpose acquisition company (SPAC) but is opting for the more traditional IPO route. The offering is expected to be listed in the U.S., but that decision and several others are still waiting to be finalized. Still, taking Flipkart public is a smart move for Walmart for a number of reasons. Let's take a closer look at why. 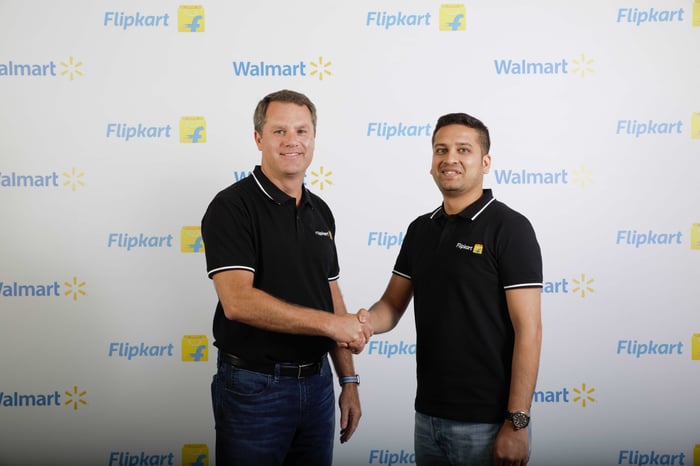 IPOs and SPACs have been flying higher in recent months as investor appetite for new issues has been incredibly strong. It's not unusual these days for debuts to double on their opening day, and foreign-based companies and e-commerce stocks have also been big winners.

Coupang, for example, a South Korean e-commerce company, jumped 41% in its IPO, and Ozon, a Russian e-commerce operator, saw a 34% pop on its first trading day. If that pattern were to hold for Flipkart, the Indian e-commerce company could be worth more than $50 billion once it's publicly traded, unlocking significant value for Walmart.

It's not just new issues that have been flying higher either as e-commerce stocks, in general, have skyrocketed during the pandemic. Take a look at some of the winners over the last year, both inside and outside the U.S, in the chart below. 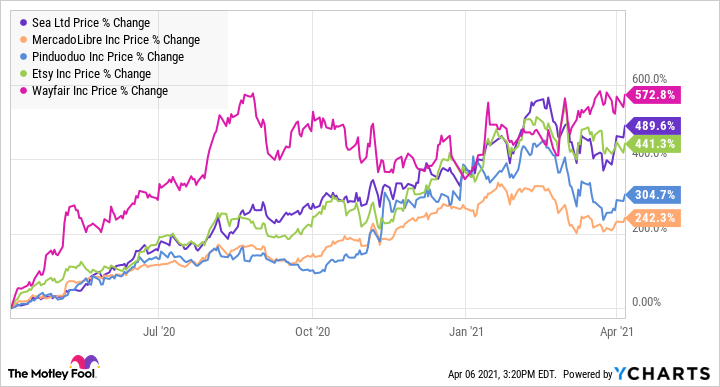 As you can see, e-commerce stocks are up by multiples since early in the pandemic, and investors have reassessed their valuations of the sector as growth in online retail has accelerated by several years because of the pandemic, and that includes in India.

Walmart is eager to reinvent its image from a stodgy brick-and-mortar retailer to a diversified company squarely focused on the future. The company has invested in areas like e-commerce and healthcare and even launched a fintech start-up. It's also reoriented its international portfolio to focus more on growth, selling off stakes in struggling markets like the U.K., Japan, Brazil, and Argentina, to focus on opportunities like Flipkart.

Given those emerging growth opportunities, there's a clear argument that Walmart is undervalued at its current price, and one of the best ways to unlock that hidden value is to take Flipkart public. By doing so, Walmart will be tying its own valuation to that of Flipkart, which is likely to do well as a publicly traded stock given the massive opportunity in India and investors' own appetite for e-commerce stocks and IPO stocks. The Flipkart IPO could even have a halo effect on the rest of Walmart's businesses, causing investors to value the company more like a growth stock, which will lead to multiple expansions. 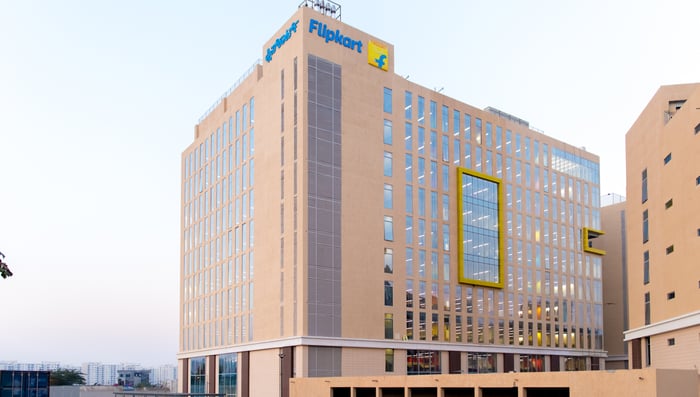 Walmart got a bonus in its Flipkart acquisition: PhonePe, the digital payments app that now has more than 100 million monthly active users and is fast becoming a "super app" used for everything from grocery delivery to travel bookings. PhonePe was partially spun off from Flipkart in December at a valuation of $5.5 billion. It looks to have a bright future, given the opportunity in digital payments and the $16 billion valuation of rival Paytm, the Indian payments app backed by Softbank and Alibaba, in its last funding round in 2019. Walmart itself is clearly excited about the opportunity in front of PhonePe, touting its growth at its recent Investor Day conference.

If the Flipkart IPO is successful, a PhonePe IPO may not be far behind, and after the spin-off from Flipkart, Walmart may already be thinking about taking it public.

It's all about unlocking value

The biggest challenge these days for Walmart related to its stock is convincing investors that it deserves more of a premium than a typical retailer would. The company has made significant investments in e-commerce and made big promises to investors in the February conference, outlining initiatives in high-margin businesses like healthcare, financial services, and advertising.

The Flipkart IPO is one way of delivering on that promise to unlock value. Even if the e-commerce company doesn't get the IPO bump that other stocks have gotten, a valuation of $35 billion would still be a win for Walmart, just three years after the acquisition. Beyond Flipkart, there are a number of other emerging areas in which investors would love to see the company execute, but taking the Indian e-commerce company public is a good start to Walmart's plan to reinvent itself.