Please ensure Javascript is enabled for purposes of website accessibility
Log In Help Join The Motley Fool
Free Article Join Over 1 Million Premium Members And Get More In-Depth Stock Guidance and Research
By Anthony Di Pizio - Apr 14, 2021 at 8:07AM

In a perfect environment, the leader in food delivery still can't find earnings.

The COVID pandemic unlocked a fountain of growth for many emerging technologies. DoorDash (DASH 10.23%) was a clear beneficiary of economic lockdowns that triggered a boom in the food delivery industry. Despite this powerful tailwind, the company still failed to deliver positive earnings amid additional expenditure on key line items like marketing. As the pandemic fades and consumers return to restaurants, DoorDash may have missed its opportunity. 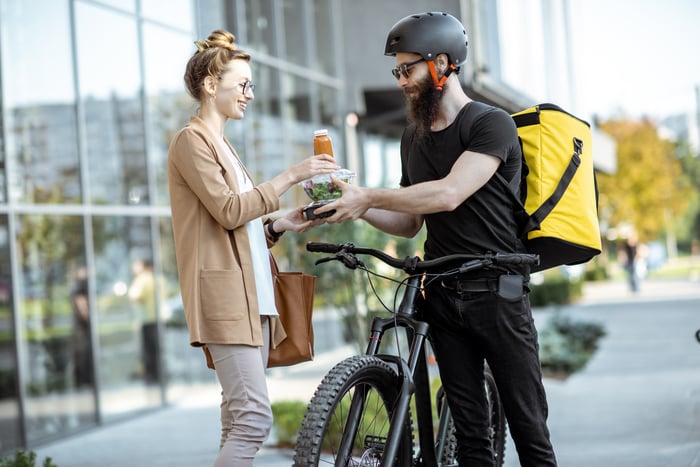 DoorDash makes the bulk of its revenue by taking a percentage of restaurant sales on its platform. It reports these sales as "marketplace gross order value," or GOV, in its financials, which totaled $24.66 billion in 2020 — a 326% increase over 2019. Put simply, it's the total amount of money that DoorDash users paid for food.

DoorDash now projects marketplace GOV in 2021 in the range of $30 billion to $33 billion, which is a substantial deceleration in growth rate. More importantly, it would still leave the company with a sizable operating loss assuming costs scaled higher in similar fashion to 2020. But global economies are opening further, with less people staying home and using food delivery, so the question is whether the DoorDash marketplace will grow at all this year.

DoorDash is new to the public markets, having only listed in December 2020. The company's eyebrow-raising $29 billion valuation was widely discussed, and rather perplexing — one Forbes contributor even compared it to the controversial proposed public offering of WeWork! DoorDash had only ever delivered one quarter of positive earnings in its history, a mere $23 million — but nonetheless, the stock proceeded to more than double in its first two months on the market.

Despite a record 2020 that more than quadrupled the company's revenues, it is becoming increasingly obvious that DoorDash could struggle to become consistently profitable. It appears DoorDash's growth in costs tracked closely with growth in revenue, in dollar terms,leading to net losses that only marginally improved. So far, the company has struggled to make enough profit on each extra dollar of revenue to offset growing expenses, which also implies it could struggle to scale -- but it's a question of how big the food delivery market can get from here!

If you could see the future of a loss-making company, and you knew it would do four times more business as the previous year, you might envision a pretty rosy picture. Therefore, it would be quite a shock if the company simply managed to lose just 29% less money. That's what happened here, though.

A fight for survival

The stay-at-home economy was prime time for a business like DoorDash, which filled an important gap in consumer needs. Its food delivery service sells convenience, but in 2020, it was essential to the survival of many restaurants and families who were stuck at home. If the company can't deliver earnings in an environment tailored to their service, it could be a sign that its business model will struggle to be commercially viable long-term.

The food delivery industry is extremely competitive, and as a stand-alone service, DoorDash is competing against its biggest rival by market share, Uber Eats, which has all the resources of its rideshare parent, Uber Technologies Inc (UBER 5.53%). DoorDash holds an advantage with 55% of the US market, but both Uber Eats (at 21%) and GrubHub (GRUB) (at 16%) have made aggressive acquisitions to help them climb the ladder. Both of these competitors have similar product offerings that pose a direct threat to the company's leadership position.

Uber Eats has the largest global footprint in the industry, with a higher overall gross order value that hit record levels in 2020, yet that company still fails to generate positive earnings. GrubHub isn't immune to this dynamic, either. Despite climbing revenues, it lost eight times more money in 2020 versus 2019. These are signs of clear flaws in the overall business model, which might be solved by innovation -- but with so much competitive pressure, its ability to build an edge remains really uncertain.

It's clear that DoorDash has no issue generating revenue. Now it needs to find a way to boost operating margins by cutting costs or raising prices. If there is a deceleration in gross order value this year, it's going to spell trouble for the company's earnings prospects going forward, and it will look as if DoorDash missed a golden chance to deliver in 2020.