Scooping up shares of this cannabis underdog right now would be like catching a falling knife.

Back in February, Sundial Growers (SNDL 2.02%) became a popular get-rich-quick cannabis stock after traders from the now legendary WallStreetBets subreddit forum took an interest in its shares. After all, who doesn't love the story of a company that's in deep trouble but has high hopes of turning it all around?

As it turns out, Sundial went nearly all-in with its capital to invest in a market that never quite materialized. Bad news came for shareholders who didn't cash out in time, as the stock is now down nearly 70% from its February highs. Is there any hope left for those still holding on, or are maybe thinking about buying the dip? 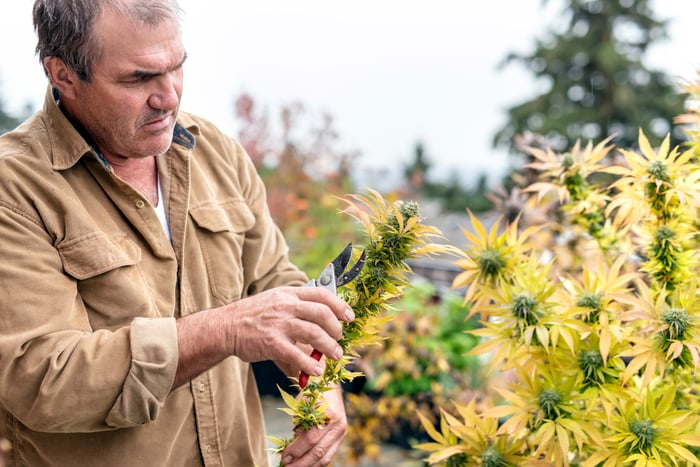 Sudden jumps in stock price present huge opportunities for management, as they can quickly close equity offerings at higher (and often inflated) prices for easy access to cash. And Sundial Growers took full advantage. Back in July 2020, the company only had about 100 million shares outstanding. As of March 2021, Sundial now has an astonishing 1.66 billion shares outstanding.

The good news is that the company paid back all of its debt with the new capital and is still left with 719 million Canadian dollars in cash. The bad news, however, is that nobody really liked Sundial's pot in the first place. In fact, its market share in Canada dropped to 2.7% in the fourth quarter of 2020 from 3.5% in the prior quarter. Sundial was forced to discontinue over 60 cannabis products. It has about 40 remaining.

More likely than not, the company will see its cash pile dwindle through its operations. For starters, the company's net revenue declined by 4.2% year over year to CA$60.9 million. This came at a time when just about every single cannabis company saw its sales skyrocket, even after the disruptions caused by the COVID-19 pandemic. Statistics Canada estimates that total revenue of legal cannabis producers doubled from 2019 to 2020, reaching about CA$800 million per quarter.

If we were to multiply the average selling price of Sundial's pot by the amount it harvested, this yields about CA$115.8 million in gross revenue, which is far less than the CA$73.3 million it had in 2020. The discrepancy indicates that the company sells far less cannabis than it harvests -- just 60% of what it gathers.  That's problematic, as Sundial invested in three state-of-the-art facilities across Canada, envisioning massive production by the end of last year. But since consumer demand never took off as expected, Sundial realized staggering losses.

In 2020, it had to write off tens of millions of dollars in obsolete inventory, resulting in a negative gross profit of CA$49.9 million compared to a gain of CA$36.5 million in 2019. Its operating loss accelerated to CA$185.4 million from CA$52.73 million during the same period. This was driven by asset impairments, restructuring, and contract cancellations with existing clients. On top of that, the company paid about $20 million in costs for its mega-financing streak.

Instead of focusing on cleaning up its operations, Sundial is instead using its new capital for -- you guessed it -- financing. In December, the company lent CA$58.9 million to pot grower Zenabis Global. This February, it announced a CA$22 million investment in edibles company Indiva. Both companies are trading as penny stocks.

Sundial is investing CA$100 million in a joint venture with Canadian private equity group SAF to make up for its lack of international pot operations. The two will jointly finance cannabis operations in Canada and abroad over the next few years. However, without a track record of success at home, it's tough to convince investors that these deals will create wealth.

Even after a dramatic sell-off, Sundial stock is still trading at a mind-boggling 30 times revenue. With declining sales, accelerating losses, massive share dilutions, lackluster brand quality, and no international segment, this is probably the No. 1 marijuana stock to avoid right now.