Please ensure Javascript is enabled for purposes of website accessibility
Log In Help Join The Motley Fool
Free Article Join Over 1 Million Premium Members And Get More In-Depth Stock Guidance and Research
By Adria Cimino - Apr 17, 2021 at 6:00AM

They're among the top 10 holdings in one of Ark Invest's biggest funds.

When Cathie Wood talks, investors listen. And for good reason. The founder of Ark Invest has successfully predicted stock market stars -- one of her top holdings is Tesla. Shares of the electric-vehicle maker have soared more than 400% over the past year. And Wood's funds have scored winning results -- ARK's five biggest funds each delivered triple-digit percentage gains over the past three years.

Now, here's some great news for all of us who want to follow this investment superstar's lead: Right now, you can buy three of the biggest holdings in her Ark Genomic Revolution ETF at a bargain. Let's take a look at the innovative players that would make excellent additions to any long-term healthcare portfolio. 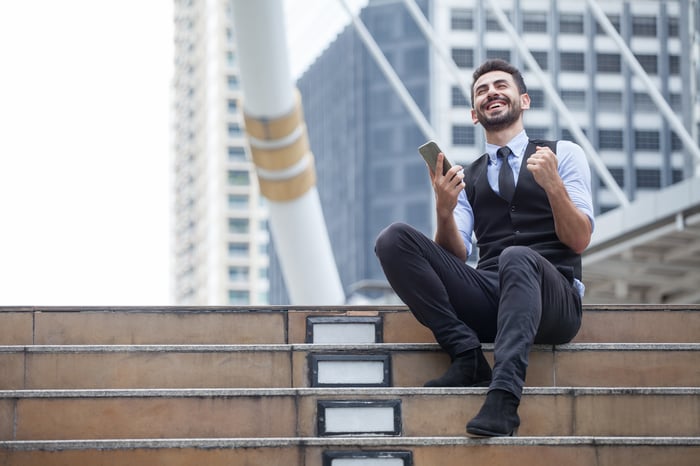 Ark Genomic Revolution's biggest bet is on Teladoc Health (TDOC 11.43%). The telemedicine company -- at 7.44% -- is the most heavily weighted share in the fund. Teladoc soared to a record high earlier this year. But here's our buying opportunity: The stock has declined 34% from that point.

Teladoc offers virtual medical visits in more than 175 countries and has about 51.5 million members. Visits have increased in the triple digits over the past three quarters. As you can imagine, the pandemic gave business an extra boost last year as people opted to stay home as much as possible. For the full year, revenue climbed 98% year over year to more than $1 billion. And total visits increased 156% to more than 10 million.

I expect Teladoc's strength to continue post-pandemic. Even as the crisis eased in the later part of the year, revenue continued to climb. It rose 145% in the fourth quarter ended Dec. 31. And Teladoc's acquisition of Livongo adds the growing field of digital management of chronic conditions. So Teladoc still is in the early stages of its growth story -- a perfect time for investors to jump on board.

But what really has pushed Regeneron into the limelight over the past several months is its antibody cocktail to treat mild to moderate cases of COVID-19. The U.S. Food and Drug Administration granted the company Emergency Use Authorization in late November.

Before the authorization, Morningstar predicted Regeneron could reach $6 billion in sales of the cocktail in 2021. So far, adoption of the treatment has faced a challenge though: It must be given by infusion in a healthcare setting. But here's some good news: Regeneron is investigating the cocktail as a subcutaneous injection. The company recently announced positive results from two phase 3 trials using subcutaneous delivery. This makes treatment easier and quicker -- for patients and healthcare facilities. So, an authorization of this delivery method could significantly increase adoption.

Regeneron shares are trading at about 10.8 times forward earnings estimates. That's lower than the average of more than 16 over the past year. And that offers us a solid buying opportunity.

Vertex Pharmaceuticals (VRTX 0.58%) is ARK Genomic Revolution's seventh-biggest position. This biotech stock has delivered a more than 171% gain over five years. But last year shares slid after the company halted an alpha-1 antitrypsin deficiency candidate -- and they've struggled since. (Vertex continues development of a second candidate for this inherited disorder affecting the lungs and liver.) 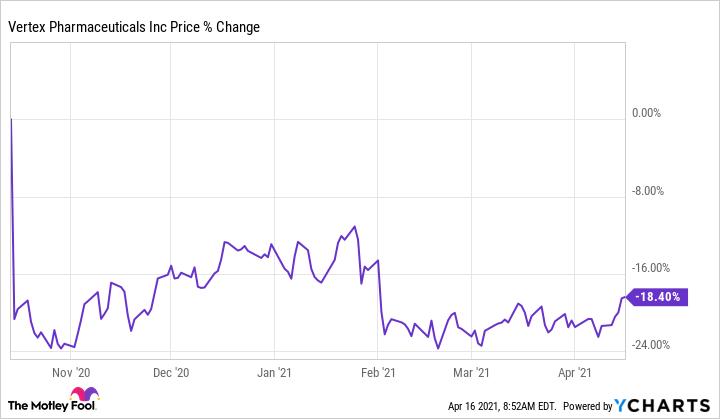 Why the concern? After all, Vertex generates billions of dollars annually as a leader in the cystic fibrosis (CF) market. But some investors worry about growth drivers down the road. Here's why I'm not worried. Vertex expects its CF leadership to last until at least the late 2030s. And Vertex's CF business still is growing. The FDA approved new treatment Trikafta in 2019. The drug quickly became a blockbuster -- and sales growth continues as Vertex rolls out the treatment in various countries and age groups.

Looking to the future, good news is multiplying: Vertex and partner CRISPR Therapeutics are making progress in their gene editing therapy program for blood disorders. The 10 patients treated so far responded well, meeting goals such as remaining transfusion independent. In other news, the FDA recently granted Vertex fast-track designation for its type 1 diabetes cell therapy candidate.

Right now, Vertex trades at about 19.7 times forward earnings estimates. That's down from more than 29 last summer. So, considering today's growth and possible products down the road, now is a good time to scoop up shares of this Cathie Wood favorite.