Please ensure Javascript is enabled for purposes of website accessibility
Log In Help Join The Motley Fool
Free Article Join Over 1 Million Premium Members And Get More In-Depth Stock Guidance and Research
By Will Healy - Apr 18, 2021 at 7:45AM

Intuit now faces a possible threat from an unexpected source.

Intuit (INTU 0.74%) has long served as the standard for accounting and tax software. It built a name for itself in the 1990s by fending off a challenge from Microsoft. While Intuit has spent its history successfully fighting off other competitive challenges, a threat from an unexpected source could call the stock's value proposition into question.

Intuit has been an integral part of the financial ecosystem for some time. With both TurboTax and QuickBooks, and more recently with Mint and Credit Karma, Intuit has made itself a leading financial software company for both consumers and businesses.

Indeed, all of its products have attracted competitors, and many cost less than Intuit's products. Enterprises stick to QuickBooks because it took an early lead in the industry. As it keeps adapting and expanding its capabilities, most companies lack any incentive to change. InfoClutch estimates a market share of about 80% for QuickBooks. 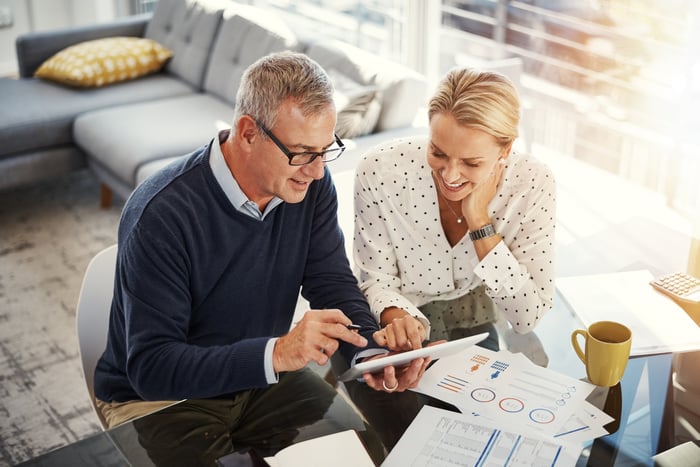 TurboTax stays ahead with capabilities and an easy-to-use interface that helps it stand out against lower-cost peers. TurboTax held a market share of 67% in 2019, according to ProPublica's analysis of IRS tax filing data.

Intuit sidestepped another competitive challenge by purchasing Credit Karma in 2020. However, to get that deal past antitrust regulators, it had to allow Square (SQ 3.97%) to buy Credit Karma Tax. This makes Square a direct competitor of Intuit's TurboTax, even though Square and Intuit have maintained an alliance, linking their software since 2013.

However, in 2013 Square did not have the extensive financial ecosystem it has developed today. Moreover, Intuit built its moat by linking to the existing financial infrastructure. With Square developing a one-stop-shop for all things finance, financial management software could become one part of that ecosystem. While that does not mean Square would freeze Intuit out, it means that Intuit could lose its market power as Square's ecosystem grows in influence.

Admittedly, the pandemic has likely become an immediate focus for Intuit. For the first six months of fiscal 2021, revenue increased by only 1%, due in large part to business slowdowns related to COVID-19. Although Intuit generally kept operating costs in check, merger costs led to a 37% increase in general and administrative expenses. Consequently, overall operating expenses rose by 5%. This led to net income for the first six months of the year falling to $218 million, a drop of 27% compared with the first half of fiscal 2020.

Despite lower net income, Intuit improved its balance sheet. The company generated $253 million in free cash flow. However, its cash position fell to just under $2 billion, down from over $6.4 billion one year ago. During that time, Intuit paid off more than $1 billion in short-term debt and spent over $3 billion on acquisitions, likely part of the $8.1 billion cost of the Credit Karma purchase.

Also, like many fintech stocks, Intuit stock price surged significantly, rising by about 66% in the last 12 months. 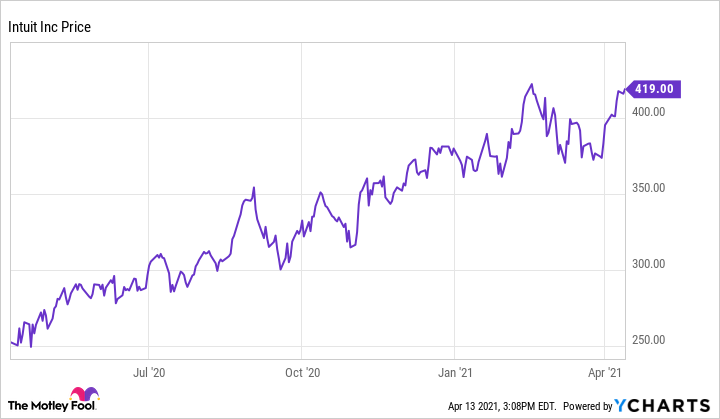 This has taken its P/E ratio to just above 63, well below Square's, which is over 700, and even PayPal's multiple of about 78. Nonetheless, the current valuation may not seem like a bargain. Intuit's P/E ratio has typically ranged from 35 to 50 for most of the last five years, well below current levels.

Should I buy Intuit?

Intuit has built a moat centered around accounting and tax software, and it has so far kept its challengers at bay. However, Square presents its most significant competitive threat in decades.

Square may or may not challenge Intuit directly, and Intuit has historically thrived against tough competition. However, with the P/E ratio at multi-year highs and Square presenting a credible threat to its moat, investors will likely see higher returns in other fintech stocks.