Please ensure Javascript is enabled for purposes of website accessibility
Log In Help Join The Motley Fool
Free Article Join Over 1 Million Premium Members And Get More In-Depth Stock Guidance and Research
By Evan Niu, CFA - Apr 18, 2021 at 11:00AM

Long-term investors focusing on the next three to five years and confident in Lucid's ability to execute are looking at bargain prices.

It's been a brutal couple of months for special-purpose acquisition companies (SPACs), which have been selling off broadly as investors shun speculative growth stocks with lofty valuations in favor of safer investments. The pullback has hit electric vehicle (EV) SPACs particularly hard, since the EV revolution remains in the early innings and much of the expected growth is in the distant future.

It didn't help that President Biden's infrastructure plan that will encourage EV adoption was a bit lacking in concrete details, creating more uncertainty and testing the patience of investors. The turmoil has created buying opportunities for long-term investors, particularly for the relatively more mature EV start-ups that have the greatest potential. Here's why Churchill Capital IV (CCIV), which is merging with Lucid Motors, is a screaming buy at $20. 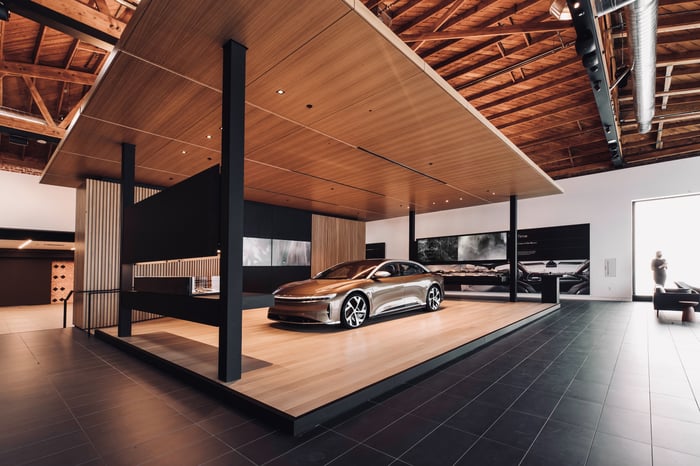 Closer to the PIPE

For the first time since confirming the merger in February, Churchill Capital IV shares dipped below $20 on Friday. Recall that the PIPE (private investment in public equity) investors committed to buying in at $15, an unprecedented arrangement due to the extenuating circumstances surrounding the deal following a month of rampant speculation. At $20, this is the closest that public investors have gotten (so far) to being able to invest alongside institutional heavyweights like BlackRock and Fidelity, among others.

As part of the deal, those PIPE investors also agreed to a lock-up provision that prevents them from selling shares until either Sept. 1. With the de-SPAC transaction expected to close during the second quarter, shares will trade as Lucid Motors for a few months before that lock-up expiration. As we enter the second half of 2021, investors will be closely watching the start of Air deliveries.

It's also worth remembering that the SPAC sponsor has committed to an even longer lock-up period of 18 months. Churchill Capital and its operating team, which notably includes former Ford CEO Alan Mulally, are committed as long-term investors that want to add as much value as possible by offering advice from its stable of industry veterans. In fact, Lucid's decision to delay Air deliveries from the spring to the second half was made based on feedback from Mulally, and the legendary auto exec's input will also be invaluable as Lucid ramps manufacturing operations.

Being greedy when others are fearful

Generally speaking, companies within the same sector tend to trade in correlation with each other, for better or for worse. It's true that many EV SPAC stocks are incredibly speculative and that some will inevitably fail. To be clear, there have been numerous controversies among EV SPACs, such as Nikola's scandal around fraud allegations or Canoo's pivot to an entirely different business model.

Those episodes have justifiably shaken investor confidence in the space, but long-term investors can benefit from company-specific fears that are contributing to a sector-wide sell-off but don't apply to other companies. Unlike Nikola, Lucid's vehicle can propel itself without the assistance of gravity. Unlike Canoo, Lucid has a clear vision and go-to-market strategy and is imminently about to start executing on said strategy.

The decline has also brought the stock's valuation back down meaningfully. There will be an estimated 1.6 billion shares outstanding after the deal closes, translating into an implied market cap of $32 billion at $20 per share. That means Churchill Capital IV shares are trading at approximately 14.5 times 2022 estimated revenue of $2.2 billion -- almost exactly Tesla's forward sales multiple right now.

Investing in Churchill Capital IV and Lucid Motors for the long-term should be about the EV maker's execution over the next three to five years, not about near-term volatility over the next several months. Investors that have confidence in Lucid's ability to ramp manufacturing and deliveries -- with revenue forecast to reach $10 billion in 2024 and $23 billion in 2026 -- should be scooping up shares right now.