Please ensure Javascript is enabled for purposes of website accessibility
Log In Help Join The Motley Fool
Free Article Join Over 1 Million Premium Members And Get More In-Depth Stock Guidance and Research
By Daniel Foelber - Jul 22, 2021 at 7:01AM

Lucid is raising a ton of cash from its merger with Churchill Capital, but needs to be careful with how it prioritizes spending.

The highly anticipated merger of Lucid Motors with the SPAC Churchill Capital IV (CCIV) is right around the corner. On July 13, Lucid gave an investor presentation that confirmed a vote will be held this Thursday, July 22. If it passes, Churchill Capital will delist from the NYSE, and the newly merged company will be listed on the Nasdaq under the ticker LCID.

Let's discuss key updates from the company's presentation last week to determine if Lucid Motors is a buy right now. 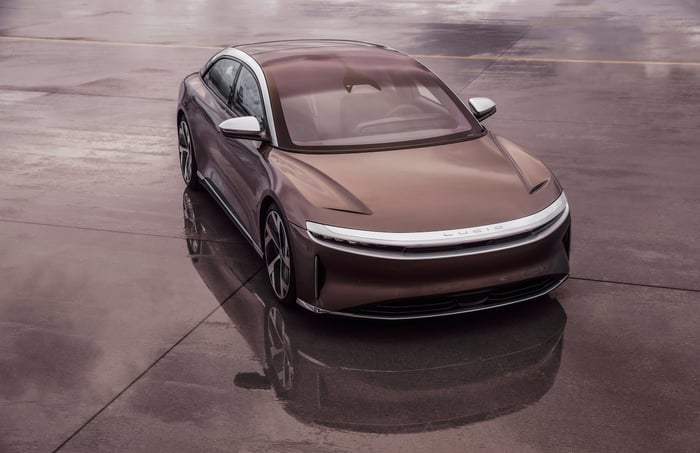 Through its merger with Churchill Capital IV, Lucid Motors will receive $4.4 billion in cash net expenses that it can use to scale its luxury electric vehicle (EV) and renewable energy business. It expects it can use its existing cash resources to fund its business operations through at least next year.

The company wants to scale production and develop new technology as quickly as possible. In an effort to do that, it's shifting an additional $350 million in spending forward to 2021 to 2023. It also plans to increase annual capital expenditures (capex) by 6% to 7% between 2021 and 2026.

Higher spending will help the company expand manufacturing capacity, roll out its luxury SUV (the Lucid Gravity) by the end of 2023, and vertically integrate certain manufacturing functions. The big takeaway was that Lucid now plans to combine the next two phases of its manufacturing expansion into one expedited phase.

Its Advanced Manufacturing Plant 1 (AMP-1) in Casa Grande, AZ currently has a capacity of 34,000 units per year. Phase two was set to increase capacity to 90,000 units per year, with phases three and four bringing the total capacity to 1,000 vehicles per day. By completing phases two and three ahead of schedule, the company now estimates it can add 2.7 million square feet of manufacturing space, thereby increasing capacity to 53,000 Lucid Air vehicles by 2023. It is also making adjustments so that it can produce both the Lucid Air and the Lucid Gravity from the same production lines.

On the surface, demand for Lucid's vehicles seems adequate. But demand will need to grow much more to justify the company's plans to produce 20,000 cars next year.

What follows is a bit of guesswork as to the exact number of Lucid Air Dream Editions and Grand Tourings (the second-most-expensive trim) that have been reserved. Regardless of where the figure stands today, investors should keep an eye on the company's ability to reserve its higher cost cars so that it can fill demand when it ramps production next year.

During the company's July 13 presentation, Lucid announced the opening of two new retail locations, bringing its total count to eight. Additionally, there are seven retail stores under construction and in development. Upon completion, seven of the 15 stores will be in California, two will be in Florida, and two in New York, and Illinois, Massachusetts, Virginia, and Arizona will each have one store. All told, Lucid plans to open more than 20 retail and service locations by the end of the year.

Lucid's plan is to draw in potential buyers through both its website and the in-person stores, while also relying on positive press and word-of-mouth. Lucid noted that most of its reservations are coming from the website, as the company has worked hard to make the experience as interactive as possible. But like most big-ticket items, people like to see and touch what they are buying in person.

Putting the cart before the horse

Lucid seems to be doing an OK job of handling the three-legged stool of technology, manufacturing, and sales/marketing. That being said, it could be argued that management is still spending a little too much time talking about the bells and whistles of the car. Like its February and May presentations, the July presentation hammered home concepts like "post-luxury" versus "traditional luxury," how Lucid embodies "California cool," and other intangibles. While the company deserves credit for its attention to detail and design, the thing that matters most right now is producing a car that justifies its high price tag, not getting overly googly with marketing buzzwords.

There's no doubt that Lucid Motors has the potential to be a millionaire-maker EV Stock. The company has set some aggressive sales and profitability targets, including positive gross profit in 2022, positive EBITDA in 2024, and positive net income in 2025. While these numbers certainly shouldn't be taken for granted, they illustrate the company's vision of what could be if all goes according to plan. But at this stage, it seems like Lucid's marketing and investments are getting a little ahead of its production. Technically, the company is still on track to reach its deadline to begin delivering cars later this year. But it should be careful to prioritize spending in a way that lets it get closer to profitability, not start a bad habit of delays.