Please ensure Javascript is enabled for purposes of website accessibility
Log In Help Join The Motley Fool
Free Article Join Over 1 Million Premium Members And Get More In-Depth Stock Guidance and Research
By Daniel Foelber - Jul 21, 2021 at 8:00AM

This electric vehicle company prefers to invest in battery efficiency and technology, and worry less about charging infrastructure.

The management team at Lucid Motors, a luxury electric vehicle (EV) company, provided a few updates during the company's July investor presentation, as well as expanding upon technology and spending plans the team is considering. Lucid still intends to begin mass production and delivery of its sedan, the Lucid Air Dream Edition, sometime in 2021. But the company failed to set a definitive date for its release. This uncertainty, along with the company's accelerated spending, could be among the reasons why the share price of Churchill Capital IV (CCIV), a special purpose acquisition company (SPAC) that Lucid plans to merge with on Friday, July 23, fell over 10% last week. 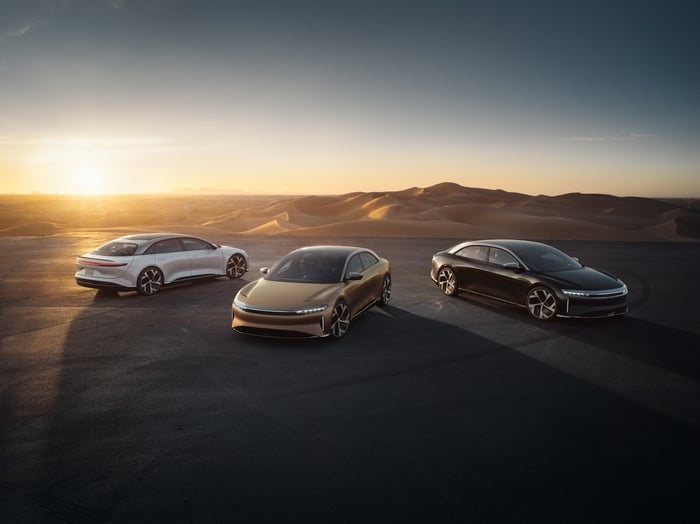 There were a few positives to glean from the presentation as well. Lucid is investing heavily in efforts to extend vehicle range and improve fast charging. Management said it remains confident that high upfront research and development costs will save the company money down the road.

Let's break down the company's spending plan and battery technology news to better understand why it believes it doesn't have to focus as much on developing its own charging network.

Lucid Motors CEO Peter Rawlinson said he believes the company has what he calls a "second-mover advantage" over competitors like Tesla (TSLA -6.63%). Specifically, he means that Lucid doesn't have to build its own charging network, and can focus all of its efforts on extending the range and shortening charge time.

The past couple of years have seen an influx of private and public investment to support a growing number of EVs on the road. Notable examples include ChargePoint (CHPT 1.13%) and Electrify America. ChargePoint has an entrenched position in Level 2 charging, and it is expanding in DC fast charging as well. Last week Electrify America announced it would double the size of its current network by 2025, bringing its total number of charging locations to 1,700 with an average of five or six chargers per station location.

To mitigate range anxiety, early innovators like Tesla were pressured to build their own charging infrastructure to give drivers confidence that they could travel cross-country. As a newer company that's scaling in the 2020s instead of the 2010s, Lucid lacks a first-mover's advantage, but benefits from a more mature EV support network. "Although we're going vertically integrated in terms of sales, service, and manufacturing, we don't need to invest into a fast-charging network," said Lucid Motors CEO Peter Rawlinson during the company's July 2021 investor presentation. "And actually, we can use the next-generation technology."

What Rawlinson means by "next-generation technology" is that today's public chargers are actually comparable to Tesla's existing superchargers. Lucid's Wunderbox bidirectional battery pack, along with the 900-volt system, allows it to receive and discharge power while also charging via AC and DC. According to Lucid, the Wunderbox can achieve a charge rate of 19.2 kilowatts (kW) at home with a Level 2 charger -- roughly 70 miles of charge per hour of charging. From a fast-charging DC system, the car can charge at a rate between 300 kW and 350 kW, or about 20 miles of charge for each minute charging.

The versatility is nice, but it's not the most important part of Lucid's strategy. Rather, the company's real objective is to have the best range and performance. The fully reserved Lucid Air Dream Edition has an EPA-rated range of 503 miles and 1,080 horsepower. The least expensive trim, the Lucid Pure, is expected to have a range of over 400 miles.

Rawlinson has repeatedly stressed that he thinks the single most important EV metric is efficiency as measured by miles per kWh. Lucid is the self-proclaimed leader in this field, with a miles/kWh battery efficiency greater than 4.5. It's not a complicated strategy. More range means less need to charge in public or during road trips. And when you do have to charge, you can make it as quick and easy as possible.

Lucid is safeguarding its proprietary technology and remains focused on its product and manufacturing efficiency. The company's integrated powertrain is built entirely in-house, which is costing a lot of money before Lucid can even begin to generate sales. But Lucid's edge over the competition is its technology, so it makes sense that it's investing in that over ancillary projects like its own charging network.

Like most growth companies, Lucid Motors has a lot of great ideas, but it needs to translate its innovation into measurable results. Until that happens, the company will likely remain speculative and volatile, but it could be a good long-term buy for investors willing to be patient and give the story a few years to play out.