Please ensure Javascript is enabled for purposes of website accessibility
Log In Help Join The Motley Fool
Free Article Join Over 1 Million Premium Members And Get More In-Depth Stock Guidance and Research
By Alex Carchidi - Apr 20, 2021 at 6:12AM

The best part is that they're already prospering without ever selling a single gram of marijuana.

Cannabis is becoming synonymous with big business, but that doesn't mean it's easy to make money as an investor. Where there's an industry that's growing rapidly, there's sure to be inefficiency around every corner. And while that might be par for the course, it also means that it's a challenge to find the right stock to buy, because so many of the contenders are still finding their footing for the first time.

All of the stocks I'll discuss today have one big advantage: They can grow alongside the cannabis industry without being directly exposed to the risks of shifting consumer preferences or variations in the market price of marijuana. That means when direct-to-consumer (DTC) companies are busy competing with each other by futzing with their branding, their product offerings, and their retail footprints, it simply won't matter to your portfolio. Plus, these three stocks stand to gain from the long-term maturing of the industry as a whole -- and that makes them lucrative picks today. 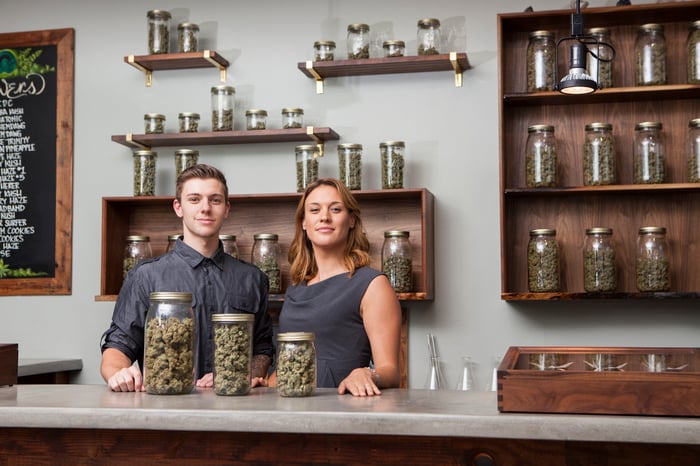 When you're not sure exactly what company to invest in within a given industry, sometimes it's a good option to buy a bundle in an ETF. That's where AdvisorShares Pure US Cannabis ETF (MSOS 3.85%) could come in handy. The fund holds a basket of different cannabis stocks, which it defines as companies that earn a minimum of half their net revenue from cannabis or hemp in the U.S. Up to 25% of its holdings are targeted at the biotechnology segment of the cannabis market, leaving the majority invested in the medicinal and adult-use segments.

Especially as the federal legalization of marijuana becomes more likely in the U.S., it's easy to see how this ETF has a strong tailwind driving its growth in the short term, not to mention longer-term expansion from the industry's maturation. But investors should remember that they won't get exposure to juicy Canadian marijuana companies with this ETF, so buying a few stocks on the side might be worthwhile too.

I'm a fan of Innovative Industrial Properties (IIPR -1.07%) because its business model is to perform sale-leasebacks to medicinal cannabis cultivators. In a nutshell, it buys marijuana growing facility space from smaller companies, then rents it back to them. So Innovative Industrial essentially trades cash to cash-starved marijuana businesses in exchange for a steady flow of income that it then uses to accumulate more cash and repeat the process somewhere else. And it pays a tidy dividend that currently yields around 2.65%.

As far as cannabis stocks go, Innovative Industrial Properties' performance metrics and financials look good at a glance. That's in stark contrast to other companies in the industry, which are often more prone to make investors cringe than swoon. It's assuredly in the black, with a profit margin of more than 56%, and its quarterly revenue is growing by almost 110% year over year. At the same time, its quarterly earnings are increasing by 115.4% year over year -- and all of that without taking on much debt relative to its $126.01 million in cash on hand.

This year, the company has acquired four new properties in the U.S. and expanded a slew of its tenant relationships, all while maintaining a 100% lease rate for its assets. Especially if you're bullish on the cannabis industry in the long term, it's hard to find a better marijuana stock to buy.

Much like Innovative Industrial Properties, GrowGeneration (GRWG -3.97%) doesn't sell cannabis directly. Instead, it sells hydroponics equipment, plant food, grow lights, and environmental controls, all of which are tailored directly to the needs of marijuana cultivators. Thanks to careful strategic positioning of the company's retail warehouses in budding cannabis industry hot spots, business is booming, and in 2020 GrowGeneration sold a whopping $193 million in goods, 143% more than it did in 2019. Last year, it also opened 14 new stores, increasing its total footprint to 52 locations in 12 states.

Moving forward, GrowGeneration is looking to deepen its ties to cannabis businesses by handling their upstream logistics directly. And 60% of its revenue is derived from consumable products like nutrients and plant propagation kits, meaning that its intake is largely recurring revenue over time. As it establishes its geographical presence around the U.S. and gets companies to depend on it for their monthly supply of consumables, it'll become increasingly entrenched and even more profitable. In other words, this company is worth investing in while it's still expanding its footprint.

Alex Carchidi has no position in any of the stocks mentioned. The Motley Fool owns shares of and recommends GrowGeneration Corp and Innovative Industrial Properties. The Motley Fool has a disclosure policy.