Please ensure Javascript is enabled for purposes of website accessibility
Log In Help Join The Motley Fool
Free Article Join Over 1 Million Premium Members And Get More In-Depth Stock Guidance and Research
By Adria Cimino - Apr 21, 2021 at 6:30AM

A big market is in big need of more vaccines.

Most of the time, it's best to be among the first to market with a new product. These companies have the chance to quickly gain market share. And if they do things right -- keep it.

But there are times when a late entry is just fine or even preferable. That's the case right now for CureVac (CVAC 6.17%). The biotech company expects to report data from phase 3 studies of its coronavirus vaccine candidate in the coming weeks. And CEO Franz-Werner Haas said in a CNBC interview that he expects European authorization in early June. Let's take a look at why the company has a chance at gaining significant market share there. 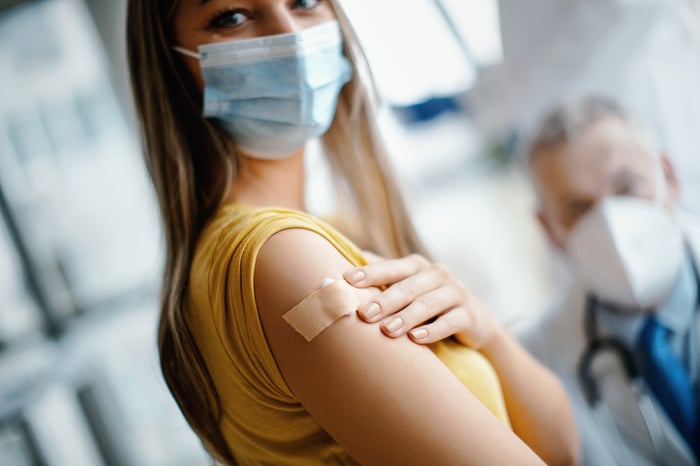 1. The Woes of Rivals

The troubles of rivals AstraZeneca (AZN 1.50%) and Johnson & Johnson (JNJ 0.09%) offer CureVac an opportunity to become a leader in Europe. Several European countries temporarily suspended use of the AstraZeneca vaccine last month after some vaccinated individuals developed blood clots. Since, most countries have resumed AstraZeneca vaccinations -- but have limited use to certain age groups.

As for J&J, it's delaying its vaccine launch in Europe. That's as U.S. regulators study cases of rare blood clots in some individuals who received its vaccine. And here's the worst news for J&J and AstraZeneca: Italian newspaper La Stampa reported the European Commission wouldn't renew vaccine contracts with both companies next year.

At the same time, Europe's vaccination rollout has fallen behind. For example, only 18% of European Union residents have received at least one dose of a coronavirus vaccine. That compares to about 40% of U.S. residents. And residents of many European countries -- such has France -- are struggling to secure vaccine appointments because of supply shortages.

CureVac already signed an advance purchase agreement with the European Commission for 225 million doses. The deal includes an option for 180 million additional doses. Considering Europe's vaccination situation, it's reasonable to imagine the countries ordering the extra doses -- and eventually more.

CureVac has more than just a vaccine. It has the ability to produce a great number of doses. In fact, CureVac already is manufacturing its vaccine so that it will be ready to meet demand if European regulators give it the nod.

The company has made scaling up a priority. It plans to produce as many as 300 million doses this year and one billion doses next year. CureVac has in-house production capacity. But the company has also built out a manufacturing network including major names such as Wacker Chemie and Novartis. Working with a network of experts may minimize the risk of supply chain disruptions. And CureVac expects to open its own large-scale production facility in the second half of 2022.

This point could win over countries and healthcare systems that have struggled to distribute and store the Pfizer and Moderna vaccines.

CureVac could become a leader in the European coronavirus vaccine market. And that could lead to billions in revenue. A Reuters report late last year said the EU would pay 10 euros ($12.06) a dose for a CureVac vaccine. That means revenue of more than $2.7 billion from just the initial order.

I like the revenue prospects. And I like CureVac's cash position. The company at the end of December had more than $1.59 billion. And it raised $517.5 million in a share sale earlier this year.

The one element that would make me a bit cautious is the fact that CureVac will rely on the coronavirus program for quite a while. It's other pipeline programs are all phase 1 or earlier. So, chances of revenue from other products are years away. And that's why this biotech stock is best left to aggressive investors.