Please ensure Javascript is enabled for purposes of website accessibility
Log In Help Join The Motley Fool
Free Article Join Over 1 Million Premium Members And Get More In-Depth Stock Guidance and Research
By Keith Speights - Apr 22, 2021 at 6:01AM

AstraZeneca's pain is resulting in a big gain for Pfizer and BioNTech.

Pfizer (PFE -1.28%) and BioNTech (BNTX 2.24%) announced Monday that they're supplying the European Union (EU) with an additional 100 million doses of COVID-19 vaccine Comirnaty (BNT162b2). The European Commission exercised its option to buy these doses under an existing agreement signed in February. This move brings the total doses the two companies are supplying to EU members to 600 million.

Based on the price per dose already previously agreed upon, this additional order will boost sales of Comirnaty by more than $1.4 billion. And it appears that Pfizer and BioNTech owe thanks in large part to AstraZeneca (AZN -0.67%) for the windfall. 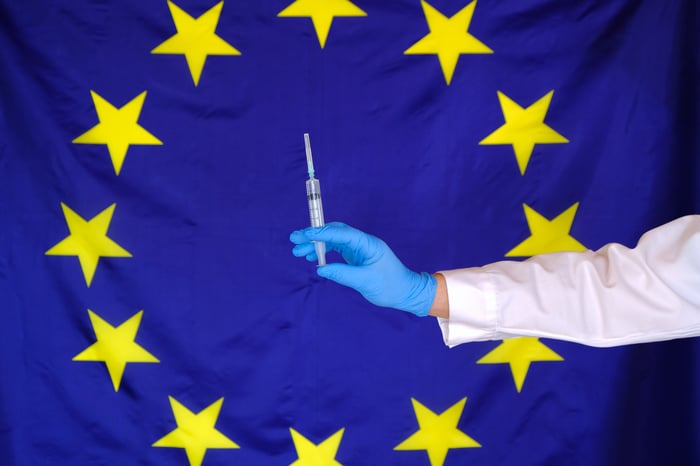 From early on in the race to develop a COVID-19 vaccine, AstraZeneca seemed destined to be the top player in Europe. The U.K.-based drugmaker lined up major supply deals with the EU. Its clinical studies advanced quickly. But things have gone downhill since AstraZeneca's COVID-19 vaccine received EU authorization in late January.

The link between AstraZeneca's vaccine and rare blood clots caused the EU to temporarily place a hold on the use of the vaccine. However, that wasn't the worst of the company's problems. AstraZeneca was supposed to have delivered 120 million doses to the EU in the first quarter; the drugmaker only delivered 30 million doses. It promised to deliver 180 million doses in Q2, but the actual number delivered will be closer to 70 million.

You don't have to read between the lines very much with EU Commission President Ursula von der Leyen's recent statements to pick up the digs against AstraZeneca. In her announcement last week that the EU was talking with Pfizer and BioNTech about obtaining additional doses of Comirnaty, von der Leyen said, "We need to focus on technologies that have proven their worth." She added that the Pfizer-BioNTech team "has proven to be a reliable partner. It has delivered on its commitments, and it is responsive to our needs."

AstraZeneca appears to be finding out the hard way that actions have consequences. Meanwhile, Pfizer and BioNTech are reaping the rewards from their rival's missteps.

A lot more money potentially on the way

The story doesn't end there, though. A lot more money is potentially on the way for Pfizer and BioNtech.

Von der Leyen stated that the EU is beginning negotiations with the two partners to buy another 1.8 billion doses of Comirnaty through 2023. At the previously established price tag, this could be worth nearly $26 billion to Pfizer and BioNTech.

However, Bulgarian Prime Minister Boyko Borissov let the cat out of the bag last week that Pfizer and BioNTech are increasing the price that the EU will have to pay for Comirnaty by more than 60% going forward. Instead of $26 billion, the two companies could make in the ballpark of $42 billion from the new deal with the EU.

Pfizer records the revenue from the COVID-19 vaccine. However, the giant drugmaker shares profits equally with BioNTech, which originally developed Comirnaty.

Pfizer and BioNTech appear to be in the driver's seat in the global COVID-19 vaccine market. Their vaccine demonstrated high efficacy. It hasn't produced the rare yet potentially life-threatening safety issues seen with AstraZeneca's and Johnson & Johnson's vaccines. The Pfizer-BioNTech vaccine also seems to cause fewer adverse reactions than Moderna's vaccine does.

BioNTech's share price has skyrocketed close to 90% so far this year with all of the good news for Comirnaty. It's been a much different story for Pfizer, though, with the big pharma stock up only around 7% year to date. With the major EU supply deal likely on the way and potentially more to come with other countries, investors might not be able to look past Pfizer's attractive growth prospects for much longer.