Please ensure Javascript is enabled for purposes of website accessibility
Log In Help Join The Motley Fool
Free Article Join Over 1 Million Premium Members And Get More In-Depth Stock Guidance and Research
By Rich Duprey - Apr 23, 2021 at 10:32AM

The partnership will be about more than just clothes.

Gymnast Simone Biles captured the attention of sports fans for her talent both on the mat and off, such as the backflip she performed on the pitcher's mound in Houston before throwing out the first pitch during the 2019 World Series.

Now she's attracted the attention of Gap's (GPS -1.72%) Athleta brand, which announced today that it has signed the sports star to represent the athleisure apparel company under a long-term contract. It's a major blow to Nike (NKE -0.09%), as Biles was a brand ambassador for the sporting goods company, though she never figured prominently in any of its ads.

Her relationship with Athleta promises to be much different, as The Wall Street Journal reports she will have her own line of athleisure clothes and the apparel company will support a gymnastics tour she will be launching separately from the USA Gymnastics tour.

Biles told the Journal she felt she was partnering with a company that was "truly for women by women." 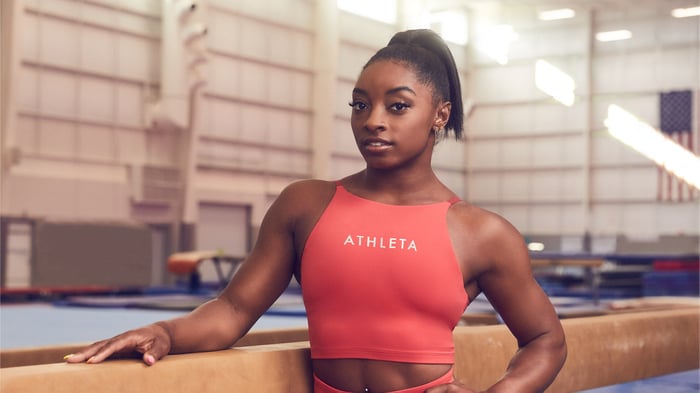 Nike collects sports stars like some people collect beer cans: They acquire them and then keep them on a shelf to look at. Biles was often overshadowed by other female sports stars in Nike's portfolio, such as tennis star Serena Williams and Caster Semenya, the South African middle distance runner.

Biles was not necessarily critical of Nike, but said she believes "Athleta is committed to diversity and inclusion, of all women, backgrounds, ages, sizes, abilities, and races."

Athleta CEO Mary Beth Laughton issued a statement saying, "Simone believes in championing the next generation of female athletes as much as we do, and we are confident this partnership will continue to build community with our customers and enrich our brand."